In a bid to clear the air over an alleged secret agreement to have China use the Ream Naval Base in Preah Sihanouk province, the Defence Ministry on Friday took dozens of journalists to tour the site.

The Wall Street Journal last week published a report alleging that a secret deal had been struck between the two nations for China to use the base, an allegation vehemently denied by both countries.

“The pact–signed this spring but not disclosed by either side–gives China exclusive right to part of a Cambodian naval installation on the Gulf of Thailand, not far from a large airport now being constructed by a Chinese company,” the Journal said in its report.

On Friday, about 70 local and foreign journalists were given a tour of the base. No signs of Chinese nationals or warships were seen.

General Chhum Sucheat, spokesman for the Defence Ministry, told the journalists that what the Journal reported was misleading.

“You journalists are our ears and nose. You can see we here have nothing to hide from foreigners who accused us of [the deal with China],” Gen Sucheat said. “Although this military area is controlled by RCAF, we cannot hide anything because there are satellites.”

“Here is our territory,” he added. “We do not allow any foreign military [forces] to be stationed.”

Gen Sucheat added that the government wants good cooperation with the US, despite suspending military exercises with it.

“We have not been instructed to minimise relations with any countries, we are to maintain global relations,” he said. “We previously suspended military exercises with the US because we were busy with the election and anti-drug campaigns.”

Vice Admiral Ouk Seyha, commander of the naval base, said the government is in full control of Ream Naval Base and the constitution does not allow the presence of foreign troops in the Kingdom.

“I am in control of Ream Naval Base and we monitor general situations, as well as issues raised by Prime Minister Hun Sen and Defence Minister Tea Banh,” he said. “Cambodia has a constitution that stipulates sovereignty. No foreign military [forces] can be stationed in the Kingdom, including China.”

At the base, reporters were also taken to a building where a sign proclaimed: “This building was given by the people of the United States of America as an expression of friendship and cooperation”. Inside were US-donated speed boats with guns.

The US has expressed concern to Cambodia over plans for Ream after its offer to pay for renovations at the facility was turned down by the Cambodian government in June.

“This causes us to wonder if the Cambodian leadership’s plans for Ream Naval Base include the possible hosting of foreign military assets and personnel,” US Embassy spokeswoman Emily Zeeberg said in a statement earlier this month.

Gen Sucheat said the building in question would be handed to the Cambodian navy, not to the Chinese.

Government spokesman Phay Siphan, who also attended the tour, said there was never any presence of Chinese nationals at the base.

“We have a small naval base and our goal is not to provoke war with anyone,” Mr Siphan said. “What we are doing here is killing fake news.”

“We don’t want the United States, or any other country, to be our enemy,” he added.

He said that Cambodia has a policy of permanent neutrality and non-alignment. He said any military alliance or pact incompatible with the policy will not happen.

“Cambodia is not under the influence of other countries because we respect our constitution,” he said. “So, no land has been provided to a foreign military [force]. We are the owners of the naval base.” 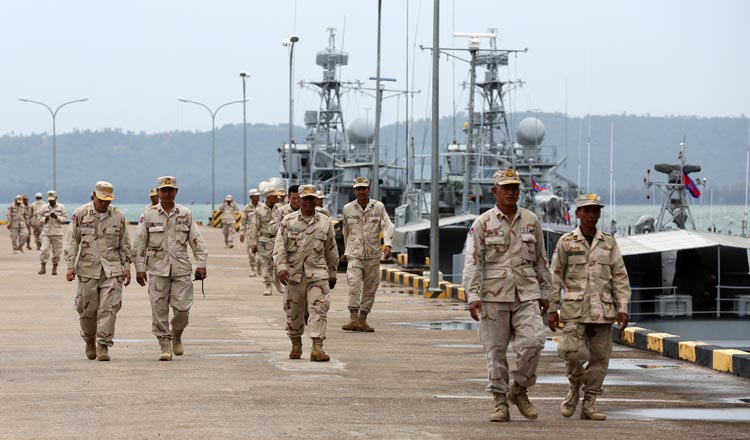 In Phnom Penh, Defence Minister General Tea Banh on Friday reiterated that the government will only work with foreign military forces within the framework of the United Nations.

Gen Banh said the government has firmly implemented its foreign policy to defend its national interests, as well as boost friendship and cooperation with friendly countries.

He added that the Journal report, which suggested the agreement would also allow China to use an airport as a base for troop garrisons, weapons storage for a duration of 30 years, was false.

“This publication was done with ill intention to undermine peace and security in Cambodia as well as the region,” he said, adding that American officials, as well as journalists, should study Cambodia’s constitution.

Political analyst Lao Mong Hay yesterday said even though it was good for the Defence Ministry to provide the tour, the presentation might not be enough to discredit the Journal’s report.

“The suspicion would linger on and the US pressure on Cambodia will stick to its perpetual neutrality and maintain equidistant relationships with it and with China would not be eased off,” Mr Mong Hay said. “Perhaps, a better way to put all this matter to rest once and for all would be for the prime minister to […] call for the creation of an international three-member mission to verify the country’s neutrality.”