Sixty-one years ago, the Cambodian-Chinese cooperation treaty was signed by late King Father Norodom Sihanouk and then-Chinese Premier Zhou Enlai, and both nations continued to strengthen ties and eventually established a ‘Comprehensive Strategic Partnership of Cooperation’ in 2013.

Every year in July, the two countries celebrate the anniversary of diplomatic relations, marking ties established on July 19, 1958. A bilateral meeting to discuss the ties between the two nations was first held in 1955 in Indonesia during the Bandung Conference, which was attended by His Majesty King Sihanouk.

Suos Yara, a member of parliament and CPP spokesman, on Wednesday said that Cambodia and China relations actually date back 2,000 years.

He said historical records written by an ancient Chinese envoy, Zhou Danguan, in his book titled Costumes of Tchen La, which shed light on 13th century history, noted the prosperity of the Angkor Kingdom, local culture and daily life of Khmer people.

“The Ming Dynasty navigator Zheng He (or Cheng Ho) made a stop in Chenla [Kingdom] several times during his voyages to explore the world,” Mr Yara said. “Zheng He visited the Angkor Wat ruins and studied the architectural style and layout of the ancient temple.”

“In February 1956, Prince Sihanouk paid his first state visit to China. His first visit to China was welcomed by the warm hospitality of Premier Zhou Enlai. It was a milestone in deepening mutual trust and bilateral ties,” Mr Yara said.

He explained that to show support for China, Cambodia recognised the People’s Republic of China on July 19, 1958.

“Cambodia even campaigned for the expulsion of the Republic of China (Taiwan) at the United Nations in 1960,” he said. “This sets a strong foundation for Cambodia-China bilateral relations. The Cambodian government under the sole leadership of the Cambodian People’s Party renewed bilateral relations in the 1990s. Look where we are now since.”

“Both countries are flourishing and the tie is stronger than ever,” he added.

“Since the 1990s, the relationship between the two parties has been cordial, mutually beneficial with mutual respect.” Mr Yara said. “Since President Xi Jinping’s programme to promote a community of a shared future for mankind, the two political parties have worked hard to promote a common understanding and resolve issues and challenges for the sake of our people.”

“The parties share a vision to drive our countries forward in an uncertain world,” he added.

Mr Yara said Cambodia and China are benefiting from the current relationship.

“Both countries are mutually benefiting from strong relations rebuilt since the 1990s and was laid out by late King Father Norodom Sihanouk. Our economies are intertwined. The future is bright for us all,” Mr Yara said.

“Cambodia has been a very close friend to China over the past years, and we have been close neighbours and we have successfully supported each other for many years on important issues, [including on] bilateral [relations] as well,” Mr Wang said. “And Prime Minister Hun Sen is a friend of ours, the King [Norodom Sihamoni] as well as [late] King Father (Norodom Sihanouk) [was] also a friend of ours.”

During Mr Hun Sen’s trip to China in April to attend the annual Belt and Road Forum in Beijing, Cambodia inked nine deals with China, including the Action Plans on Cambodia-China Community of Shared Future.

“At the moment, the China and Cambodia relations has reached a political high, as you might know, we have recently signed an MoU on the establishment of our

‘China-Cambodia Community of Shared Future’, and actually Cambodia is the first country in the world who had ever signed this kind of document with China,” Mr Wang said.

“We have a high level of political trust and we have also been supporting Cambodia [in terms of] international development,” he added. “We have been providing a lot of assistance to them and we have a lot of [ongoing] cooperation, we have helped Cambodia to build over 8,000 kilometres of roads and several other [projects], such as power stations and infrastructure.” 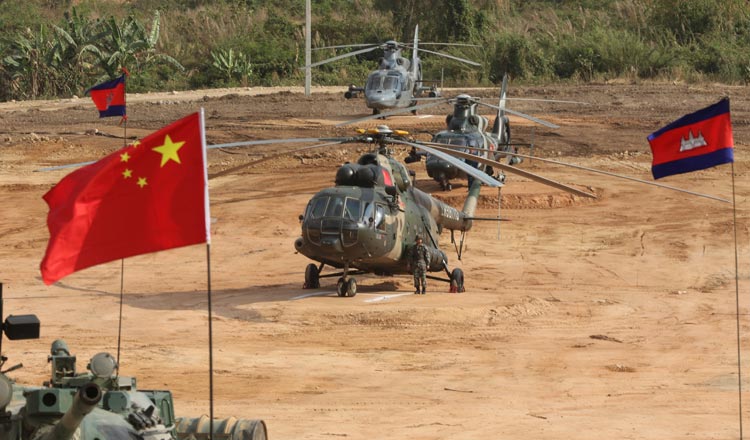 Mr Wang also said that Chinese assistance is “unconditional” and that China does not interfere with the internal affairs of other countries, including Cambodia.

“For China, whether it’s a cooperation or assistance, it’s unconditional. It is not like many western countries,” he said. “When they give us assistance, they ask for something in return. They will ask you to be more democratic, to be more open, to respect human rights and release all [political] opponents.”

“But China has a philosophy,” he added. “We believe that we should let people decide on their own.”

Chheang Vannarith, president of the Asian Vision Institute, yesterday said that the Cambodia-China relationship has grown remarkably over the years

“Now China is the key economic partner as well as strategic partner of the Kingdom,” Mr Vannarith said. “The areas where both countries need to further strengthen are people-to-people ties and the transfer of technology and knowledge from Chinese companies to local companies, especially SMEs.”

“To some degree, Cambodia has been punished by the US and some European countries due to its cozy ties with China. The China factor has loomed large in the US’ foreign policy towards Cambodia,” he added.

Kin Phea, director-general of the Royal Academy of Cambodia’s International Relations Institute, said the Cambodia and China relations is “bitter sweet” as China backed the Khmer Rouge Regime in the past.

He added that after the Paris Peace Agreement in 1991 and when Cambodia held its first election in 1993, when royalist political party Funcinpec, led by Prince Norodom Ranariddh, won the election, China became closer with Funcinpec than the CPP.

“After the clashes in 1997, we saw Cambodia receive pressure from the international community due to its internal affairs, we saw then that China appeared to provide assistance to Cambodia, in both military and economy,” Mr Phea said.

Currently, the European Union and the United States are demanding the government to restore democracy, human rights and fundamental freedom in the wake of former opposition CNRP being dissolved and press and civil society freedom cracked down upon.

Mr Phea said that the pressure from the West would move Cambodia closer to China.

“I think more pressure from the West would push the relationship between Cambodia and China closer, because if they [the West] pressured Cambodia, it means they are pushing away Cambodia,” Mr Phea said. “We are not a lonely state; we need to find backing.”

“Cambodia cannot depend on only one side, if you kick me out, Cambodia is a sovereign state. We have our own choice,” he explained.

In his speech during the 60th anniversary of diplomatic ties organised by the Chinese embassy last year, Mr Hun Sen expressed his gratitude to Beijing for its financial and technical support on human resource training and infrastructure development in the Kingdom.

He noted that the historical friendship was jointly established by the late King Father Sihanouk and China’s Chairman Mao Zedong and Prime Minister Zhou Enlai, as well as Chinese leaders in previous generations who have constantly developed the relations until the establishment of the Comprehensive Strategic Partnership of Cooperation.

“Over the past 60 years, leaders of the two countries have always made efforts to maintain the friendship, and overcome many obstacles in order to lead the countries and the citizens toward progress, prosperity, and harmony,” Mr Hun Sen said.

Bodies of two soldiers who fell into river found

Officials double down on Ream Naval Base agreement denial