The committee has been ramping up crack downs on illegal logging across the Kingdom, specifically in Mondulkiri province, where Mr Sam Ol was arrested on July 9 as it began dismantling his large-scale illegal logging operation.

The committee had already identified several provincial officials and directors of companies to be questioned over possible links to Mr Sam Ol’s operation. 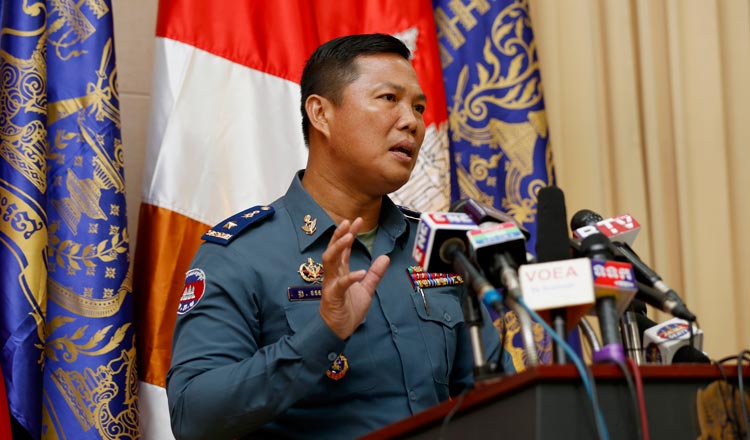 During a press conference yesterday, NCFCP identified two more companies granted Economic Land Concessions in the province that are suspected of colluding with Mr Sam Ol and also running their own illegal logging operations.

The two companies are: Chinese-owned firm Vichary and Cambodian-owned Nayna.

Brigadier General Eng Hy, spokesman for the committee, noted that five companies are under investigation as the case moves forward.

He said that the five companies will face legal action if they are found to have committed logging outside of their ELCs.

“If these companies are found to have committed something illegal, we will cancel their licenses or end their contracts,” Brig Gen Hy said. “But please allow us to conduct our investigation first. We are processing it and we cannot just go and shutter operations now.”

He noted that the five companies are suspected of hiring local villagers to cut trees outside their ELCs before transporting them into the concessions to be masked as legal timber.

A sixth company, Chinese-owned Lim Royal Joint Stock Company Limited, is also being investigated, but is not yet suspected of any illegal activity.

“We are seeking those nine suspects, but they are at large,” he said. “That’s why we are asking for arrest warrants.”

Srun Darith, a secretary of state at the Environment Ministry, yesterday said ministry officials are reviewing the companies.

“Five among six companies that NCFCP is investigating were found to have been involved in illegal logging,” Mr Darith said. “So the question is whether we should end their contracts or not.”

He noted that in order for ELCs to be cancelled, NCFCP will have to review legal norms, ELC implementation and whether a crime, such as illegal logging, has been committed.

“We are reviewing each company, one-by-one,” he said, adding that Prime Minister Hun Sen in 2012 signed a directive declaring a moratorium on the granting of ELCs.

Mr Darith said companies that received ELCs before May 2012 can only clear land within their specified areas. He noted that villagers hired by companies to conduct illegal logging should stop.

“The media reports that the authorities only crack down on minor offenders, while major suspects are not arrested – they say petty loggers cut trees to make a living,” Mr Darith said. “If we say it like this then it means we are encouraging villagers to commit forestry crimes.”

According to Suon Sovann, director of the Forestry Administration’s Legislation and Law Enforcement department, the government is attempting to reform laws and regulations to protect the Kingdom’s natural resources.

Mr Sovann said Mr Hun Sen issued a sub-decree in 2016 to hand over control on which company gets an ELC to the Agriculture Ministry, while the protection of natural resources was tasked to the Environment Ministry.

He noted that from 2014 to last year, the FA worked with various officials to crackdown on about 8,600 cases, adding that 5,716 were sent to court.

General Sao Sokha, commander of the National Military Police, yesterday warned members of NCFCP not to collude with logging criminals.

“Our crackdown is not done yet; it’s only beginning,” Gen Sokha said. “We have many other cases to crack down upon.”

He noted that any vehicles seized during the raids and suspected of being used to transport illegal wood must be destroyed.

“If you find anyone transporting timber without permission, please confiscate the timber, hand them over to the forestry administration, and put the suspects in handcuffs,” Gen Sokha said. “If you don’t have TNT, use gasoline to burn [the vehicle] and use a machine to cut it into pieces.”