Before peace was introduced through integration in 1998, Cambodia had been through numerous wars and conflicts, with genocide of the Khmer people from 1975 to 1979. There are plenty of sources that the younger generation or international parties can access to identify the facts and root causes. However, arguably most of the sources are written as academic text, not exactly an attractive paperback to draw readers.

This is one of the major aspects that intrigued Ek Tha, Vice-Chairman of the Royal Government Spokesperson Unit, to pen a fiction called, “Fight the Enemy, Find Love” which was published recently.

Starkly enough, the plot of the book opens with the Hanoi Radio crackling a broadcast of prominent defectors calling for Vietnamese assistance to liberate their Cambodia – before the Preface, Author’s View, Acknowledgements, Contents (12 chapters)

His Excellency Ek Tha, who amazingly finds time in his passion as a paperback writer, shares his writing journey with Say Tola of Youth Today. YT: How did you come up with the inspiration to write a book mixing historical episodes of Cambodia and Vietnam with crafted fiction?

There are many aspects that inspired me to write this novel by weaving together parts of real history about Cambodia and Vietnam along with romance and love, as the book unfolds.

Recalling that, I personally have read many publications both in Khmer and English. Most of the publications are about facts and history, fighting and war, loss and suffering, one tragedy after another… from the domestic fallout in Cambodia, to the Vietnam War, from the fall of Khmer Rouge in 1979, and followed by ten years of Vietnamese troops working alongside Cambodia’s forces to prevent the return of Pol Pot to power through the 1980s… too much was too much already about the past penned.

I sometimes get bored myself from reading the same facts with no colour, not even one paragraph, in the whole book. I started to question if all readers like reading history? Because I noticed that some books on history look so untouched off the printing press, with few readers sitting there for months and months in the library. If this was the case, I wondered how people learn about the past? Then I had an idea on how to attract readers to learn some history by weaving together some facts and transforming it into a solid fiction of romance along with a sexy headline (Hence his novel entitled: Fight the Enemy, find Love).

Like I said in the book that, many foreign writers over the years have penned numerous publications about Cambodia’s recent painful history, including the turbulent political events, the rise and fall of Cambodian leaders, and these writings have assisted in making Cambodia known to the outside world. Other foreign authors have written about the magnificent culture and ancient traditions of Khmer civilization; then and now. Photos and films about the Kingdom have also been displayed on the global stage, yet only a few fiction novels are to be found about the personal lives of Cambodians and their loves and passion for a harmonious life.

As a son of Cambodia’s recent tragic past, I myself went through both bad and good experiences and lived as a refugee in Vietnam in the 1970s. I subsequently learnt much from the war veterans of different factions who had experienced conflict. I should write a novel about it to tell the global audience about the past and I hope such a novel can help some to remember parts of Cambodia’s and Vietnam’s historical facts.

YT: What was the motive behind your book portraying a relationship between a Vietnamese solider and a Cambodia lady? I want to show that as human beings, we can solve our differences through peaceful talk, friendship, and loves. As human beings, we should not view each other as enemy since we live under the same sky, of a shared sun, and shared earth. There is no point in killing each other, nothing is more precious than life. Such a concept is always on my mind, head and heart. I want the people from conflict sides, the warring factions to put human interest above all. The same is true, I want Khmer Rouge to see the Vietnamese side as friends since fighting and violence did not help them to obtain peace of mind and live together in harmonious environment. That is why I portrayed the young Vietnamese soldier, who gets lost in the jungle, meeting by accident near the waterfall with the daughter of the Khmer Rouge’s commander in the deadly battlefield, and setting a good example of how they can convince each other and gained mutual trust months later to put their differences aside. I therefore provided details on what brought Hung the Vietnamese soldier to choose girl over gun. It was a crucial decision where love won the day — had the soldier named Hung taken the life of the Khmer Rouge commander’s daughter, Reach Bopha-Ek, while she bathed at the waterfall, the crack of a bullet shattering the quiet of the jungle would have attracted Khmer Rouge hard core fighters to get rid of Hung in retaliation.

YT: And how did you manage to write and complete all those plots?

It is not difficult to concoct such a plot for me because when I was 18 during the civil war in Cambodia in 1980s, I travelled to various parts of the country during my school break. I would hop on a Russian bus with Cambodian troops from the south of Cambodia to the capital. Or I get on a French colonial train with veteran soldiers from Phnom Penh to Battambang and sometimes by horse cart from one village to another.

When I was young, I saw lots of things new to me. I made many friends and a couple of times encountered the enemy, the Khmer Rouge; the train came under attack on my way from Pursat to Battambang one late afternoon. From those days of chit-chat with soldiers, both Cambodian and Vietnamese, I learned from them a great deal of good news and grave ones. Recalling all of that, we talked and laughed, some cried as they were sent to battle fields to fight Khmer Rouge and leaving their wives and mothers behind, in Cambodia and Vietnam. And after Cambodia obtained full peace in late 1998, I worked as journalist for Reuters News Agency, and this added another flavour, more ingredients when I wove those memories into a novel fiction that I could not think of any better title but fight the enemy, find love.

YT: How many book have you written so far?

I have thus far written two books, including the historical book entitled: The Factors Contributing to Cambodia’s Civil War 1950s- 1980s; Lessons then & now, and the current novel.

As I myself went through both bad and good experiences and lived as a refugee in Vietnam in the 1970s, I subsequently learnt much from the war veterans of different factions who had experienced conflict from the 1970s through to the 1990s. These veterans inspired me to write something different; something I call a fiction-novel. 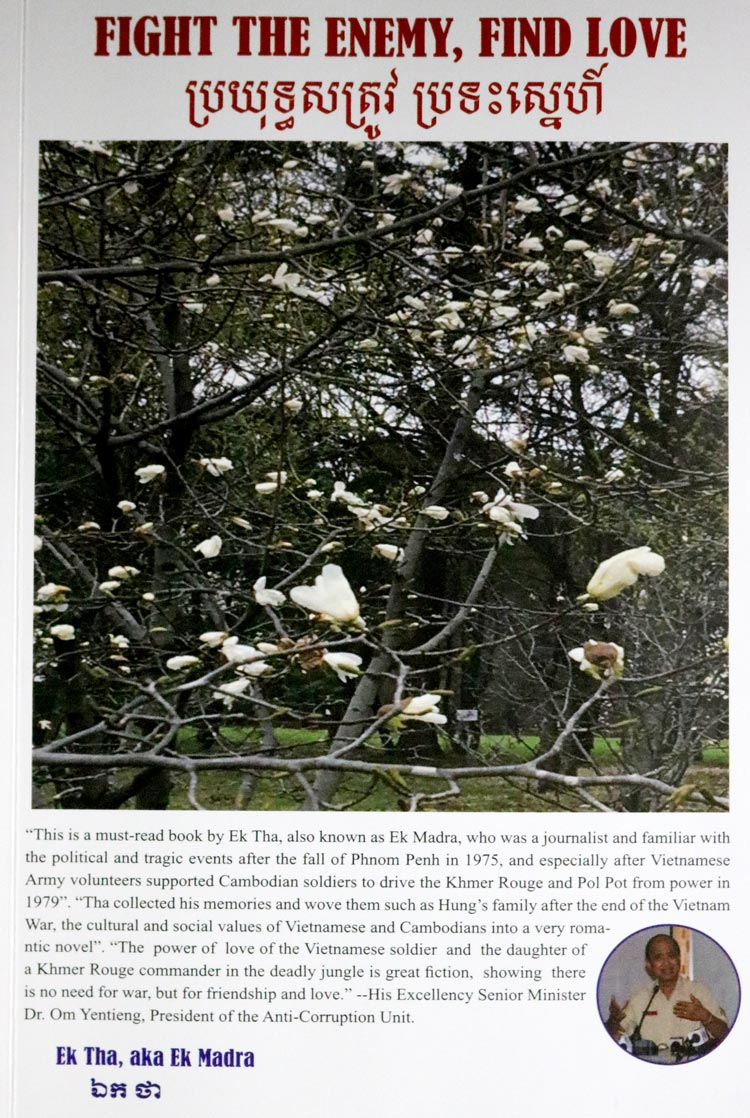 I would like to show to a global audience that despite the losses and tragedies experienced during this time of horror, there was also love and true friendships. I wish to see more foreigners hear, see and read good things about Cambodia rather than the limited perspective of the Killing Fields, the Mekong River, and Angkor (Wat).

YT: As xenophobia is already rooted in Vietnamese and Cambodian, what is your actual intention of this literary piece?

The xenophobia, chauvinism, racism are created by humans I do not want to see. That is why I recall the memories cited by former warring factions and transforming the facts into fiction, into a novel to change the mind-set of the two peoples. I want to see both countries live side by side as good neighbours.

I therefore portrayed the life and love of the young lovers, in the novel, are the most important of all for both of them. Bullets can bought in markets, but not their life. They set a great example of how friendship can bridge love and how love can cement their knot of eternal love in the midst of mayhem between warring factions Khmer Rouge and Vietnamese. I hope the people from Cambodia and Vietnamese alike could learn something from reading this literary novel and seek ways to address their differences as brothers and sisters.

YT: As you might know, the culture of reading amongst young generation is low in Cambodia. How can you attract them to read a story about the past?

That is part of my intention to write a novel to attract young readers given the fact that the culture of reading has been declined significantly and this need to improve. Like I said before that, I get bored myself from reading the same facts with not one colourful paragraph in the whole book. I started to question myself: do all readers like reading history? I noticed that some books leaning on history look untouched despite sitting on the shelves for months and months in library.

If it was the case, like I thought how people learn about the past? then I had an idea on how to attract readers to learn some past history by weaving together some facts and transforming it into a solid fiction of romance along with a sexy headline. I also get support blurbs from well-known and respected people to have their comments printed on the both covers. This is part of my strategy to attract young readers to read the book. And it is more than just a novel itself but part history of both countries.

YT: Are you planning to have a Khmer version of this book?

There is no doubt about it. I will write this novel in Khmer version and I believe that it will be more interesting since I am Khmer and speak the language. I can play around with phrases and terms that make more sense in Khmer. I already translated the headline below the English ones and it has already intrigued quite an audience who learned from a Facebook posting by Information Minister Khieu Kanharith who received my book last week.

I will publish a Khmer language of this book at a later date. Last but not least, I encourage Khmer/Cambodians to engage and participate in preparing material for publications including writing about Cambodian historical records, cultural and political values or writing fiction novels since they speak the Khmer language and understand the meaning of slang usage and cultural expressions. This will contribute to help many foreigners, who are not familiar with the Kingdom of Wonder, to gain a better understanding of Cambodia.