The General Immigration Department said two accused South Korean money mules detained at Siem Reap International Airport confessed that they were hired by unnamed Chinese nationals to bring about $2.2 million in cash into the Kingdom.

The two Korean nationals were detained on July 7 after immigration police found undeclared $2.2 million in bundles of $50 and $100 notes in their belongings.

GID director General Kirth Chantharith yesterday said the two South Koreans confessed they were employed by the Chinese nationals to carry the money into the Kingdom.

“The pair said they were hired to carry the money [$2.2 million] by Chinese nationals whose identities were unknown,” Gen Chantharith said. “They [the South Koreans] were handed the money by a group of people who were not the owner of the money.”

He noted that the practice of hiring mules to carry cash into the Kingdom is new and that a proper investigation is needed to prevent it from happening again in the future.

Gen Chantharith said a total of nine suspected mules have been arrested and charged with money laundering, including seven Chinese nationals and the two South Koreans.

“Those suspects said they wanted to use the money for investments, running businesses, and buying land,” he said. 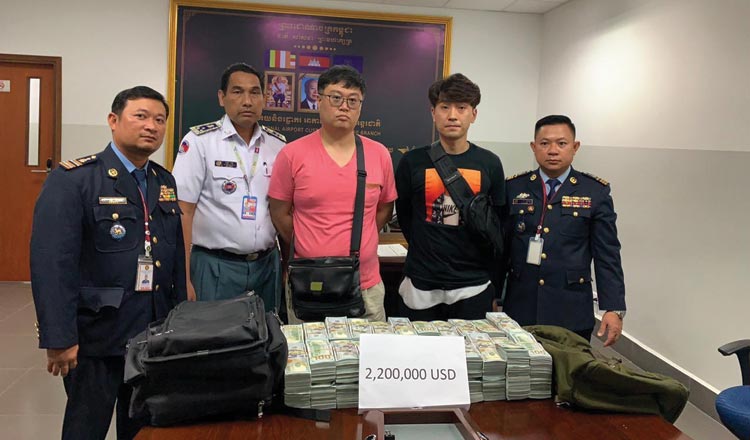 During a meeting yesterday, Interior Minister Sar Kheng reiterated his call on the authorities to strengthen action against money laundering and other cross-border crimes, including terrorism.

“We must prevent all forms of money laundering at all border gates, including at airports, seaports and land checkpoints,” Mr Kheng said. “We must no longer be put on blacklists of countries that are easy to money launder in.”

He then ordered police officers on all levels to enforce the law in order to restore the country’s reputation on the international stage.

Since February this year, authorities​have ratcheted up their war​against the crime, seizing​nearly $7 million in cash.