Home - A Genuine Collector at Heart

A Genuine Collector at Heart

CALL him “crazy” and Lee Peng Heng loves it. He collects very old things, from seasonal articles to vintage cars. Those items are worth no more than scrap to many Cambodians, who have been through years of civil wars and a genocidal regime. But, Peng Heng is far from discomfort with the label as he believes life could only be spiced up with uniqueness. In fact, onlookers are likely to be shocked at the real value of his collection, which could be hundreds of thousands or pushing seven figures. Yet, the 53-year-old collector says he is not doing it for profit but for the public good. Story by Taing Rinith.

From outside, the Museum Café, located in the middle of Street 124 and opened in 2017, looks no different from thousands of other coffee shops in Phnom Penh. Yet, the first few steps into the modest-sized room gives visitors the same feeling of entering a historical museum and for the elders, a nostalgic trip back to their childhood.

The first thing that will catch the eye are two vintage motorised bicycles with gasoline motors, mounted on a wall. They were manufactured by Japanese companies, probably a decade before the breakout of World War II. Next to them are old paintings and pictures, including one showing the late King Norodom Sihanouk riding a bicycle in his prime, as well as cuckoo clocks from European countries.

There are glass cabinets of all sizes, in the hole-in-wall café in which many more vintage items are on display, from rows and rows of vintage cameras and oil lamps to instruments and toys from around the world, grandfather clocks and typewriters. Some visible rare articles include a Leica III (1936) DRP Ernst Leitz Wetzlar Camera, several ship telescopes or spy-glasses used by Norwegian and British captains in the 1700s and 1800s and an Edison Standard Phonograph with all accessories.

“There are hundreds of articles here, but they only make up five percent of my entire collection,” says Lee Peng Heng, a businessman and owner of Museum Café, at a table fashioned from a garment factory sewing machine, among tens of vintage coffee grinders, teapots and telephones.

Another five percent of the massive collection, which Peng Heng spent nearly two decades to acquire, is stored on the top of the café while the rest are at his house in Siem Reap. While buying most of his collectables online, Peng Heng also travelled the world to pick them – even if it meant running out of money for food and accommodation on some of his trips.

“I feel depressed if I cannot add more things to my collection,” Peng Heng confesses. “Maybe I am addicted to it.”

“No! Don’t ask me which one I love best. Each and every one of them is important to me.”

Peng Heng has always been interested in vintage items since he was a boy, but he did not start collecting them until 1998, when a prolonged civil war in Cambodia came to the end. The collector says it was a visit to a historical museum in Vietnam that first inspired him on the trek to collectables.

“That museum displayed so many vintage items,” he says. “Then I found out that there were museums like these around the world, except Cambodia. And then I asked myself, ‘why shouldn’t I start the first one here?’ ”

Peng Heng first started collecting vintage cars, such as Volkswagen and Citroen, and after a while sold some of his cars and used the money to buy classic bikes, including Mobylette and Vespa, which had been popular in Cambodia during its post-protectorate period. Before long, he already found himself the owner of countless vintage pieces.

“It was very difficult at first because I did not know anything about old items,” he says. “Sometimes, I fall for a fake article, but as time goes by, I learn more and more about them so that no one can deceive me now.”

Peng Heng counts himself lucky because his wife Meng Sokha supported him although she knows little about antiques – not to mention the occasional financial problem they face.

“To be honest, we never have any money in our savings because he always uses it to buy these items,” Sokha says while brewing a cup of Americano behind an Astoria coffee-making machine on the counter. “But, he is following his heart. As long as he is happy doing it, I support him.”

“And it is never boring listening to him talking about the new items he purchased.” 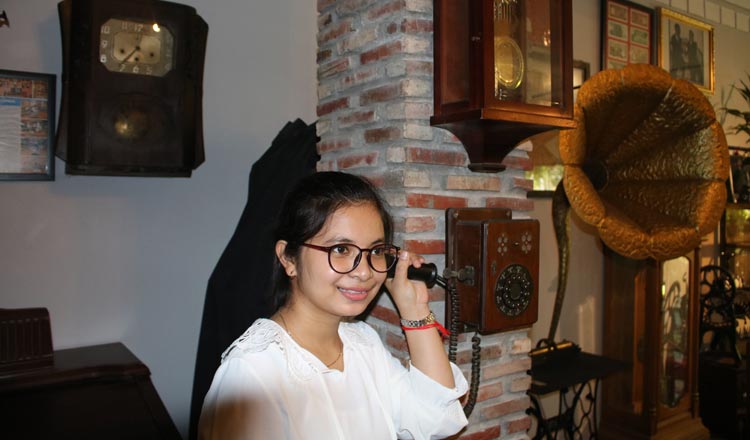 As his business improved and collection expanded, Peng Heng opened Vimean Sokha Historical Museum in Phnom Penh’s Sen Sok district to exhibit his collections, but it failed after a few years.

“Having been through decades of civil wars and almost four years of Khmer Rouge regime, characterised by mass killing, starvation and slave labour, Cambodian people seem to focus most on their survival at the present time,” Peng Heng notes.

“During the difficult years, antiques and vintage items, which could be collectables and thus very valuable, were worth no more than scrap.”

Despite being downhearted, Peng Heng still wanted Cambodians to enjoy browsing and collecting things from the past like he does because he sees it as a worthy contribution to the country’s tourism and cultural scene. Then his wife, Meng Sokha, understanding the expanding “coffee culture”. She suggested turning the museum into a café, and it was not long before their Museum Café was opened.

“The café is unique, in a very good way,” says Sok Narith, an office worker and a regular customer. “The vintage items give a relaxing, classic atmosphere while you can spend hours looking at these collectables without getting bored.”

Next to Peng Heng’s café is his trustee garage, which also functions as his workshop. It houses several vintage bikes and bicycle needing restoration, including a Volkswagen, a 1938 V1010 model.

Peng Heng claims that the car, which was bought from Steung Treng, used to belong to Sin Sisamut, the most beloved Khmer singer of all time whose velvet voice and lyrics earned him the nickname “Golden-Voiced Emperor”.

Other remarkable items in his inventory are a reproduced Benjamin Franklin’s Clock produced by Thwaites and Reed Ltd., with a limited edition of 1000, and a camera used to take the pictures of the prisoners at S-21 Security Centre, currently known as Toul Sleng Museum.

Peng Heng says many foreigners have made him offers, amounting to hundreds of thousands of dollars, but he always refused to part with them. A true collector, he adds, is tied to his collection like an ‘invisible umbilical cord’ where things can go bump in the night.

“I believe in spiritualism, and I have felt that I have been connected to the spirits of the owners of things I bought,” he says, adding he always gets goose bumps whenever he talks about the spirits.

“Occasionally, I hear their voices and I sometimes am witness to the paranormal, such as the phonograph playing by itself and a broken clock working for a while.”

The couple is set-up to open a new museum in Siem Reap, “where people want to visit museums, unlike in Phnom Penh”. He hopes to promote the local market for the collectibles and would like to ask the government, especially the Ministry of Tourism, to “give me a hand”.

“Without old things, there are no new things, and while older people are wise, old items could be priceless,” Peng Heng concludes. “We have to bear in mind that all of them have at least one story behind their existence, yet their value is eventually to be decided by humans.”