For his entire life, Prum Vannak Anan has endured dreadful hardship: growing up in extreme poverty, being exploited by an abusive stepfather, becoming a child soldier and again living under the abject poverty line. Yet, none of those is akin to what he encountered during the several hellish years he worked virtually as a slave on a fishing trawler in Thailand. Today, back to his Cambodia homeland and once again a free man, Anan is using drawing, his passion in life and what he does best, to tell his story and warn people of the nightmare that could stalk them when leaving their home country for job opportunities. This is a rare-to-be-told narrative of human angsts, greed, and corruption, writes Taing Rinith.

The sun seared an area of the Malaysian sea, in which a Thai fishing fleet is stationed. That was a very calm and serene morning, and it was hard to imagine that a storm had raged the night before, so bad that the entire crew had to pray to the ‘gods of the sea” for their survival.

On one of the diminutive trawlers, a small half-naked man, with shoulder length black hair and a muscular body covered with tattoos and scars, is smoking and scanning the horizon. The sight being the only scenery he espied in the past three years. The trawler, albeit small in size, had long ago become his entire world. This man’s name is Prum Vannak Anan, and he was one of the Cambodians enslaved on this boat.

Later that day, Anan, along with other 15 workers, were as usual hauling a net into the boat and sorting out their catch. A foreman, known as hou na, a cruel and violent Thai man, was assigned to supervise their work. He would beat mercilessly or threaten to kill anyone slowing down or about to collapse.

The slaves were forced to labour from dawn to dusk and even at night while receiving only a little food and drinking water, as payment if you would, and three hours of rest per night. Many of them had chosen to use meth “for extra strength” and to ease their hunger pangs and exhaustion, only to eventually die from drugs after a long time of sleeplessness and walking nightmares.

“It is a cruel death,” Anan, who had also used it for a while, wrote later.

In a spot at the back of the boat, another worker was taking a “toilet break”, using a rope harness to hang over the stern. While doing his business, the man was trembling with fear because even the call of nature is a matter of life and death. Anan understood this precisely because he escaped death once when the rope snapped and at another time, staring at the jaws of death when a leaping shark tried to bite his rear. 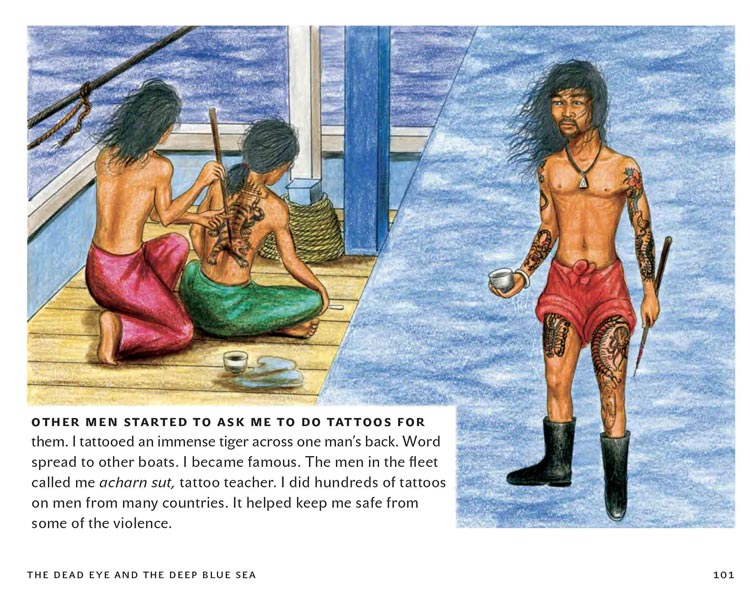 In fact, death was a constant companion for the fishermen, especially the uncared slaves on the rig. Apart from diseases caused by malnutrition and lack of medicine, and overwork, accidents such as a snapping cable and getting entangled in the net could mean certain death every single day. As if those were not enough, the workers were also killing one another. Anan once witnessed a man beheading his best friend.

However, Anan trudged on for sheer survival, kept alive only by his burning desire to return to Cambodia and be reunited with his beloved wife. More importantly, he longed to see his young daughter, whom he had not met since her birth.

“Before I went to Thailand, I had been living with my wife in Pursat,” Anan told Good Times 2 in a recent interview in Phnom Penh. “When Sokun told me she became pregnant, I decided to head for the Cambodia-Thai border to work for two months to get money for the childbirth.”

“It was at the border that I was deceived by a motor taxi driver, who told me I could earn 5,000 baht per month simply by drying fish in Thailand,” Anan says.

“He sold me to a middleman, who brought me to the boat.”

There was not a single day on the trawler that Anan was not thinking about leaving. When he lost hope that the captain would release him, Anan began scheming to escape. One day, he saw the chance when the captain docked the boat at a Malaysian port to pay a fishing tax.

In the dead of the night, Anan, along with a Thai slave known as Chana, snuck out on deck and leapt into the sea and swam towards land, using a couple of fish sauce containers as their float. When he reached land, Anan’s hard life as a slave on a fishing boat seemed to be finally over.

But, that was not the end of his bad luck. Several police officers, from whom Anan asked for help, were corrupt and sold the two of them again to work in an oil palm plantation belonging to a rich man called Din. Anan called Din “crazy boss” because he was always in his underwear and wearing a scarf. Although life was a lot easier compared to that on the trawler, all Anan wanted was to become a free man again.

“At the plantation, I met Theara, another Khmer guy who was also sold into slavery,” Anan says. “I bought a mobile phone from the money I made from doing tattoos for the paid workers, and we called Theara’s mom. We told her everything, and she promised to help us.”

Four months later, a strange twist allowed Anan and Theara to leave the plantation. Both were injured in a fight which broke out during a party between Thai and Burmese workers and sent to hospital. After recovery, they were hauled to court and sentenced to three months in prison, for being illegal migrants. Yet, they were actually locked up for eight months, during which he witnessed “yo-yo justice” and inhumane treatment of prisoners in Malaysia.

After years of suffering, on May 15, 2010, Anan finally returned to his country with assistance from Licadho, a human rights NGO, and the Cambodian Embassy in Malaysia. When he went back to his home in Pursat, Sokun, his wife, was so furious with him, she did not accept him at first because she thought Anan had deserted her.

“I had to give birth to our daughter alone, without any money after he left, and I was working so hard to raise her alone, growing and selling morning glory (a flower),” Sokun, 36 says, almost bursting into tears.

“However, an official from Licadho later called me and told me everything. I thought my husband was lying, but when I knew the truth, I really pitied him. Our daughter was so scared of her own father, whom she had never seen and did not talk to him for a year.”

Anan restarted his life by becoming a rice farmer. He also resumed his career as a self-taught painter. After a while, Man Fred Hornung, a legal consultant at Licadho and the man who play a major role in Anan’s repatriation, contacted Anan and asked whether he would like to “draw your story”. Anan said yes, and that was the beginning of The Dead Eye and the Deep Blue Sea, a graphic memoir published in 2008 by the New York-based Seven Stories Press.

“Although years have passed now, these hellish memories are still torturing me,” Anan says. “So I want to protect others from suffering like me; that’s why I agreed to work on this book.”

According to a 2010 UNIAP Human Trafficking Sentinel Surveillance, one in five Cambodians deported from Thailand in 2009 were trafficked. In 2018, International Labour Organisation reported that Cambodian and Myanmar men who work on fishing boats in Thailand have been suffering from underpayment and bitter working conditions.

At the opening of an exhibition last week at Java Café and Gallery in which the detailed and compelling drawings of Prum Vannak Anan are on display until October this year, Jocelyn Pederick, an Australian filmmaker and the co-author of The Dead Eye and the Deep Blue Sea says Anan’s works vividly depict the darkest time of his life.

“They show how vulnerable people are to the world of slavery,” she says. “But they also show the strength and resilience of a man for his loved ones. Vannak (Anan) was so courageous to share his story so that it would not happen to anyone else.”

In 2012, Anan received a Human Rights Defender Award, presented to him directly by then-US Secretary of State Hillary Clinton. He says he was happy with the honour but hoped he could do more to help all slaves in the world.

“I want to open everyone’s eyes to slavery, which should not be in existence in this modern world,” Anan says, clutching his fists.

“Freedom is what we were born with; no one has the right to take it away.”