Prime Minister Hun Sen has renewed accusations of double standards by the European Union over the possible suspension of the Kingdom’s Everything-but-arms trade status during his visit to Geneva.

Mr Hun Sen is attending a three-day meeting on Aid for Trade Global Review in Switzerland and will return to the Kingdom today.

Kao Kim Hourn, Minister Attached to the Prime Minister, yesterday said Mr Hun Sen made the criticism during a bilateral sideline meeting with World Trade Organisation director-general Roberto Azevedo on Wednesday, where the topic of EBA was discussed.

“During the meeting with [Mr Azevedo] Samdech Prime Minsiter raised about the double standards in the European Union framework, especially in the process of suspending the Kingdom’s EBA trade status,” Mr Kim Hourn said. “He emphasised to the WTO director-general that ‘with the EBA, Cambodia still will not become a rich country, if we lose the EBA, Cambodia will survive’.”

He said that Mr Hun Sen noted that the government is undergoing economic reforms in order to prepare for impending challenges.

“He said Cambodia is pushing for internal economic and trade reforms, he said Cambodia will continue to strengthen its capacity to expand its market,” Mr Kim Hourn said, quoting Mr Hun Sen. “He said the WTO is still a good partner for Cambodia.”

“He said Cambodia will conduct long term economic reforms because Cambodia has a specific target to become a developed country in the future,” he added.

In February, the European Union started a six-month process of intense monitoring and engagement that could lead to the temporary suspension of Cambodia’s preferential access to the bloc’s market under the EBA trade scheme. 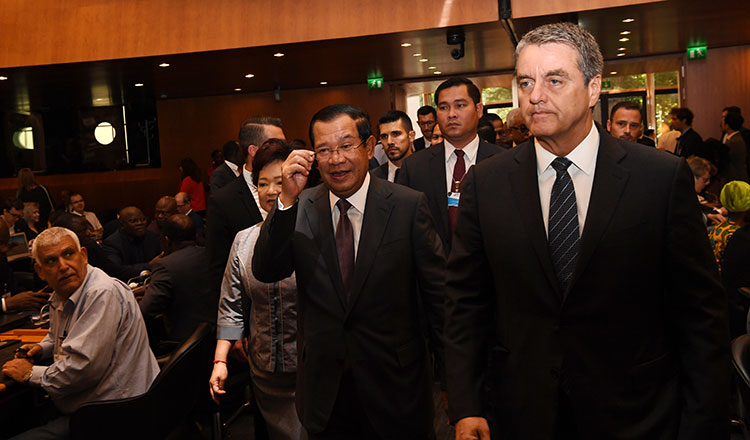 An EU delegation comprised of members of the European Commission and the European External Action Service visited the Kingdom last month, as part of the review.

“The EU’s aim is to address the human rights and labour rights concerns. The EU is committed to work with the Cambodian authorities to achieve this,” it said. “Cambodia must show real, credible improvement on issues of concern in order to avoid the withdrawal of EBA preferences.”

According to Mr Kim Hourn, Mr Azevedo congratulated Cambodia on its annual growth of about seven percent in the last two decades.

“[Mr Azevedo] expressed gratitude for the Prime Minister’s opinion, saying that his speech was a good sign for Cambodia, especially on economic reforms,” he said, noting that Mr Azevedo wants WTO partnership with Cambodia in the sectors of e-commerce.

“He said he wants to see support from Cambodia over WTO reforms,” he said.

In response, Mr Hun Sen said: “Even though the Cambodian economy is small, he wants Cambodia to participate with WTO because it’s important,” according to Mr Kim Hourn.

After the meeting, Mr Azevedo wrote on Twitter that WTO will support the Kingdom’s economic development.

“Pleased to welcome the Prime Minister of Cambodia to the WTO and to the Global Review of #Aid4Trade,” his tweet said. “We will continue to support Cambodia’s development through trade as an important Least Developed Countries and as a supporter of the global trading system.”