From ICT sector professionals to the general Cambodian public, it has been no secret that the tech sector in Cambodia has been booming in recent years, especially in the capital of Phnom Penh. With its place in the heart of Southeast Asia, fast internet connectivity and a young, digitally savvy population, Cambodia is poised for rapid growth in the digital economy.

What makes Cambodia attractive as a growth hub for digital economy business? Three main factors stand out, according to industry professionals of the ICT committee of the American Chamber of Commerce in Cambodia.

The first is the young population, the most youthful in South-East Asia, with half of people below the age of 25. Many are digitally savvy, having grown up with smartphones and access to social media, with over 7 million Facebook users out of the 16 million total population according to research by the Asia Foundation, with an estimated 54% internet penetration.

The second, related, reason is the relatively widespread and affordable availability of mobile broadband internet. While poor road conditions and urban traffic jams continue to plague the country like many South-East Asian capitals, fast 4.5G and soon 5G connections from Cellcard and Smart Axiata are available at much lower prices than western countries. On top of this, fixed broadband companies like Ezecom and SINET are providing affordable broadband, data centers, and more.

Thirdly, the open business environment of the Cambodian government, including 100% ownership of companies by foreign investors has significantly boosted knowledge transfers between US and Cambodian firms.

There is a tremendous energy and sense of opportunity around the digital and technology sectors,” said Chris McCarthy, CEO of MangoTango Asia, a digital media services company in Phnom Penh that serves clients around the world. “It’s like being in Silicon Valley in 1997, or Eastern Europe in 1991, as if we’re at the start of something big — and like those times and places, there’s a real first-mover advantage for those who are here now.”

Andries De Vos, serial entrepreneur with Silicon Valley experience and founder of Slash.co, which has software development activities in Cambodia, agrees. “An awakening has been happening recently, through a combination of government interest, large companies like Smart Axiata, Wing, and ABA and the first local digital role models pushing for more ambition and innovation. The last 12-18 months has seen a huge increase in ecosystem development, support and opportunities for budding entrepreneurs and tech enthusiasts to take risks and try to solve local problems or copy international models and localize them in Cambodia.

US companies are among such role models, especially big five technology companies; Google, Amazon, Facebook, Apple, and Microsoft (GAFAM). Apple’s iPhone is arguably the most aspirational mobile devices for many young Cambodians, and Facebook, Instagram and YouTube are analogous with the internet; with celebrities being created almost overnight on these platforms. Netflix has also launched in Cambodia as part of its regional expansion in 2016, bringing staples of American entertainment such as Game of Thrones and House of Cards to Cambodian audiences.

The Cambodian homegrown tech scene has also blossomed in recent years, due to a combination of government support and knowledge exchange with serial entrepreneurs with Silicon Valley experience, which has created a vibrant startup ecosystem.

According to a recent study by Raintree, a shared office space and tech ecosystem builder, over 23 co-working and innovative spaces have opened since 2011, with many more in the pipeline. Cambodian startups also continue to win regional and global prizes, benefiting from local business plan competitions such as BarCamp, Seedstars, accelerator programs such as SmartStart, SHE Incubator, and co-working spaces like ImpactHub and SmallWorld which create important community connections and mentoring for growing tech companies. 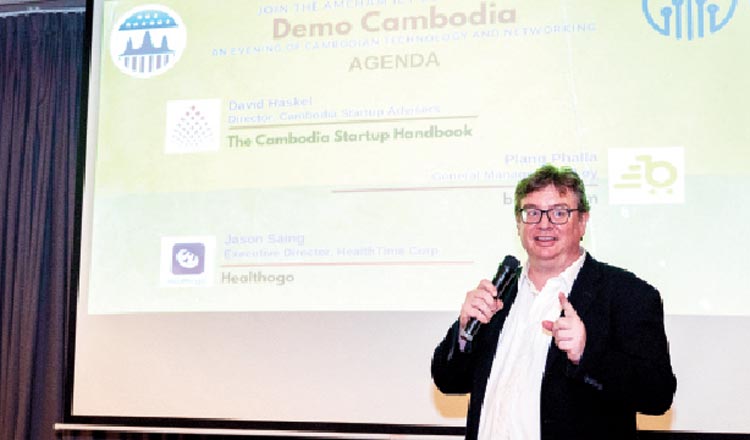 E-commerce and fintech are definite growth verticals within the ICT sector, according to Chanda Pen, CEO of payments providers BongLoy and co-chair of the American Chamber of Commerce ICT Committee, himself educated at Columbia University in the US. “The big players have been slow to arrive in Cambodia, which has created a space for local innovation. The sector can leapfrog over the current payments system in Cambodia, linking it to regional and global ecommerce opportunities”.

Early stage funding remains one of the main challenges for technology entrepreneurs, however. According to a regional study of Mekong countries by Emerging Markets Consulting (EMC), venture capital investment in early stage tech startups still lags behind Vietnam, as well as Thailand and other larger regional economies.

According to Matt van Roosmalen, Country Manager of EMC, currently most venture capital still goes through Singapore, Japan, or other neighboring markets. Entrepreneurs must be creative to find funding, and secure partnerships to access international markets. Promisingly there is a recent increase in VC activity, such as Ooctane (WorldBridge), SADIF (Smart Axiata), and corporate venturing (e.g. Wing, Forte). Some of the family offices are also taking a more active interest in deals, though usually they keep them discreet.

These technological developments also need to spill over to the industrial sector, says Matt van Roosmalen, as Cambodia aims to diversify its industry and export basket in line with global trends in digital economy and the fourth industrial revolution. Education here is absolutely key, and American companies offer excellent role models in fields like artificial intelligence, robotics, and digital education.

Andries De Vos agrees; “there are still a lot of basic gaps in education and talent though to support the narrative of Digital Cambodia and the ambition of entrepreneurs and tech companies. Coding standards are still subpar to developers in the region, such as Thailand, Vietnam or Indonesia. Salary increases often outpace skill development.”

However here there is also hope. Several innovative new programs are training the next generation of developers and engineers. Institutions have emerged with international instructors, such as the Liger Leadership Academy, which was founded as an American non-profit. Another example for younger children with US backing is the “Sisters of Code” program, supported by USAID, which encourages primary school girls to develop coding skills.

The Cambodian government is also introducing new programs oriented towards technology. The Ministry of Education, in response to the growth of the economy and society, has developed an ICT Education strategy which it is integrating into the national curriculum for students from Grade 4 to Grade 12. The “new generation school” initiative is being piloted at Preah Sisowath high school), supported by NIPTIC. The American Chamber of Commerce in Cambodia’s ICT committee aims to support all these initiatives, supporting American companies, Cambodian entrepreneurs, and the Cambodian government in elevating the Kingdom’s ICT sector. To this end, it brings together local and international firms with an interest in technology, coordinate events and facilitate this crucial exchange of ideas.

The committee organizes regular quarterly Demo Days, for new startups to showcase their ideas and prototypes, and has previously supported the Top 100 Startup Contest, together with Smart Axiata, the Ministry of Posts and Telecommunications, and e27; an ASEAN startup media platform. We aim to expand our range of events in the future, and everyone interested in the Cambodia ICT sector is welcome to participate by contacting AmCham directly.