Home - Defence Ministry rejects US concerns regarding Ream Naval Base

Defence Ministry rejects US concerns regarding Ream Naval Base

Defence Ministry officials yesterday rejected speculation made by United States officials regarding a Chinese military presence at the Ream Naval Base in Preah Sihanouk province.

According to a report by Reuters, Joseph Felter, US deputy assistant secretary of defence for South and Southeast Asia, sent a letter to Defence Minister General Tea Banh asking to elaborate why it declined help to repair a training facility and boat depot at the base.

“The notification letter of 6 June 2019 has been seen throughout the US government and is fuelling speculation that this sudden change of policy could indicate larger plans for changes at Ream Naval Base, particularly ones that involve hosting Chinese military assets,” Mr Felter’s letter said, as quoted by Reuters.

In a US embassy statement yesterday, spokeswoman Emily Zeeberg said the concern stemmed from rising Chinese influence in the Kingdom’s economy and political sectors.

“Recent developments have fuelled speculation about Cambodia’s future plans for Ream Naval Base, including the possible hosting of Chinese military facilities given the high level of Chinese economic and political influence in Cambodia, this is a real concern,” Ms Zeeberg said.

“Any steps that weaken Cambodia’s independence or open the door to a foreign military presence in Cambodia would be of serious concern to the United States and could threaten the credibility and centrality of Asean,” she added. “We urge the Cambodian leadership to maintain its constitutional commitment to an independent foreign policy and actively protect Cambodia’s independence for future generations.” 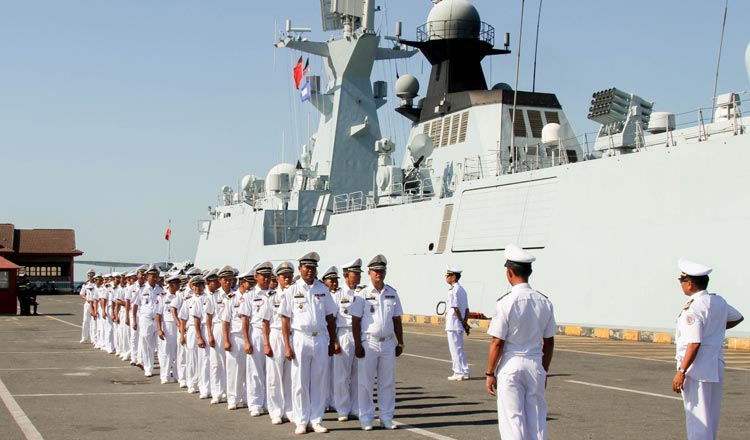 Rear Admiral Mey Dina, spokesman for the Ream Naval Base, yesterday denied a Chinese military presence at the naval base.

“Ream Naval Base wishes to reject the statement made by the US embassy that speculated about the future of Chinese military facilities in our naval base,” he said. “We have no Chinese military base here.”

“The Cambodian constitution does not allow foreign troops to erect a military base in the Kingdom,” he added. “Ream Naval Base is upholding our sovereignty as a priority, and we will continue to strengthen international cooperation with other navies from around the world.”

Defence Ministry spokesman General Chhum Sucheat yesterday said that in 2007, the US helped the ministry’s maritime security secretariat to build a warehouse and dormitories at the base.

“I heard that the media reported that our ministry rejected the request from the US to repair those buildings,” Gen Sucheat said, noting that the ministry never requested the US to help. “I think this information is fake news.”

“We had no intention to reject their assistance, we welcome everyone,” he added. “The news was exaggerated and it slandered us.”

Calls for more action to protect children from online threats