Home - Children of the Night

As the night falls, many children have now started conversing with their parents, who otherwise force them to go to bed early so that they will not be late for school in the morning. In the city of Phnom Penh, however, many children are not that fortunate. For them, their days started late at night because they have to find money by begging or selling various things to the people who love going out and enjoy all sort of night time activities. These children go out and engage with all kinds of people without knowing what would happen to them. Taing Rinith documents the risky life of nocturnal children in the city’s nightlife districts.

It is a Monday night at Phnom Penh’s Pub Street, a nightlife district near the riverside which only comes to life after sunset. The clock strikes 11, just one hour until the dawn of a new day, but the night owls in the areas, especially the men who are out for fun and excitement, do not show any sign of sleepiness. Sitting in bars and nightclubs where the colourful lights that define the area are emitted, the female workers, many of whom are scantily dressed, are loudly calling in those walking past their workplaces, address them as “Honey” or “Darling”.

Among those men and women is 12-year-old Sok Lin, who is wandering from one place to another carrying a tray filled with roses and garlands. In a bar, where several women are dancing sexily on the counter, a Chinese male customer bought a rose from her to give to a female worker who is accompanying him.

Lin is a fifth grader during the day, but after her school hours, she has to do her part to help her parents support the family. Every evening, after having her dinner at 7 pm, her father brings Lin from their house, located in a small village in Kandal about 10 kilometres from the centre of Phnom Penh, to the nightlife area to sell flowers. He waits about 1 km away to take her home at 1:00 in the morning.

Some of Lin’s friends, who also sell flowers or other stuff to the night owls, even put on makeup and wear short skirts in the area although most of them are still under 18. A 15-year-old girl, who calls herself Srey Oun, says some adults force her to eat or drink with them or they will not buy from her. Fortunately, nothing bad has happened to her, yet.

It is not safe for the little girls. Lin says there were so many times that she got beaten up by beggars or drug addicts, who want her money, not to mention that being at Riverside’s Pub Street during that time also puts her at great risk of sexual abuse. But, Lin wants to help her family and herself as this is the only way for her to keep studying to fulfil her dream of becoming a nurse.

Two brothers Penh Vanna and Penh Ratana, aged 13 and 11, are also helping to feed their family by selling string bracelets made by their mother, who two years ago failed at her culinary business, at the Riverside as well. Their father, a motorcycle taxi rider, will come and get them at midnight. Vanna, the elder brother, says he is a “brave man” and is not afraid of anything. Ratana, however, is sometimes frightened by strangers.

“My friends told me that some Barang (Western foreigner) rape boys,” Ratana says. “I don’t know how they do that, but I try not to be with them for long.”

Another two young brothers in the area, Phoem Neun and Phoem Tak, are less fortunate. They have to beg people for money to feed themselves and their sick mother. Three of them live under a tree near a large building.

“Sometimes, we don’t have anything to eat because no one gave us money,” Neun, 13, says. “Sometimes, they do not give us money but things to eat.”

In Toul Kok, on the other side of the city, a man dropped a boy in front of a night restaurant with a tray of sour food, such as green mangos and makak (Otaheite apples).

He refused to answer any question and simply shouted angrily, “Children are supposed to help their parents What’s wrong?” and left.

Cambodian children who have to come out at night to earn money, no matter what they do, are facing great risks of being abused, says Hoy Leanghong, the Director of Community Relations of Cambodia Children’s Fund.

“Children who work at night are prone to violence, sexual, substance abuses, kidnap, traffic accidents and so on,” Leanghong says. “There are all kinds of people going out at night, and of course, no one can know whether they are good or bad.”

“And the night children are interacting with all of those people. Anything could happen.”

According to his team’s research in the past few years, while some children are willing to go out at night to earn money to support their study or family, many are forced by their parents or other people who exploit them.

“Children could be very easily controlled through using violence, drugs, food or money,” Leanghong adds. “Most of them do not know how to seek help from adults. Some people however, are likely to buy from them because they look pitiable.”

The issue of violence against children and child abuse is critical in Cambodia.

On June 10, the Child Protection Unit announced it recorded more than 1,400 crimes against children. A few days later, Action Pour Les Enfants, an anti-paedophile NGO, announced that it cooperated with authorities to crack down on 18 child sex cases involving more than 10 foreigners last year. In the same week, Siem Reap Provincial Court charged Peth Mao, a 23-year-old woman who allegedly recruited five underage girls to beg money from foreign nationals or have sex with them in Siem Riep city.

In fact, it is safe to say that there is not a single day, on which there is no media coverage on sexual abuse against the minors in Cambodia.

On this month’s International Children’s Day, Prime Minister Hun Sen called on local authorities, parents and the public to join hands in protecting children in order to eliminate all forms of child labour.

“All stations of state and private radios, televisions, and other social media, please continue to broadcast the need for children protection from violence and child labour, especially strengthening the quality of educational programs for children in order to prevent children from becoming victims”, the premier said.

However, Leanghong, CCF’s Director of Community Relations, says spreading the message alone is not enough. 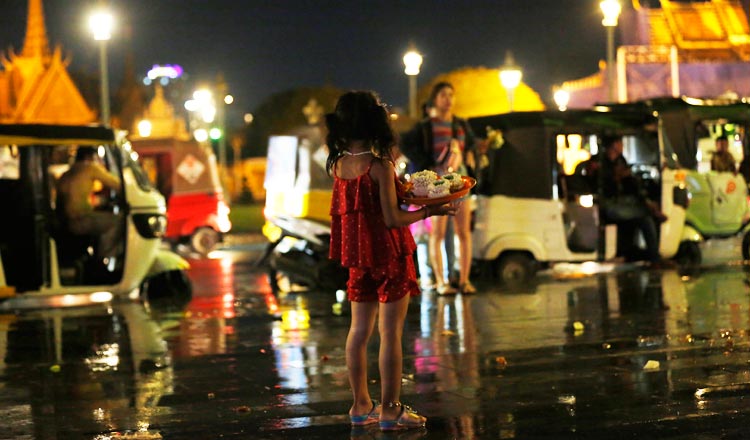 “Much effort is needed to improve the local families’ financial situation so that they do not need to use their children,” he says. “But, people are greedy – not to mention the evil ones who exploit children who are not theirs.”

“The best solution, I believe, is to stop buying from them or give them money. When they can no longer make money for the adults who control them, they will no longer be used.”

However, such advice could be considered “heartless” by the charitable people, such as Emilly Rose, an American tourist who come to visit Cambodia.

“These children are hungry or their families need help,” Emily says, after giving some money to a child beggar who had been asking her for it persistently. “My friends here always ask me not to buy from or give them money, but it is not easy seeing their sad faces.”