It might not be surprising that people in Cambodia, especially in Phnom Penh, are in favour of consuming plastic in their daily activities – at the market, school, restaurant and others. This heavy plastic consumption has become a concern to a group consisting of eight grade 6 students at Canadian International School of Phnom Penh.

Instead of complaining about the problem, these kids have gathered and initiated a project called ‘Green Week’, hoping that it could bring awareness of plastic consumption to other students in the school. Collaborating with local non-profit organisation (NGO) Empowering Youth in Cambodia, their activities began with conducting a survey on 68 students during their lunch time to find out more about each of their interests and how they can make and inspire others for change. The group also shot a video that explains about the inappropriate behavior of throwing plastic in the school campus and the consequences of pollution.

According to their research, they said: “We have found that 10 million plastic bags are used every day in just Phnom Penh. But there are still ways to solve this by recycling, planting more trees and spreading the word through many ways about how people can become a part of the solution and role model s to their family and community.”

Throughout their project, in the reflection session, all these students confessed that they did not only absorb knowledge about environmental issues but also how to build their confidence and polish their public-speaking skills.

Joseph Hoang, Grade 6 teacher of Canadian International School, who witnessed the execution of the project said he was impressed by his students’ presentation and their concern on inappropriate behavior such as littering. 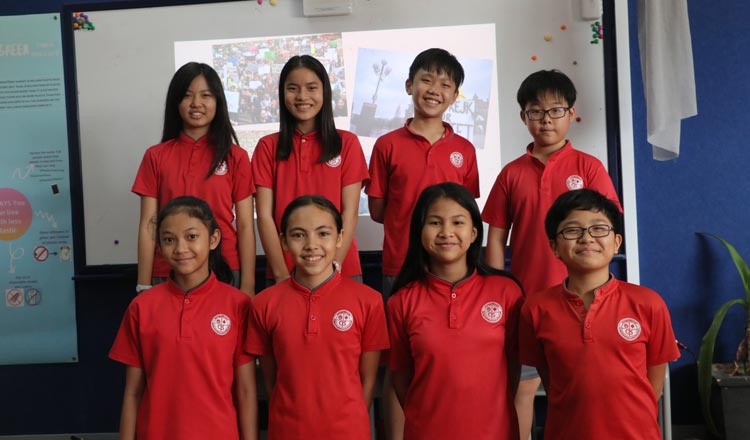 Regardless of their young age, Joseph said that all the students were really connected to collaboratively work hard together even though the activity was not large-scaled in nature. He said: “Regardless of nationalities, gender, and background, they have shown that they can come together and create better change for the world.”

As the school encourages similar projects, Mr Joseph hopes to see more interest among students so they will also follow the group’s footsteps and work hard towards achieving their target.

However, seeing that the students are still really young, as a teacher Joseph admitted to facing some challenges as he had to go the extra mile to teach students on how to conduct credential research. This is very important especially since there are a lot of fake news looming online.

“Although they are still a kid, it is still important for students to understand how fake news can alter what they think. So far, some of the facts they have found, I have to double check it. Aside from that, I have to inspire them to initiate changes from the littlest act. Generally, Cambodian kids have a perspective that people cannot change their habit on a whim, so this might get a little discouraging. My role is to encourage them to continuously work on their vision.”

4 tech websites you need to know

Dry run for students to indulge in diplomacy