No launch date has been decided on a passenger train service between Phnom Penh and Poipet city, which sits near the Thai border province of Sa Kaeo, as the government continue talks with concession-granted company Royal Railway on the service in the Cambodian side that would facilitate cross-border connection of railway services between the Kingdom and Thailand.

Vasim Sorya, Ministry of Public Works and Transports spokesman, said train services between Phnom Penh and Poipet city has not yet started operating, however, he noted that the government has been pushing for the launch of the passengers train service with the train company.

“Now, we are still in negotiation talks,” Mr Sorya said. “The ministry has established a committee to check the concessional contract because the Royal Railway already has a contract [to operate freight services], and we are preparing a new contract [for passenger services], so it’s not yet operating.”

In the entity contract, the Royal Railway operates only freight train services and it needs to negotiate for passenger train service, according to Mr Sorya.

Passenger train services between Phnom Penh and Poipet city in Banteay Meanchey province is necessary to connect the Cambodian capital railway with Bangkok, as the neighbouring country has announced that it is set to launch its respective half of the route next month.

There will be four trips a day, two in each direction, the report added.

Cambodia and Thailand signed an agreement on joint operations of a train service linking the two countries in April, when the rail lines of the two countries reconnected after 45 years. The northern railway line in Cambodia was completed in last August, allowing train services to operate on its respective route.

Um Reatry, provincial governor of Banteay Meanchey, said that preparations of facilities for the passenger terminal and cargo platforms for the train services have been constructed.

“Although train services between Cambodia and Thailand have not yet started, but we hope the cross border trade activities of both passengers and goods will increase,” Mr Reatry said.

“It should not be a long time for cross border train service to start because officials from the ministry [of transport] and from the company have worked on operating the train service that should be coming soon,” Mr Reatry said. 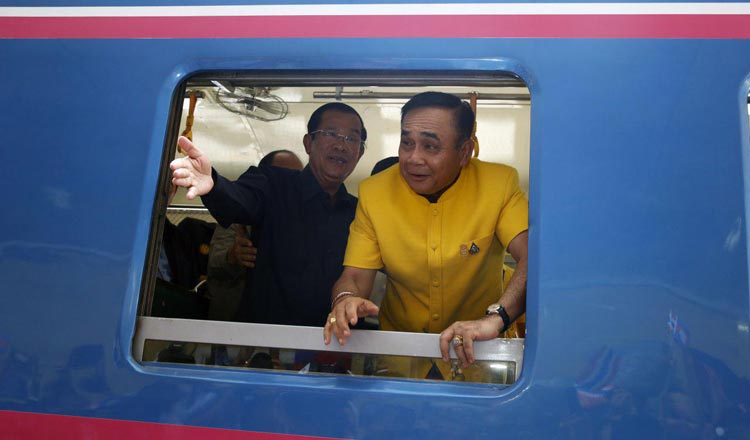 “The cross border connection of train service will benefit both passengers and goods because the cost of transport via train is lower than transport via road,” Mr Chanty said.

However, Mr Chanthy said due to poor condition of rail tracks, the transport via train will face challenges including speed of train.

Acting governor of the State Railway of Thailand Worawut Mala predicted the new service between Bangkok and Ban Klong Luk border station will facilitate the travels of Thai and foreign tourists wanting to cross the border.