In February, the Education and Labour Ministries worked with Unesco to launch the Basic Education Equivalency Programme, or BEEP, which aims to provide alternative education to people who want a second chance at finishing lower secondary school. Through the programme, successful students earn a diploma, making it possible for them to obtain decent employment. Several people who are either enrolled in the programme, or thinking about joining, spoke to Khmer Times about their journey.

Prum Chanlang dropped out of the ninth grade when she was 15 because she thought she had no chance of graduating.

Ms Chanlang says she came all the way from her home province of Banteay Meanchey in order to register to enrol at BEEP’s branch at the National Institute of Entrepreneurship and Innovation in Phnom Penh.

She says she had no choice but to drop out of school during her teenage years because her family was poor. In order to help her family, she moved to the capital to work as a translator.

Ms Chanlang says despite her linguistic prowess in being able to speak English, Thai and Chinese, she lacks certification.

“In this society, if our skills are not certified, it is difficult to compete in the labour market,” she says. 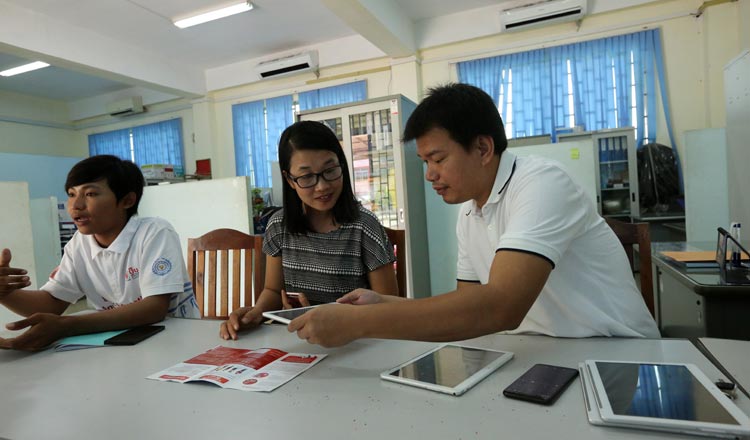 Ms Chanlang says despair turned hope when she saw a promotion for BEEP on social media.

“I thought I had no chance because of my age, but then I heard news that a 90-year-old woman was able to graduate,” she says. “I was surprised, but the news encouraged me to continue to study.”

Ms Chanlang says with BEEP, learning is done online and that certification would be recognised by the Education Ministry and Labour Ministry.

“I can work to find income as usual then I can study at home at night before I sleep,” she says. “It’s different studying online because we learn alone – there are no online peers and no online teachers, but I got used to it.”

Ms Chalang notes that when she has a question or is in need for clarification, she can ask a teacher facilitated by BEEP.

“It is a good programme because it gives a chance to out-of-school people to learn and get certified,” she says. “I hope that my dream will come true and hope that other dropouts will register and join in order to study again and have a brighter future.”

Peang Hongkri, 17, hails from Kampong Thom province. After dropping out of the ninth grade, he left his home province to work as a security guard in Phnom Penh.

Mr Hongkri says he wanted to obtain vocational skills, but he did not have a diploma. He says that one day, his brother told him about BEEP and told him to register online.

“I could not use a computer, or other electronics like tablets, but my teacher helped me first and explained to me how a computer is used. I wanted to complete it,” Mr Hongkri says.

Mr Hongkri says he used to lurk on social media or listen to music before falling asleep. However, these days he spends his down time with BEEP.

“I learned Khmer, foreign language and mathematics from this programme,” he says. “At first it was difficult because I couldn’t use a computer, but when I tried hard, I was able to learn.”

Mr Hongkri says his dream now is to become an electrical engineer.

“I want to gain vocational skills so I can find a job – I don’t want to be a security guard forever,” he says. “I must struggle to study and try to earn money to support my family.”

Suong Chankroesna, a teacher who works with BEEP, says access to it is free and learning is done through electronic courses.

Mr Chankroesna says students can take any courses they please and that learning is done at their own pace. He says that upon completion of the programme, students are handed certificates and are recognised as ninth grade graduates.

Mr Chankroesna notes that upon completion, students can even seek higher secondary and vocational education.

The programme has 11 subjects in its curriculum, namely Khmer, math, English, information technology, tourism and entrepreneurship, among others. BEEP has five branches in Phnom Penh and five branches in the province of Siem Reap.

Kimlay Leav, a programme officer with Unesco, says it is aiming to tackle challenges posed by high dropout rates in secondary education in Cambodia.

Mr Leav says Unesco has closely worked with the two ministries to design BEEP. He says that since February, about 990 people have registered online from different parts of Cambodia, noting that 125 students are currently enrolled in BEEP.

“The programme is very beneficial to high school drop outs so they can get an education online,” Mr Leav says. “With the skills obtained […], they can find better jobs.”

Mr Leav says BEEP has not only gained the interest of people in the Kingdom, but also people of the Kingdom who live and work in South Korea.

“Our Cambodian workers who are working abroad are also interested in the programme,” he says. “There are five workers in Korea who are enrolled. Others have been registering in order to learn.”

When BEEP launched in February, Education Minister Hang Chuon Naron hailed it as an opportunity for those who wished to finish ninth grade. Mr Chuon Naron highlighted the benefits offered upon completing the programme.

“Youths like to be online, so learning online will benefit your knowledge,” he says. “They can learn, get a diploma and bring their newly-acquired skills to their next profession.”

Pich Sophorn, a secretary of state with the Labour Ministry, says modern technology is beginning to be applied in business operations through automation.

He says in order to anticipate the replacement of human labour with machines, students must learn important skills.

“Machine technicians are in high demand,” Mr Sophorn says. “The government urges youths to study [engineering] to meet that demand.”

“Such a training programme is important in helping dropouts improve their lives,” he adds.

On Thursday, Prime Minister Hun Sen said all ministries, institutions and teachers must continue to encourage dropouts to learn vocational skills so they will be able to find jobs and earn a decent living.

In a statement to mark the second National Day of Technical Vocational Education and Training, Mr Hun Sen said the government is responding to the growing need for skilled workers in the age of information.

“The government has also provided scholarships to youths who drop out of school, the poor, women, disabled people, orphans, indigenous people, laid-off workers and the vulnerable, so that they have the opportunity to get skills training,” he said.