Home - Potential US ambassador would champion rights if appointed

Potential US ambassador would champion rights if appointed

The US’ deputy assistant secretary for southeast Asia Patrick Murphy would promote democracy and human rights as his main agenda if he is appointed as the new ambassador to Cambodia, said a former opposition party official.

In a statement issued by the White House in August, US President Donald Trump initially nominated Mr Murphy to replace outgoing Ambassador to Cambodia William Heidt. However, Mr Trump had to re-nominate Mr Murphy following last year’s US midterm election.

Meach Sovannara, the former opposition party official, said on Facebook on Sunday that Mr Murphy would champion issues of human rights and democracy in the Kingdom if he’s appointed as the new ambassador.

Mr Sovannara said Mr Murphy made the vow during a Senate confirmation hearing.

“I will work closely with the National Assembly to make progress on US interests in Cambodia, promote democracy, human rights and fundamental freedoms,” he said, quoting Mr Murphy.

Mr Sovannara said Mr Murphy’s appointment would be “a special gift” to Cambodia. 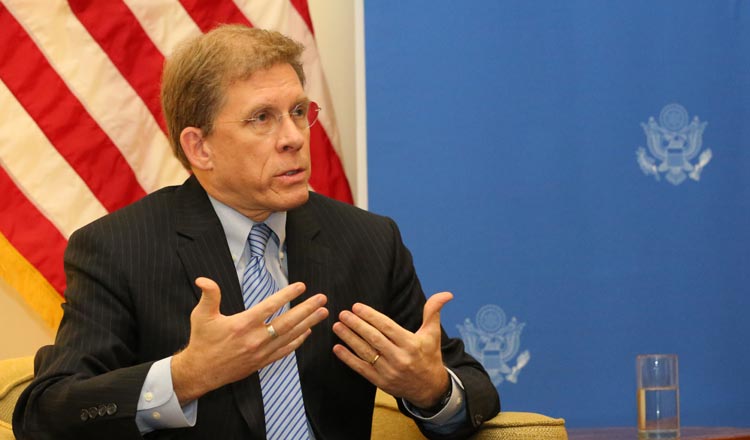 Mr Heidt was appointed ambassador in August 2015 by the US Senate and was sworn in on September 14, 2015. His term in Cambodia has ended. Mr Murphy was with the US Foreign Service for more than 25 years and served in numerous senior positions in the region.

Zwartjes Arend, US embassy spokesman, yesterday said in an email that Mr Trump had to re-nominate Mr Murphy on January 16 due to congressional rules. Mr Arend noted that Mr Murphy is now waiting for Senate approval.

“His nomination is awaiting full approval by the US Senate,” he said.

“Cambodia has shown its stance that no [foreign] citizen is an enemy of Cambodia,” Mr Siphan said. “Cambodia respects other countries and will not meddle in the internal affairs of other countries.”

Kin Phea, director-general of the International Relations Institute at the Royal Academy of Cambodia, yesterday said he is unsure if a new ambassador can mend US-Cambodia relations.

US-Cambodia relations began to sour when the US called on the government to reverse an anti-democratic crackdown on the now-dissolved CNRP.

The US then imposed visa restrictions on some Cambodian officials accused of violating human rights. The government hit back by rejecting deportees from the US.

In February, two US congressmen introduced the Cambodia Trade Act, a bill that asks Mr Trump’s administration to review Cambodia’s preferential trade treatment under the Generalised System of Preferences that the Kingdom receives from the US.

“I think it won’t get better […] unless the US government decides to change its stance towards Cambodia,” Mr Phea said.