Home - Melodies by the Mekong

Melodies by the Mekong

It was a significant Thursday night. An iconic Filipino choral group performed at Cambodia’s iconic Chaktomuk Theatre, symbolising the power of music in connecting two nations whose culture, history and language vary. Agnes Alpuerto and Som Kanika join the friendship concert by the Philippine Madrigal Singers in the Kingdom.

The Filipino language is very distinct from Khmer. As a matter of fact, the two languages do not follow the same alphabet. But where language stalls, music connects. This was proven true by the ‘Melodies by the Mekong: A Friendship Concert by the Philippine Madrigal Singers’ last week at the storied Chaktomuk Conference Hall in Phnom Penh.

Wearing colourful dresses and gray barongs, the members of the globally renowned choral group went into the center stage, settled in their seats, hummed in low voices before bursting into different but harmonious melodies of ‘Magdiwang, Magpuri’, one of the Philippines’ most notable religious and cultural songs.

Everyone knew how impressive the choral group is, having won several international competitions and being recognised by UNESCO as Artists for Peace. But the group’s performance was still very much surprisingly majestic.

‘Magdiwang, Magpuri’ was followed by equally grand renditions of ‘O Naranniag a Bulan’, ‘Pamugun’, ‘Bahay Kubo’, ‘Chichirichit’, ‘Mas Que Nada’, ‘La Mer’ and ‘Great God Almighty’ before exiting the stage for a quick break and to give way to a cultural dance performance by Filipino expats’ dance troupe.

And when the choral group got back on stage, they were more soulful than ever.

‘Phnom Penh’, a song written by King Father Norodom Sihanouk, was sung – signifying the very essence of the ‘friendship concert’. The group, despite probably not understanding every lyric, knew what the song meant for the people of Cambodia. And they took it by heart.

Their next pieces all reflected peace, belief and unity – from ‘You Raise Me Up’ to a medley of ‘Climb Every Mountain’, ‘Somewhere’ and ‘You’ll Never Walk Alone’.

‘Da Coconut Nut Nut’, a whimsical Filipino piece, drew loud laughters from everyone in the theatre, even from those who didn’t know its meaning. Because like music, laughter knows no language as well. 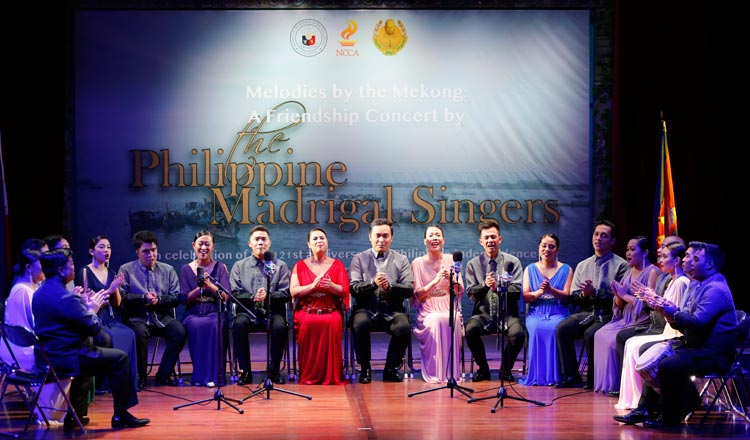 The rain was pouring hard that night outside Chaktomuk. But for those who braved the heavy downpour and strong winds just to witness the rare appearance of the Philippine Madrigal Singers in Cambodia, the group didn’t disappoint.

The choral group, founded in the Philippines in 1963 by a national artist for music, is one of the most awarded choral groups in the world. They hold the distinction as the first choir to win the prestigious European Grand Prix for Choral Singing twice (1997 and 2007). The group’s virtuosity across a vast repertoire range has made them a pioneering force in choral music and an inspirational role model for other choirs in different continents. And their visit to Cambodia may just motivate the Kingdom to create its own.

After Thursday’s magical concert, the group led a voice workshop with Filipino workers and families in Cambodia at the Philippine Embassy over the weekend, opening a rare opportunity for Filipinos to learn from the best.

The choir’s visit to the Kingdom of Cambodia was just one of the several activities set-up by the Embassy of the Republic of the Philippines in Cambodia to commemorate the celebration of the 121st anniversary of Philippine Independence on June 12.

The embassy celebrates Independence Day annually, in unity with the Filipinos in the Philippines and in other nations.

A friendship dinner as well as a flag raising ceremony was held this week, marking the importance of the hard-fought freedom from Spain.

“On this occasion, we honour our forefathers who fought and died for our freedom and independence. Their labours, their blood, their sacrifices and their hardships are the foundation of our nation. However, the freedom we gained more than 100 years ago can only be sustained by strengthening basic institutions – government, society and family. To do this, we must achieve better governance, build a moral society and responsible citizens, and help develop families with civic values,” noted Ms. Myca Magnolia M. Fischer, Chargé d’Affaires, a.i., during Wednesday’s flag raising ceremony, further encouraging Filipinos living and working the Kingdom of Cambodia to always uphold their identity and their values as modern Filipino heroes.