“It is important to understand that my self-appointed job is to promote Cambodia throughout the world in the best possible light,” says Doug Beattie, renowned Siem Reap photographer and owner-cum-publisher of Wild Cambodia Press.

“I first discovered Cambodia in March 2004,” he adds. “I spent five weeks on holiday above a bar on the beach at Sihanoukville.

“It was a great time, and from that point I spent a lot of time figuring out how best to assist Cambodia utilising the strengths that I had and still make a reasonable living.

“I figured the best way to help Cambodia was to promote it internationally, and the best way to do that was with my ability to create world class pictures and products and develop a sales and distribution system that would get them into people’s homes and businesses around the world.

“Early in 2009 I moved here full time – 15 years later I am still trying to work out how to make a reasonable living in Cambodia.”

Beattie’s Siem Reap-based Wild Cambodia Press, with offices in Phnom Penh, belts out a range of pictorial products such as post cards, fridge magnets and a book, ‘My Cambodia -The Photographers Cut,’ all displayed in smart racks in a range or tourism- related outlets throughout the Kingdom, all run by Beattie and a small staff.

His diverse Australian career has certainly helped him carve out a niche in Cambodia.

He spent 15 years of his career in the Sydney ad agency scene, before his love for scuba diving and skydiving took him to Cairns in north Queensland.

There he signed on as public affairs officer for the Cairns Port Authority, encompassing Cairns International Airport and Cairns Seaport, which is where he honed his tourism industry knowledge.

He then became a partner with Explorer Productions, producing tourism TV programmes about Australia, before starting his own tourism business Creative Safaris Australia, operating 4WD safaris in Northern Australia. “My customers were artists and photographers from around the globe,” he says. “That was a really great time. I spent five years travelling and camping in the bush and painting, photographing and cooking. Not to mention the great selection of Australian and New Zealand wines I carried with me.”

Finally Cambodia called and here he is.

Beattie himself is a contradictory character – he’s widely regarded as a commercial photographer coming from an ad industry background, unlike most of the Kingdom’s high profile foreign photographers who have a media news background.

And despite his business interest, Beattie regards himself as an artist, primarily as an exponent in fine art photography, and a dab hand at oil painting when he can find time.

“My big advantage is that I am essentially an artist, both commercially and in fine art,” he says.

But unlike most fine artists, he has never exhibited in a gallery.

“Each display stand in Cambodia is a small exhibition of my work,” he notes. “However, I have had offers to exhibit in Paris and just recently Brisbane. It is really a case of economics to see international exhibitions through from development to completion. The costs are high and I have no additional support.”

“Apart from the perspective and composition which are essential, I look for the scenes that would make great paintings,” he says, “Scenes that provide a great deal of life, depth, tone and atmosphere. My artistic skills are in tonalism.”

And he says those artistic skills are ultimately encapsulated in his favorite photo of King Norodom Sihanouk’s cremation at the Veal Mean cremation compound in Phnom Penh, when he captured the moment the cremation fire was lit.

“That was a moment in world history of unbelievable emotion,” he says, “Imprinted in my brain is the silence of the streets, empty of human population except those attending the cremation. The beautifully orchestrated lighting and pyrotechnics. The booming sounds of the 21-gun salute echoing and reverberating throughout the city.

“I took the picture on top of the Frangipani Hotel with the kind assistance of the Ministry of Information and the Cambodian Armed Forces.” 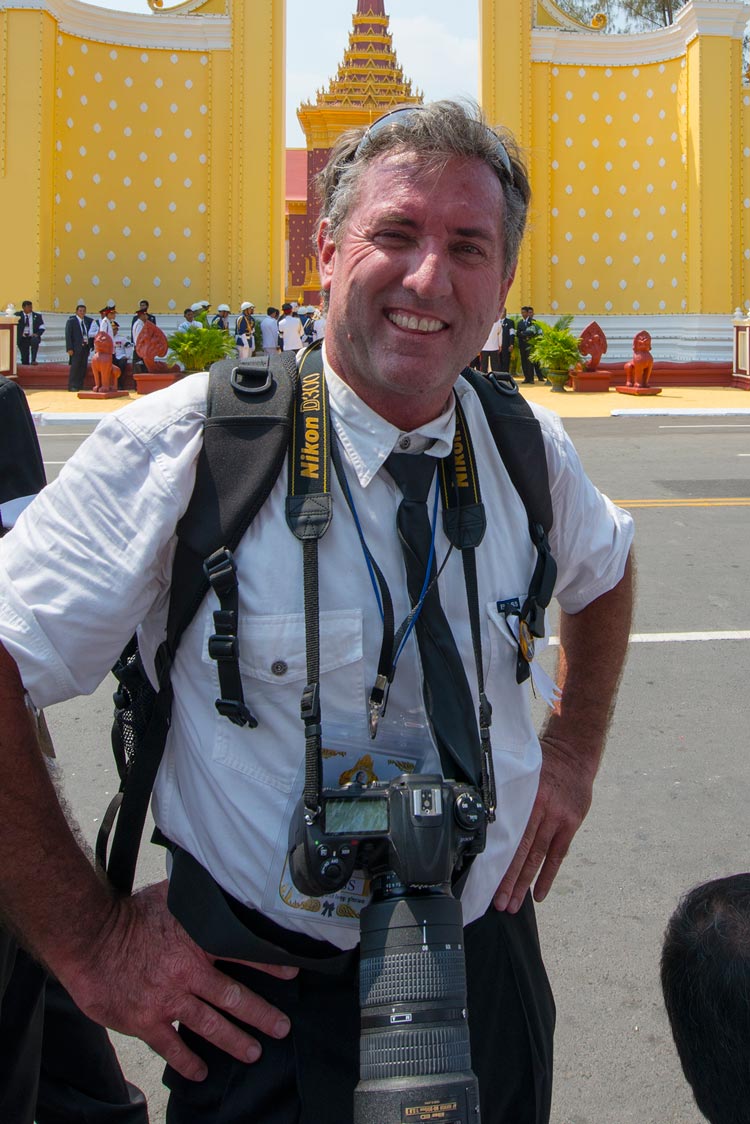 He says being able to position himself on the rooftop to get the iconic shot was a bit of an art in itself. At one point all media were cleared from the hotel rooftop by authorities, but he was determined to stay.

“I had a real purpose to fulfill,” he says, “I showed the RCAF Commander-in-charge my previous shots and explained to him my intentions. Under his guidance I was allowed back onto the roof by myself…but I had to keep my head down at certain times as there were military protection units positioned on rooftops around the city owing to the visiting Heads of State.

“At the time of the lighting of the flame only a handful of photographers and a television unit were allowed back on the roof.

“I love this picture not just because of the enormity of the occasion but also because of its spectacular symmetry and clarity.

“The scene was captured just after dusk which created a surreal lighting effect between setting sky and the illumination of the compound.

“I am proud to say that this is the only real production quality photograph of that moment in time that is in existence today. In the future, at the right time, it will find itself on display in Cambodia in all the right places.”

‘Godzilla: King of the Monsters’ delivers creatures and destruction galore

Captivated by a Father’s Courage