Shipments will be made to Myanmar, Laos, Vietnam, Malaysia, the Philippines, and Japan starting this month, Mr Chan said.

“There is big demand for the product in these countries,” he said.

“After distributing this organic fertilizer in the local market for 13 years, we will soon officially become the first local company to export the product abroad.”

The shipments will be made under the name Japanese Organic Fertilizer, a joint venture between Bayon Heritage and Japan’s Nangoku Agriculture Development. 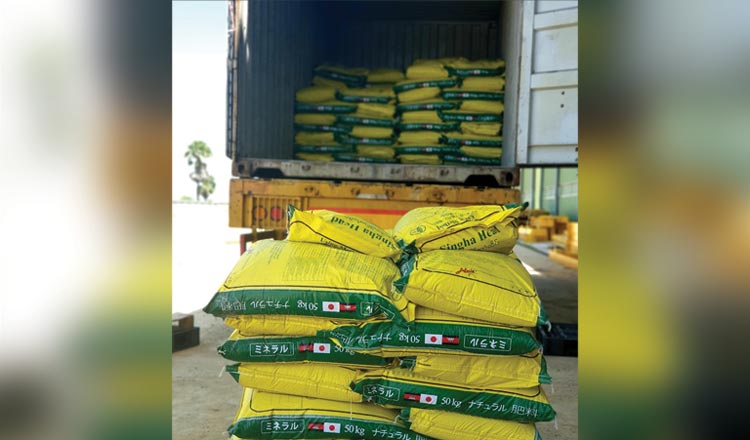 Japanese Organic Fertilizer was created in 2004 with the objective of importing and distributing organic fertilizers from Japan to help Cambodian farmers, Mr Chan noted, adding that the company built a factory in Cambodia to process fertilizers, with the raw material coming from Japan.

He said bigger shipments are likely to ensue in the near future if there is demand for the product.

Bayon Heritage is the first company in Cambodia to receive a licence to export fertilizers, according to Phum Ra, director of the department of agricultural legislation at the Ministry of Agriculture.

Mr Ra said there is great potential for investment in the fertilizer industry, with Cambodia boasting plenty of the raw materials needed to produce fertilizers, as well as a young and vast labour force.

“So far investment in fertilizer production has been limited because Cambodia’s export market is still small compared to that of Vietnam or Thailand,” Mr Ra said, adding that Cambodian fertilizers can compete in terms of quality with those from neighbouring countries.

“I think in the next five to ten years, Cambodia has the potential to significantly expand its production,” Mr Ra added

There are around 100 companies importing fertilizers in Cambodia. Last year, Cambodia imported one million tonnes of organic and chemical fertilizers from Vietnam, Thailand, and China, according to data from the Ministry of Agriculture.

CATA to work with French firm to attract more tourists