The paper we are using at present was invented in China during the Han Dynasty (206 BC–220 AD) by Cai Lun, a eunuch. But it was not widely used in Cambodia until about 150 years ago. So, what did our ancestors use to record their history and keep their knowledge for the next generations to know? They used sleuk rith, a form of palm-leaf manuscripts. Although such manuscripts could be kept for hundreds of years, there is currently a serious concern that most of them could be lost forever if not well preserved. Story by Taing Rinith. 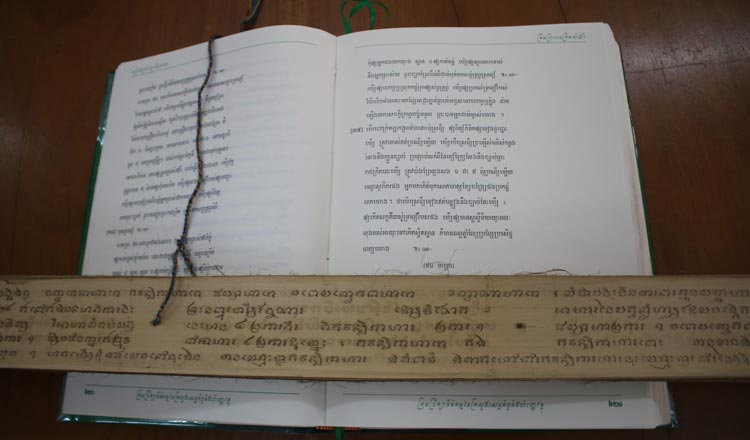 It was a night during the reign of King Aung Doung, who ruled Cambodia from 1840 to 1860. In a kodi or monk’s house in Wat Svay Chrum, a Buddhist monastery in Prey Veng, a young man, who wished to become a district judge, was studying a satra or text on the kingdom’s laws, etched on a sleuk rith manuscript, made from the leaves of a local thorny palm tree known as traing.

The young man studied so hard because he hoped that his teacher, who was a senior monk, would bring him to work for the chief of the district. The part he was reading under the light from a fish oil lamp was about the harsh punishments for robbery.

Back to the present day, the manuscript that the young man was reading is kept at Le Fonds pour l’Edition des Manuscrits du Cambodge (FEMC), a library in the compound on Phnom Penh Wat Ounalom Pagoda, where these forms of palm-leaf manuscripts from all over the country are preserved.

It was founded by The École française d’Extrême-Orient, which in 1990 “undertook the locating, physical restoration, microfilming, identification and inventory of the extant manuscripts”. But, it has been under the administration of the Ministry of Culture and Fine Arts since EFEO ran out of funding in 2012.

The small FEMC’s office is filled with thousands of sleuk rith manuscripts, which Leng Kok An, the Director of sleuk rith preservation, along with a colleague have collected from pagodas and people’s houses all over the country for almost 30 years.

“Various texts are etched on these manuscripts, from folktales to Buddhist sutras,” Kok An says. “Each of them is at least a hundred years old and can last even much longer.”

The process of making a sleuk rith manuscript, according to Kok An, is not difficult but quite tedious. First, the leaves from local traing trees had to be bound together before being dried with heat. Each sheet typically contains a hole through which a string could pass through, and with these the sheets were tied together with a string to bind like a book.

The writers then etch the text on it with a knife pen, known as dek char. Finally, natural colourings, such as charcoal, are applied to the surface so the groove will be stuck with the ink, making the text readable.

Chen Chanratana, a Cambodian historian and archaeologist, says sleuk rith was a technique influenced by the palm-leaf manuscripts used by the ancient Indians, who had come to settle in a country which would then become Cambodia.

“Chinese records of the Kingdom of Cambodia’s history shows that Khmer people had already been writing on sleuk rith since the 5th or 6th century,” says Chanratana. “But, I believe our ancestors started using it far before that since the Indians came to Cambodia in the first century B.C.”

This technique, Chanratana adds, had been an important part of Cambodia’s traditional education, which allowed the people to pass skills, knowledge and information, especially about legal and social systems, from one generation to another.

“In the past, young Cambodian people went to the pagoda to study,” he says. “That was why these manuscripts were made and kept at the pagoda all over the country.”

“The paper, same with what we are using today, was just introduced in the mid-1800s by the French Administration.” 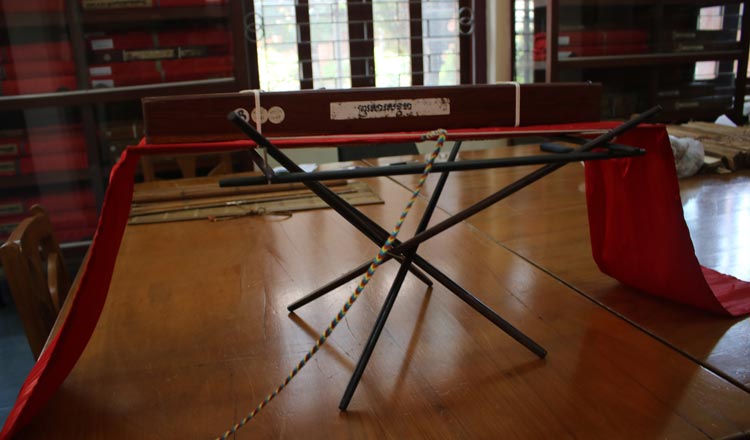 Unfortunately, about 80 percent of all manuscripts kept in pagodas’ libraries were destroyed by the Khmer Rouge during their ruthless ruling, no thanks to their extreme atheism. Even after the fall of the “black-shirt regime” in 1979, many of the surviving manuscripts were often left to rot as the desperate population entered pagodas and re-purposed the cupboards they were stored in.

Leng Kok An, the FEMC Director of Sleuk Rith manuscript preservation, still remembers the hardship he and his partner suffered in their journey to look for surviving manuscripts.

“Out of over a thousand pagoda we visited, less than a hundred still have the manuscripts,” Kok An says. “To restore them was no easy task. Many of them were stuck together, thanks to molds, termites and animals’ dung.”

In Taing Krasaing pagoda in Kampong Cham, Kok An found some sleuk rith manuscripts tied with small ropes made from people’s hair. He later discovered that in the past it was a tradition for a woman in the area to cut their hair to be made into ropes and give those ropes to the monks to bind the sheets before their marriages.

“They were doing that for good merit because girls or women cannot go into monkhood or study at pagodas,” Kok An says. “This is just one of the discoveries we made while looking for the manuscripts.”

FEMC has distributed their collection of sleuk rith manuscripts to five museums and libraries, including the National Library of Cambodia and the National Museum. They have even published their texts into books. However, Kok An claims that all of these are just “a small portion”.

“Many more manuscripts are lost, and very few people are interested in looking for them,” he says. “Not to mention that many of them are being sold in the markets to people who may not know anything about them.”

At the Russian Market, for example, Sleuk Rith manuscripts are found being sold in souvenir shops at around $50 to $80. Kok An calls such an act “a cultural deviance”.

“These manuscripts are the national antiques, and selling them should be illegal,” he says. “They should be in museums or public libraries.”

For almost three decades, Kok An has dedicated his life to preserving sleuk rith manuscripts. However, at 53, he is now the only person in the country working on this cause.

“I doubt Cambodia will find the lost manuscripts as no one is still making them now,” Kok An says. “It could mean that we would lose a great mass of knowledge, stories and information forever although our ancestors had worked so hard to keep them stored.”

“I can only hope that someone will continue doing it after I die.”

The EFEO’s Library at Wat Ounalom is open to researchers on Monday through Friday from 8am-11:30am and 2pm-5pm

Build your own fortune for retirement

The Farm-to-table movement is here