Sok Chanroeun is struggling to make ends meet and support her four children following the murder of her husband Hoem Chan, who was allegedly killed by two Japanese nationals in Siem Reap earlier this year. The two accused were charged in March with premeditated murder and Ms Chanroeun is also seeking compensation.

Slakram commune, Siem Reap province – Sok Chanroeun sits on a wooden bed in front of her house in Boeng Daun Pa village as she talks about how her family has found it difficult to make ends meet since her husband was killed in March.

Ms Chanroeun, widowed at 38-years-old, is now the sole breadwinner for her four children. She says her husband, Hoem Chan, was a 41-year-old taxi driver before he was killed earlier this year.

Two Japanese men had hired him to visit Angkor Wat and have been charged with premeditated murder over his death. The two men allegedly took him to a quiet area in Siem Reap province’s Puok district, killed him and stole his Highlander SUV.

“I was very shocked when I received the information that my husband was killed,” Ms Chanroeun says, tears rolling down her face.

On March 17, Japanese nationals Ishida Reimon and Nakakuri Ryuji, both 24, were arrested after they allegedly used a vegetable knife to kill Mr Chan at about 5.30pm that day along National Road 6 in Puok commune.

Ms Chanroeun notes that Siem Reap provincial police returned her husband’s body for a funeral. After a funeral ceremony in her house in Siem Reap, she and her husband’s relatives drove to their hometown of Kampong Thom province to bury him.

“His relatives and I brought his body to bury at our homeland in Kampong Thom province’s Baray district,” Ms Chanroeun says.

She notes that the Japanese Ambassador to Cambodia and his officials were in attendance at her husband’s funeral in Siem Reap to express their condolences.

“I am deeply saddened to hear of news that a taxi driver, Mr Hoem Chan, was killed by two Japanese nationals on 17 March 2019,” he said in the post. “I would like to express my sincere condolences to his family with the deepest sympathy. I pray for his soul to rest in peace.”

Ms Chanroeun notes that she has three sons and a daughter; Hoem Sela, 19, Hoem Panha, 14, Hoem Makara, 10, and Hoem Leakhena, three. She adds that her eldest son dropped out of school after Grade 8, while the others are still continuing their studies, with her second eldest son still in Grade 8 and her youngest son in Grade 2. She says her daughter has not yet started school.

“When I lost my husband, I had to continue to feed my four children alone,” she says. “So I don’t have much money to support my family, and especially for my children’s education because I’m just a small grocery vendor.”

She says that she was married to her husband for 21 years, noting that they moved to Siem Reap about 10 years ago.

Ms Chanroeun says she rents a house and sells a small amount of groceries in front of Kantha Bopha Hospital in Siem Reap city, noting that she can make between $5 to $7.50 per day, which is not enough to support her family.

She adds that since her husband died, her family has experienced difficulties, such as when her children get sick, no one can help her to take care of them, and she cannot afford treatment.

“Now there isn’t as much money for my family as when my husband was still alive,” Ms Chanroeun says. “He was able to make more but now I have to do it alone, while my children need more than $2.50 each per day.”

She notes that when her husband was alive, he could make more than $25 per day on average from being a taxi driver.

However, the Japanese embassy as well as Japanese humanitarians have provided money to support her family, she notes.

“The Japanese embassy is supporting my family with $240 per month for seven years,” Ms Chanroeun says.

She adds that the Japanese association in Siem Reap city also contacted her and told her that they will help her children learn the Japanese language until they complete all levels and then help them find jobs.

Ms Chanroeun and her late husband borrowed $15,000 from a bank and also borrowed additional money from friends to buy the SUV Highlander Mr Chan used to drive. She says he had it for five months before he was killed.

She says other parties have also provided monetary support, noting that a Akihiro Kato, CEO of Angkor Tiger FC and a Japanese national, provided $4,050 for her husband’s funeral, the Japanese consulate in Siem Reap city provided $700, while other provincial officials also provided money for the funeral.

“I think that it’s so sad and the family is facing difficulties,” Mr Akihiro said. “It was Japanese who caused this pain, so I want to help that family and provide some peace of mind.”

Khiev Sort, Siem Reap city’s Slakram commune chief, says that during the funeral in March, Bun Rany, president of the Cambodian Red Cross, ordered a representative to bring $740, and some food and equipment for the victim’s family.

He notes that the victim, Mr Chan, was a good commune resident and never had any disputes with anyone in the neighbourhood.

“He was a good person and he never had any dispute with his neighbours and moreover, after he returned from driving his taxi, he went to help to sell groceries with his wife in front of Kantha Bopha Hospital in Siem Reap city,” Mr Sort says. “I would like to express my regret and condolences to his family.”

Ms Chanroeun says that an immigration officer at Siem Reap International Airport had also called her to pick up $1,000 and told her that a father of one of the two Japanese suspects sent the money to help with her husband’s funeral.

“I want the Japanese embassy and the suspects’ families to support me and my children for our living costs and their education for a long time ahead,” she says.

Ms Chanroeun adds that after her husband was killed, she filed a complaint to the court and demanded compensation from the suspects.

“I ask the court to punish the suspects in accordance with the law and I demand $100,000 from the two suspects because I don’t have my husband to support our family any more,” Ms Chanroeun says.

She notes that she will hold a 100-day anniversary ceremony in memory of her husband at their home this week.

“I will hold a 100-day anniversary ceremony for my husband this Saturday at my house in Boeng Daun Pa village,” she says.

In late March, Siem Reap Provincial Court charged the two Japanese men with premeditated murder for allegedly killing Mr Chan on March 17 during an attempted robbery and put them in detention pending trial. However, the case has not moved forward since.

Yin Srang, provincial court spokesman, says the case is still under investigation by the investigating judge. He says he does not know when the court will set a hearing date for the case.

“The case is still under investigation by the provincial investigating judge,” Mr Srang says. “The suspects are currently being held in provincial prison.” 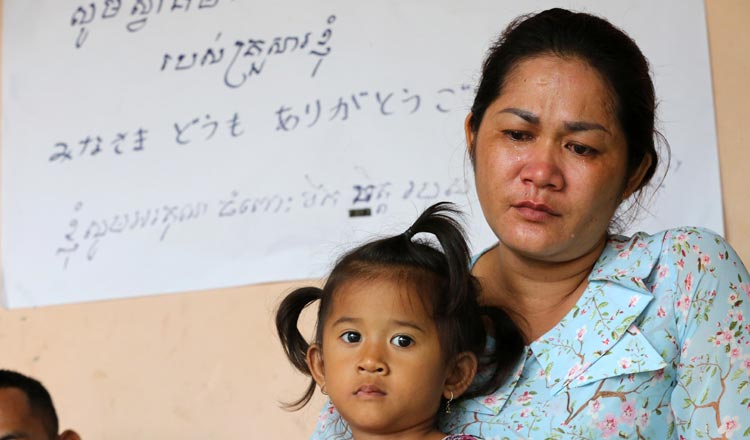 Theng Chamroeun, a lawyer for the two Japanese men, says that they have asked him to defend them in court, adding that he will study the complaint document on the case.

“I don’t know exactly why they killed a taxi driver because I have not yet asked them,” Mr Chamroeun says. “However, they recognize that they have made a mistake.”

Mr Chamroeun adds that the victim’s family filed a complaint against his clients for the killing and also demanded compensation. He declined to comment further.

In March, Brigadier General Phoeung Chendareth, provincial deputy police chief leading the investigation, said the two suspects arrived in Thailand on March 12 and after staying there four days, crossed the border into Poipet city on March 16 before heading to Siem Reap city.

“Ashida has confessed to the police that when they stayed overnight in Siem Reap [on the night of March 16] they hatched a plan to steal a car, but they could not do so as there were many CCTVs, so they changed their plans,” Brig Gen Chendareth said at the time.

On March 17, both of them again searched for a modern SUV to steal and decided to hire the victim for $30 to steal his taxi. At about 5pm in Pouk district, they asked the taxi driver to stop and killed him.

Brig Gen Chendareth said that during a scuffle inside the vehicle, Mr Nakakuri slashed the throat of the driver before pulling him down from the car to the roadside. The two accused then took off with the vehicle.

Just 30 metres down the road, the two crashed with a truck, leading to their arrest