In Cambodia’s film industry, where youth and fitness are prioritised, it is rare to see an actor or actress who remains active in his or her 40s. Only a few of them are still enjoying the limelight, as most of the attention have been given to who’s young and who’s in. But not the 44-year-old Chea Samnang. Oh, wait! It is Dr. Chea Samnang. In a career that spans almost 25 years, this physician has appeared in countless television dramas and films while also giving fulltime focus on his medical practice. He is also recognised for combining his two professions to educate the public about HIV and other social issues. Taing Rinith interviews the tireless, legendary film star.

GT2: Can you tell us briefly about your life?

Chea Samnang: I was born in 1971, 4 years before Khmer Rouge came into power, in Sangkat Lek Pram, Phnom Penh, where my parents ran a pawnshop. It was my ill fate that I had to grow up in the darkest age of Cambodia, working in a child labour unit in Kampong Cham while being separated from my parents. In 1981, two years after the fall of Khmer Rouge, my father brought us back to Phnom Penh, where I started school. Life was very hard at that time, especially when there are nine children in the family. Thanks to my hard work, I was accepted at the military school, which opened the door for me to study medicine.

GT2: How did a physician become an actor in the first place?

Samnang: It was almost completely unexpected. I never dreamed of becoming an actor. In 1996, three years before I graduated from the University of Health Sciences, my family was suffering from the worst financial hardship of all time. To help them, I decided to sign up in a modelling competition hosted by Lifestyle Magazine. Out of 200 people, I was the second runner-up. In the next year after that, some companies and studios were asking me to work with them. After graduation, I worked as a doctor mostly in provincial health centre, but the salary was so small, so it was acting that helped me make a living.

GT2: Do you remember your first success as an actor? Can you tell us about it?

Samnang: Initially, I was acting in small projects such as music videos, but I was later noticed by foreigners because I was both an actor and a doctor. I first gained huge attention in 2000 when I appeared in a PSI Cambodia’s TV commercial for the Number One condom. At that time, no actor wanted to work on that project because they were afraid that people would think they had HIV. But, I am a doctor and I had been committed to helping people. No kidding, after it was broadcasted on TV, people all over the country started calling me “Mr Number One”.

In the same year, the United Nations Population Fund (UNFPA) appointed me as their Goodwill Ambassador for Cambodia. It was a volunteer work, which means no financial return, but I gladly accepted it because I would be able to help my country, which at that time was experiencing a terrifying spread of HIV/AIDS. After that, contracts kept coming and I found myself acting as the protagonist in films and drama, as well as working as a host on local TV shows including The Last Minutes, a popular game show on TVK.

GT2: Of all the motion pictures that you have worked on, which one is your favourite?

Samnang: Asking me to pick my favourite film is like forcing me to pick a favourite child. Every film or drama I have acted in is always new and fun to me, but I can tell you about some of them. In Preah Bat Trasok Paem, a local film based on a historical event, I played the most historically significant character, Ta Trasok Paem, who became a King after he killed the previous King by mistake. I starred in several international projects, but the one I cannot forget is Angelina Julie’s First They Killed My Father, in which I had to speak French for the first time. However, I believe people remember me most for my acting in small-budget educational films and commercials produced by local NGOs. In fact, I love these projects the most, although I have not earned much money from it, I was doing my part to assist my country. They allowed me to apply my profession to help people learn about issues, from human trafficking to reproductive health.

GT2: The prime time for Cambodian actors’ career is usually in their 20s or early 30s. You are far beyond that but there are still projects lined up for you. Can you tell us how you have done that?

Samnang: First of all, it is my acting skills. It is not natural, nor did I go to acting school. It is what I have learned from everything that has happened around me. I learned to act like a businessman by observing how a very professional entrepreneur behaves, and I do it similarly when I have to play the role of a beggar. The key is to take away “myself” from my body, and put someone else in it. When I had to play someone’s husband, I always spend much time being with the actress who is going to be my wife on screen. Meanwhile, as a doctor, I know how to take good care of my health, which of course leads to a good body, making it age slower. Also, I believe that being single also helps with my career. If I were married, I would not have time for acting at such an age. 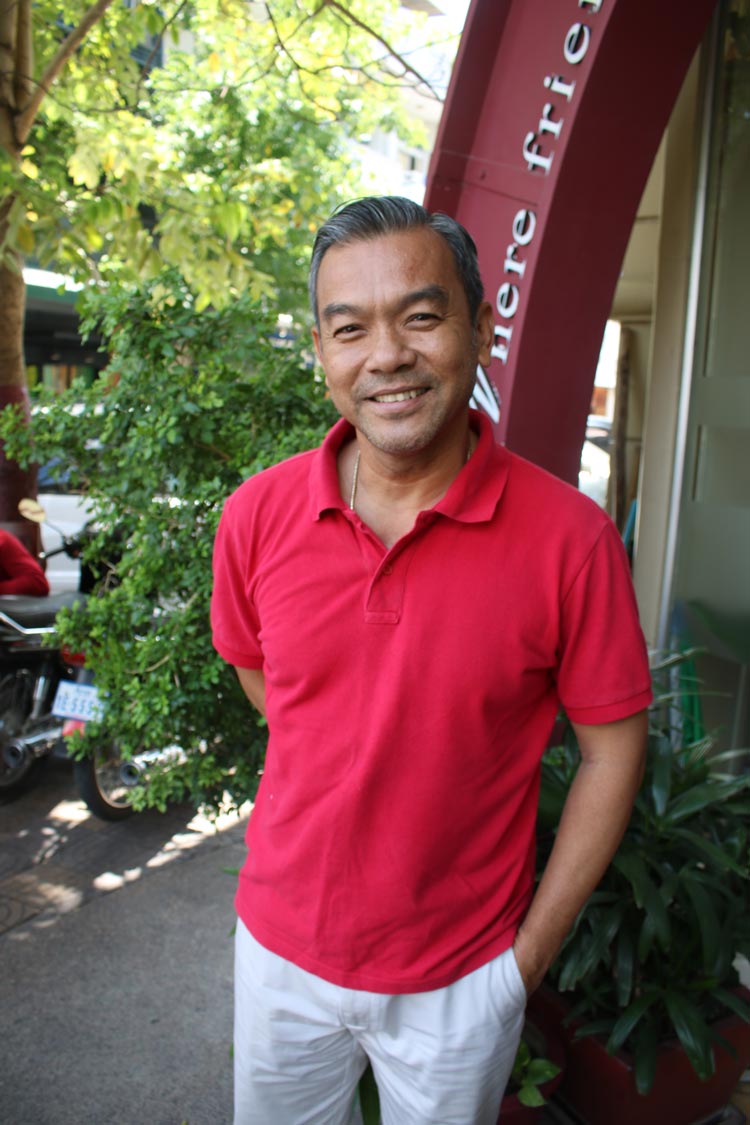 GT2: Does acting affect your career as a physician?

Samnang: Of course, it does, but what you really need is effective time management. Cambodia’s film industry is currently growing after years of downfall. I believe it is still hardly possible for artists to make a living from their artistic careers alone, given our economy right now. In Cambodia, it is not unusual to see poor or elder actors pleading for help from the public. For me, I am fine if no one pays me to act because I still have my medical practice. My message to all the young people who want to become actors, actresses or artists is that they can always keep their dreams but to achieve those dreams, they first need a real profession or business to support them.