Thang Sothea began his young career as an architect, designing buildings and other structures for his clients inside a small studio. But he eventually shifted to his real passion: fine arts. It was not hard, he says, not only because he can still work in his studio but also because his work is a synergy of the two disciplines. Taing Rinith features the emerging Cambodian artist.

In the studio of a modern house along Phnom Penh’s Riverside, 35-year-old Sothea Thang is working on a sculpture, which needs to be finished for an upcoming exhibition. On his laptop screen is a 3-dimensional design of an apartment’s bedroom, a project he worked on a few years ago, which he has been referring for inspiration for crafting his artwork.

Whenever the architect-slash-contemporary artist reaches an ‘artist block’, he usually goes to TINI Café, which he owns, to do some thinking or reading for inspiration. The small café near the Russian Market was designed by Sothea himself, while its décor mainly consists of his paintings and sculptures, such as the jute and metal-made Devata, which in 2015 was displayed at the Alliance Française in Bangkok, Thailand. Sothea’s career, like his café, is a synergy of architecture and fine arts.

Many years ago, Sothea was just a kid from Batheay District, Kampong Cham, who really liked and was good at drawing and painting, but he had not demonstrated any significant illustration of his artistic skill except for the few awards he won at primary and high schools. Nobody in his family is in architecture or arts.

“I decided to study architecture at Norton University because my family thought it was a good career for a boy who loved painting like me,” Sothea says. “I always wanted to be an artist, but my parents thought no one can make a living with creating artwork in Cambodia”.

However, it was not long before architecture genuinely gained Sothea’s interest, thanks to its requirements for artistic skill and aesthetic perception. After his graduation in 2007, he accepted an architectural position at a French architecture agency. From that point, he had been expected to move up the corporate ladder.

But sitting in a comfortable office for hours was not really something that the art-loving Sothea was keen on doing. Soon, he was determined to indulge his passion, and spent three years teaching himself to become an artist. At the time he left the company, Sothea was already deeply in love with contemporary art, in which he would gain national and international fame.

Recognised as an emerging Cambodian artist, Sothea has had held a number of solo and joint exhibitions. His first exhibition Happy Together (2009), the display of his collection of paintings at Siem Reap Hotel, was a success, and was soon followed by many more. The most notable one is perhaps the display of his works at Orenda Art International Gallery in Paris, France. 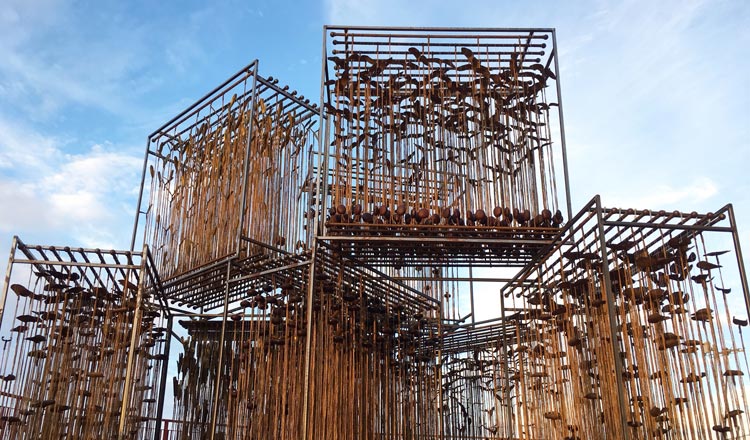 Yet, architecture still holds an important role in his life as he is still accepting architectural assignments, mostly renovations, as a freelancer. Although most of his assignments are mainly on old apartment buildings in Phnom Penh, Sothea claims that his knowledge in architecture assists him to incorporate unique styles into his artworks.

“My artworks aim at giving the structure they decorate a life, filled with an actual aesthetic value,” Sothea says. “Architecture, meanwhile, integrates concepts reflected in those works”.

An example of such works is The Forest which was at a joint exhibition Déambulations Artistiques in the garden of the French Institute. The work comprises 12 tree-like sculptures, made of more than six thousand aluminium cans of beer, soda, and energy drinks hand-cut into smaller leaves along a larger stem and joined together by clotheslines.

Moving with the force of the wind, The Forest gives out a similar shadow to the real tree it stands next to in the beautiful garden. According to Sothea, it is made to make the beautiful garden look even better, as well as to spread environmental messages.

“Through my experience in architecture, painting and sculpture, I better understand how one is related to the other,” he explains. 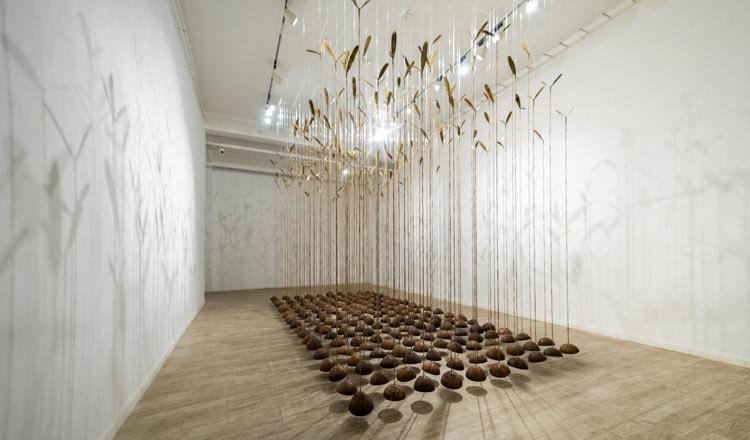 “I now continue to focus on the installation artworks, to discover more about myself, the different forms my inspiration can take, and experimentation with new choices of materials.”

The other notable works made by Sothea is Under the Water, a fish sculpture now being shown on a wall at Tngai Bang Chhat Resort in Kep City, and Sleuk, a sculpture of a tree branches now hanged on the white wall of the Toul Tompong branch of Brown Café.

Sothea adds that his artistic skill also influence his work as an architect, as he always puts his artwork in his blueprints first, and afterwards draws up a design or structure with the atmosphere that fit the artworks.

“A mutual cooperation exists between architecture and fine arts, and the two fields are almost inseparable,” Sothea says. “The big difference I can see is that I work alone as an artist, but I work with many people as an architect.”