Like all the other art forms, Lakhorn Niyeay suffered during the wars. People were all trying to survive, leaving behind tradition, culture and religion. But even when peace was brought back, the fading art struggled to keep up. Say Tola profiles Soung Sopheak, the man who is trying to revive Lakhorn Niyeay and to cast spotlight on spoken theatre once again.

Lakhorn Niyeay or Spoken Theatre was once a popular art in the Kingdom in the 1940s. The performance art is solely based on the characters’ speeches and the storylines usually depict deep social issues of the present time.

But during the chaotic and tragic years, Lakhorn Niyeay lost its glory. Nobody wanted to practice it, scared of getting punished or killed for devoting to an art form instead of following the orders of the dark regime. Even after the civil war, people hesitated to look back.

Lakhorn Niyeay isn’t an easy art. In fact, it takes almost ten years to master it – to learn how to perform, write script and direct. And even when you’ve mastered it, it does not guarantee a good career or a sustainable source of income.

But in 1996, Soung Sopheak took the chance to learn the art albeit having a completely distant reason: to get on an airplane one day. He started learning Lakhorn Niyeay when he came to study at the Royal University of Fine Arts in Phnom Penh.

“When I was picking morning glory with my grandpa, I saw an airplane flying over my head. I was told by my grandpa that it was just a flying steel. I had the desire to fly with it. Finally, theatre performance turned my dream into reality in 2012,” says Sopheak.

Over the years, Sopheak didn’t just achieve his dream; he had grown fully in love with the art and how it influences people and the society. He worked at the Cambodia Children’s Fund as head of arts education. There, he wasn’t able to implement his art, but he was able to connect with the children living in the dumpsite at Steung Meanchey.

“My heart was broken into pieces after seeing miserable lives of many helpless children at the dumpsites. There were many complicated stories over there. They lived like in hell realm. And I was asking myself ‘what should I do?’”

He thought of spoken theatre.

“After leaving my workplace, I called out some authorities to accompany me to the dumpsites. When we were there, we saw dead human bodies abandoned there. We went there to interview children and I transcribed those stories for a stage performance. I took 14 children to represent 14 provinces and let them express themselves on stage at Chenla Theatre through a story called, ‘Daytime’s Darkness’. It went very well but unfortunately, I was told by the authorities not to continue this kind of performance. They never believed such things were really happening.”

Even with the warnings, Sopheak did not stop. He was then selected to be trained as theatre director in Germany in 2012. And in 2014, he went to train film and media for a month in Australia.

A year later, he founded Khmer Art Action, aiming to make Lakhorn Niyeay alive and to show the important roles it plays in depicting stories commonly disregarded. He then had a project called, ‘Anderk Khlahan’ (Brave Turtle) to reflect history and bring courage to people through Lakhorn Niyeay. 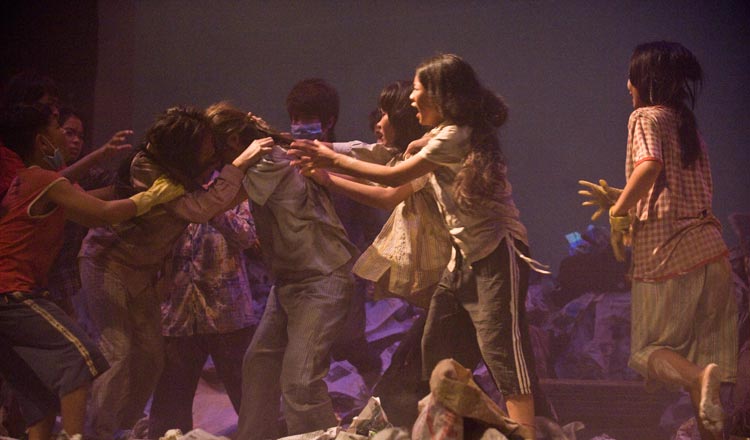 “I felt very delighted to engage youths in this project. ‘Brave Turtle’ is about Khmer Rouge regime and the scars it left. The spoken theatre itself encouraged people to be brave and be able to stand up, finding justice for their lives and how not to repeat bad history. I am very satisfied that it lasted for four years until 2018.”

Sopheak doesn’t get much from his advocacy. In fact, he spends his own money to ensure that his scripts reach the performance stage and that the art form is kept alive.

“Not too many artists are committed enough to last in this industry. One needs to have strong love and to be dedicated in preserving this art to be able to continue. And unfortunately, the public’s not really very supportive of this art. Even the government and relevant ministries don’t give us the support we deserve,” explains Sopheak on why Lakhorn Niyeay has never completely prospered despite huge efforts.

“I wish I could have many bodies because I am alone in dealing with just about everything including financial and other management affairs. It is tiring, but after a long day, I take pride in all our achievements over the years.”

Sopheak holds on to the very fact that a beautiful and storied nation such Cambodia will always be deeply associated to arts – no matter what kind.

“People are naturally born with arts, like when you cry, your mom sings for you to sleep. So it’s safe to say we can’t live without arts. It is a way of mental healing; even politicians need music when they are stressed with work. If one society has no arts, I bet that society will be in chaos.”

He is now working on connecting to more people, young ones especially, to love and help preserve spoken theatre.

“At present, I noticed that only students from poor families are showing interest. Most of the rich ones think it is useless.”

Sopheak thanks his father for allowing him to study the art in Phnom Penh more than decade ago. Though it’s not making him rich, it enables him to contribute something to his community.

“I was just a countryside boy who never cared about anything in the society before I started learning about this art. But as spoken theatre always picks societal issues, I started to care and asked myself how I can be one of the solutions.

“Importantly, I learned how to work independently after I left CCF. I started to shoot about seven educational short films, directed two spoken theaters and many more.”

No matter what, Sopheak keeps his optimism, fully believing “as you sow, so shall you reap.”

Earlier in May, he was invited to share about spoken theatre in Cambodia in the ‘Laboratory for Global Performance and Politics’ at Georgetown University in Washington, DC. Sopheak did not only represent Cambodia; he also was the only Asian among all the 200 participants from 40 countries.

“It was an opportunity for me – a guy from a small country – to open my eyes and understand global perspectives about spoken theatre. It inspired to move on and engage more audiences to solve our societal problems together.”

An Island on the doorstep