Prime Minister Hun Sen yesterday called for unity among Asian leaders to face challenges in the region, including the rise of populism and protectionist policies.

The Cambodian premier delivered his speech at the 25th International Conference on the Future of Asia, held this week in Tokyo.

The event brought together political, economic, and academic leaders from the Asia-Pacific region to discuss regional issues and the role of Asia in the world.

Mr Hun Sen said challenges like an aging population, energy insecurity, environmental degradation, and uncertainty over the rising role of automation requires all countries to work together.

“I believe this conference will provide new ideas and recommendations to help us find solutions to these challenges and build a sustainable, peaceful, and prosperous future through mutual understanding and trust,” Mr Hun Sen said.

He acknowledged the economic achievements of Asia as a region, which he said have contributed to social progress and poverty reduction, but added that Asia and the world are now facing a crisis that may impede future progress.

“We recognise the progress achieved in the world in terms of societal development and poverty reduction. However, now changes in the economy and geopolitics in the region, together with the fast pace of globalisation, are presenting new challenges.

“Many of these [challenges] arise from competition for power, influence, markets and technology among new and old powers in a globalised world.”

Mr Hun Sen said conflicts like the current trade war between China and the United States have the potential to destabilise the region. 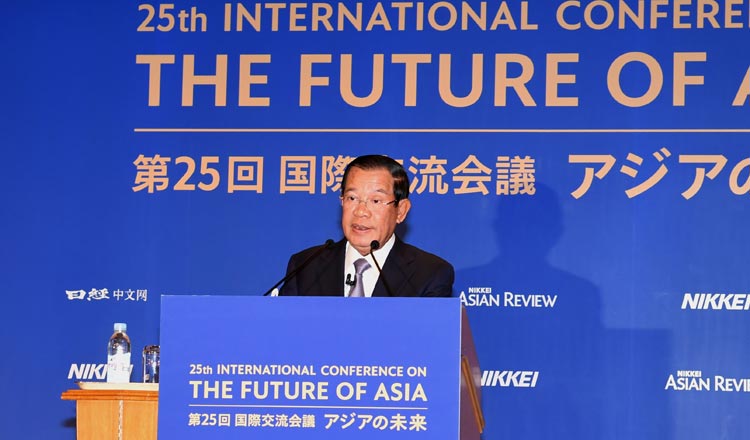 “In this regard, we are strongly concerned about peace, stability, and security in a world where multipolarism is being undermined by the global competition for power and other conflicts causing uncertainty and chaos and threatening Asia’s society and economy.”

Commenting previously on the US-China trade war, Kaing Monika, deputy secretary general of the Garment Manufacturers Association in Cambodia, told Khmer Times that Cambodia stands to benefit from the conflict, with exports of Cambodian travel goods particularly likely to increase as a result of the dispute.

“You should see even further interest in sourcing travel goods from Cambodia now. I predict that more and more companies that produce travel goods will choose to exit China, which could, of course, mean a boost for our industry,” Mr Monika said, adding that China still exports almost $5 billion to the US in travel goods.

“There is now huge potential for our travel goods manufacturing industry. With the trade war between the US and China in full swing, Cambodia-made goods are set to benefit further when orders move away from China to avoid heavy duties by the Trump administration,” he said.

Mr Monika said the rising cost of labour and more stringent enforcement of environmental laws will continue to prompt companies now based in China to relocate elsewhere, and that “Cambodia stands to benefit from this.”

“The question is whether Cambodia would be the first choice, the second, or the next in line… Peace and stability are important but other factors also count when it comes to the issue of national competitiveness,” he added.

During yesterday’s speech, Mr Hun Sen offered a series of recommendations, including restructuring the operations of international institutions based on three core principles – strong cooperation, respect for national sovereignty, and striving for peace and security.

“As a less developed country, Cambodia is very concerned about any unilateral decisions that depart from internationally agreed principles, rules, and agreements,” Mr Hun Sen added.