Prime Minister Hun Sen today highlighted the Kingdom’s success in ending decades of civil war thanks to his win-win policy during his attendance at the UN Conference Centre in Bangkok.

Speaking at the 75th session of the United Nations Economic and Social Commission for Asia and the Pacific at the UN Conference Centre in Bangkok, Mr Hun Sen said that the Kingdom has enjoyed peace and reconciliation in late 1998 when the Khmer Rouge defected and joined the government.

He said that the Win-Win policy brought an end to decades of war and armed conflicts. 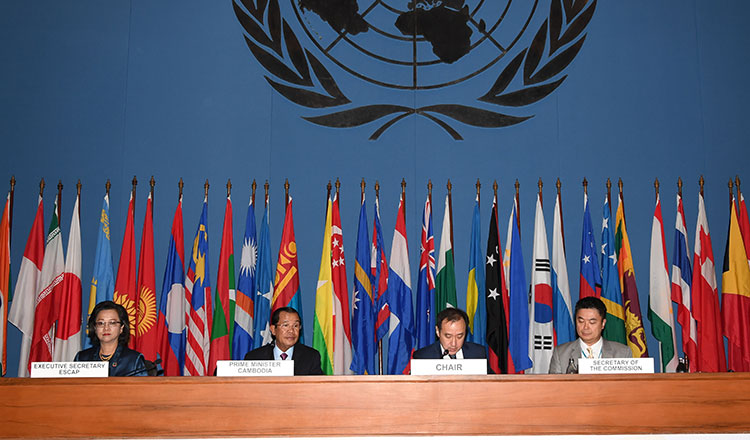 “This is the result of the win-win policy, which were laid out by ourselves without any external order or assistance,” Mr Hun Sen said.

“As a result of the Win-Win Policy, the war and armed conflicts were completely ended; and Cambodia could resolve all kinds of problems based on the trust developed between Khmer and Khmer, which is the factor bringing about peace that has deeply rooted in the society for over the last 20 years,” he said.

Mr Hun Sen said that three key components were to ensure everyone with the right to life, with jobs and careers for decent living and to ensure the protection of all their assets.