Home - Art and skateboarding at Mirage

Art and skateboarding at Mirage

It isn’t every day that an art gallery hosts a skateboarding event, but then again, Siem Reap’s Mirage Contemporary Art Space isn’t your everyday art gallery.

He’s also, among other things, a photographer, a musician and music producer, and a skateboard fiend, having first set up the Mirage Skate Café in 2017 before opening the Mirage gallery that now graces downtown Siem Reap and which, as well as showing cutting-edge contemporary art, will also be the gathering point for Go Skateboarding Day 2019 on June 22.

So what’s with Siv and skateboarding?

“I started skateboarding around 2005. I can’t really describe it – it’s just something I enjoy doing,” he says.

“For Go Skateboarding Day, we’re planning to get all the skaters of Siem Reap together, backside lipslide some gnarly rails and cruise around temples. That simple.

“And by the way, skateboarding is not a sport, it’s art.”

Speaking of art, Siv succinctly lays out his concept for the gallery.

“Mirage Contemporary Art Space is an artist-run initiative, our goal is to explore and experiment with different mediums and art forms,” he says.

“We also run our very own art and design consultancy. We provide many services such as photography, graphic design, illustration, interior design, art collecting, and many more.

“For example, clients can consult with us when they need help on rebranding their company or redecorating their office.” 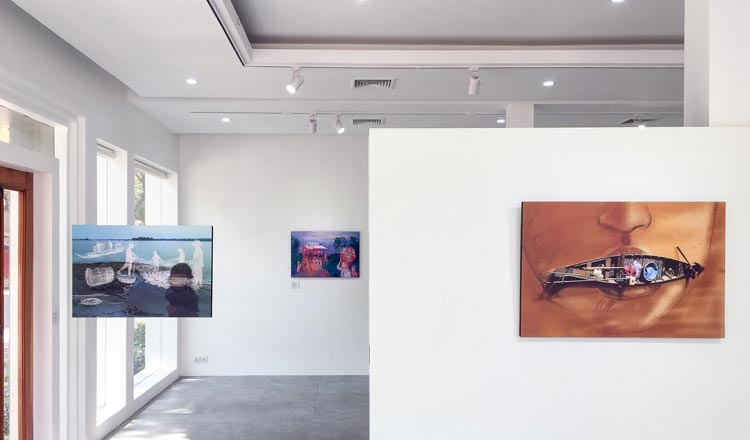 Fine-art wise, Mirage is currently showcasing an exhibition titled, ‘A Place for Us’, a collaboration with Kampot’s Open Space Cambodia – founded by another Canadian expat, Lauren Iida – which promotes emerging Cambodian artists in Kampot.

This is Open Space Cambodia’s debut exhibition in Siem Reap and showcases the work of six of its members – Chan Phoun, Morn Chear, Pav Rasmey, Long Lavy, Srey Norp, Rath Rathana, plus work by Lauren. The exhibition runs until June 10.

The exhibition title refers to the space artists needs to create their work, be it mental or physical, and the exhibition created quite a buzz on opening night.

“I very much enjoyed the opening night, especially because many Cambodians joined us – about 80% of the guests were Cambodians,” says Mirage’s new director of communications Kasia Sumislawska.

“It was also uplifting to see the artists guiding the guests through the exhibition and explaining their works, motivations and struggles. They had worked very hard for this – they practiced public speaking in English and prepared themselves.“Also the selection of artworks was a challenge. Many of them are very productive and arrived at Mirage with a lot of artworks. It took few rounds of discussions to limit the number of works to its current shape, but I very much like the result.”

“Our next opening is on June 14 with a watercolor artist from Singapore, Kwee Horng Foo, who rents the space at Mirage to sell his artworks and donate all his profits to Colours of Cambodia,” she says.

“I certainly look forward to the collaborative audio-visual exhibition by Neak Sophal and Emily Howe about the lives of women artists in Cambodia.

“The exhibition will feature portraits of 15 female artists shot by Neak Sophal and interviews by Emily Howe who, through her research and practice as a ethnomusicologist, music educator and conductor, explores music and sound and is passionate about making music experiences accessible to all audiences.

“Visitors of Mirage Contemporary Art Space will have a chance to listen to the interviews, and during the opening, meet some of the artists in person and witness a special performance put by them.

“Our other exhibitions this year feature Romcheik Pram from Battambang, opening on June 21.

“In the third quarter of the year we will focus on Khmer type and poetry and we will close the exhibition year with a photo show.”

She adds that this versatile programme will be complemented by a “few design pop-ups,” and of course not forgetting June’s Go Skateboarding Day.

This month, the gallery also began working in with Khatna –a Phnom Penh-based community initiative founded by designers for designers – and its project 45 Days of Khmer Type, which aims to promote Khmer typeface design as well as to express the creativity and new possibilities of using Khmer letterforms in design.

This initiative runs until June 14, and later in the year will hopefully be the basis of another exhibition at the gallery, according to Mirage creative director Manuela Kind.

“Therefore I find that initiatives such as Khatna are much needed – they contribute enormously to the Cambodian design community.

Their most recent project, ‘45 Days of Khmer Type’, makes visible how much creative talent there already is in Cambodia, and that’s only the beginning.

“There is so much more to come…I’m also happy to announce that Khatna and Mirage are currently planning a collaboration in the form of an exhibition and design workshops later this year, which will include the 45 Days of Khmer Type – more details coming soon.”

YOU CAN CONTROL YOUR GENES

Savann Thav: An Exhibit at Sofitel