One year ago, a group of expats, also martial art enthusiasts, formed a group to practice Sambo, a martial art and combat sport from the former Soviet Union under the instruction of a Russian master. The group wants to revive the sport, and build a fully operational school that will reintroduce Sambo to both Cambodians and expats in the Kingdom. Story by Rinith Taing.

The students at Australian Centre of Education know Kevin Bahler as a gentle American English language teacher, who helps them prepare for their IELT tests. But, like Superman, Bahler has something behind his teaching job: a martial artist.

On a Wednesday morning, Bahler is the first to arrive at a building at the Olympic stadium, reserved for the Cambodian Aikido Association. However, Bahler is not here to practice Aikido although he got a black belt in this Japanese martial art. He comes here to learn Sambo, a hybrid martial art formulated by the communist Soviet Union, which he does three times per week.

“I am really into combat sports, and Sambo is a very interesting form of self-defence,” Bahler says.

“We begin with learning grappling, which is somehow the combination of throwing, taking down and submit the opponent. At the advanced level, we do Combat Sambo, which involves punches, kicks, elbows, knees, headbutts and groin strikes.”

Bahler is later joined by two of his fellow countrymen, Jim Wilson, a musician and a martial art expert along with Anne Chreiien, a photographer and Wilson’s wife. Today, only three of them are training together since the other four students are busy. Later, they are changing into their kurka, Sambo training uniforms which look similar to a Judo gi top and belt, but has wrestling style shorts and shoes. Unlike most martial arts, the uniforms, which come in red or blue, do not show the ranks.

A few minutes later, the master, a large and well-built man in his 40s, comes. He is Oleg Derkach, a former Sambo instructor in the Russian military ledge.

After a brief warm-up, Bahler and Anne spend the next two hours on practicing and sparing under Oleg. They are taking turns throwing or taking down one another while Wilson is giving them additional instructions.

The training seems to be very tough, and at one point, Anne breaks into tears due to the pain in her leg while Oleg performs a submission move called “calf crusher”, which involves putting pressure on the opponent’s calf. Although Anne suddenly shouts she is done, she gets back into the training after a short break.

“I felt so much better after I started doing this a few months ago,” Anne says. “I started doing it with Jim and Kevin after I experience physical pain resulted from my lifestyle.”

“Of course, the training is exhausting and painful sometimes, but Sambo is a very good exercise and self-defence.”

Although Oleg does not speak English and use Google translate to communicate with his students, his students understand him well enough with his physical demonstrations.

“Sambo is a very true form of self-defence,” Oleg says. “Instead of focusing on a single element, such as Judo on throwing and Tae Kwon Do on kicking, Sambo has every move you need to fight in real life.”

“What I love the most about Sambo is that unlike Aikido, you don’t need much space to take down an opponent,” Kevin Buhler adds at the end of their lesson. “Every move is super effective.”

Sambo Phnom Penh, as the four practitioners call themselves, wants to start a fully operating martial art school based on Sambo, in which Oleg is the headmaster. They are building up the business plan while more and more interested expats are joining them. However, getting the local people to join could be a big challenge, due to the language barrier, and their different view towards the term “martial art”.

“People here mostly think this [throwing a punch] is martial art, but they are wrong,” Jim Wilson, the martial art expert adds. “We want to introduce them to real fighting, which could help save their lives.”

“There are very few rules in Sambo. Let’s be honest; those who want attack do not care about rules.”

However, the right term should be “reintroduce” since Sambo, although not well-known now among Cambodians, is not new. In fact, the Kingdom has even had a few champions of its own in this sport.

During the 80s, the Soviet Union was one of two main allies, the other being Vietnam, of Cambodia, whose official name at that time was the People’s Republic of Kampuchea. In 1984, the Eurasia’s socialist bloc sent a few Sambo masters to teach talented Cambodian young people, as a part of cultural exchange between the two states.

One of the top students is Nang Ravuth, a Cambodian experts in combat sports and the former owner of Baksey Chamkrong Fighting Gym. In 1989, Ravuth competed in an international Sambo tournament, hosted by the PRK at Phnom Penh’s Olympic Stadium and attended by Sambo practitioners from all over Europe. Of all Cambodian competitors, Ravuth says, he was the only one who won a medal by defeating a Ukrainian opponent.

“I won many medals in Sambo, but no one knows it now,” Ravuth says. “The Sambo project of the Ministry of Education ended along with the country’s communist regime.”

“Today’s generation does not know what Sambo is, let alone my name.”

Another remarkable Cambodian athlete is Dr. Sau Sokunna, currently serving as the Deputy Director of the Department of Hospital Services at the Ministry of Health. Sokunna says he started learning Sambo during junior high school only because he thought it was going to help him get taller. However, before long, he found himself receiving an honour to represent Cambodia in an international youth championship in the Soviet Union in 1987.

“I defeated a Mongolian and a Soviet opponent before losing to a competitor from France,” Sokkunna says. “I saw Cambodia’s flag being raised during the awarding ceremony, but at that time, as a boy from a poor and war-torn country, I did not understand the meaning of pride yet.”

Instead, Sokunna at that time was happy with the money he earned by selling “underwear” which he brought from Cambodia to the people of the Soviet Union.

“They were in high demand in the Soviet Union at that time,” Sokunna says, laughing.

“When I returned to Cambodia, I bought a brand new bicycle. It was like a Mercedes at that time.”

Sokunna stopped practicing Sambo when he had to enter college, just one year before the class ceased. Like Ravuth, not so many people know about his success in Sambo. Although he has not been doing it for almost 30 years, Sokunna says he is happy to help Sambo Phnom Penh grow. 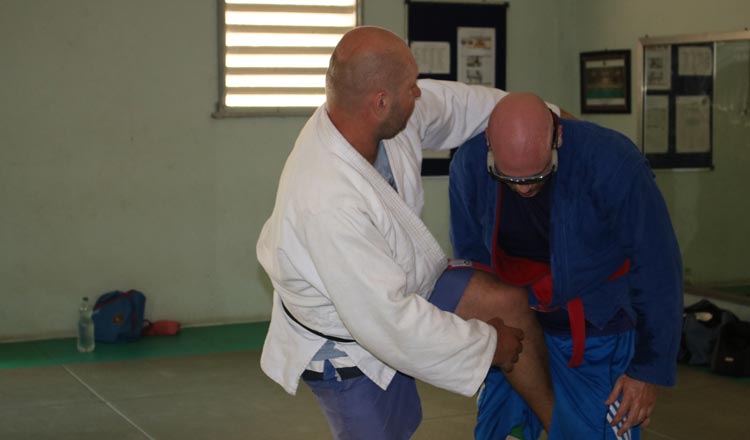 “Sambo gave me a great body and good health, so of course, it is a good form of exercise,” he says. “It is also a great self-defence technique that everyone should learn.”

All about the pancreas