Financial literacy is an often used term which is rarely understood. What it would actually infer to be the convergence of confluence of financial, credit and debt management and the knowledge that is necessary to make financially responsible decisions – decisions that are integral to our everyday lives.

Financial literacy affects the daily issues an average family makes when trying to balance a budget, buy a home, fund the children’s education and ensure an income at retirement.

This certainly implies that it is more than just checking to see how much money one has in their bank account or wallet but encompasses a whole plethora of awareness that only such literacy brings.

In many countries, Cambodia, included, financial literacy is a key factor in sustainable financial development in order to contribute to national, social and economic development as without it, the masses will be trapped in a quagmire of burden which even the state may not be able to rescue them from.

Having taken cognizance of this and the critical importance of financial literacy, Prime Minister Hun Sen initiated a multi-agency/ministry, headed by the National Bank of Cambodia to collaborate with relevant line ministries such as the Ministry of Education, Youth, and Sport to insert financial education into the general education program. 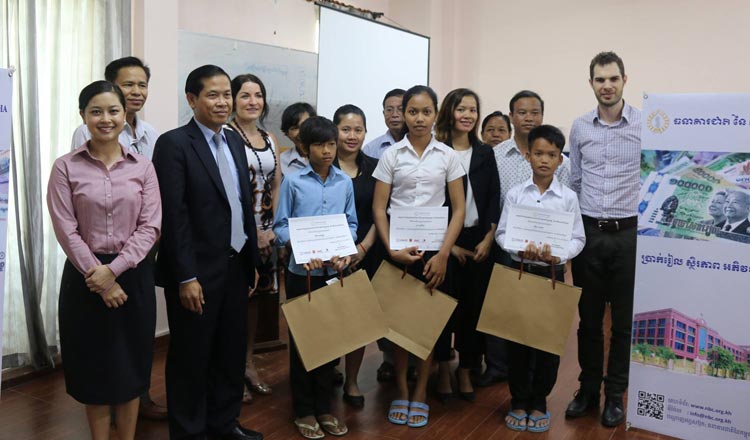 In addition to this, the Ministry of Women’s Affairs was also roped in as a key component of the financial literacy initiative since most of the households on Cambodia, are dominated by women and most of the rural poor in Cambodia who are most susceptible to the effects of financial illiteracy are women.

Financial literacy forms the backbone of the Financial Sector Development Strategy 2016 – 2025 which mandated relevant governmental institutions to organize programs for promoting financial education in order to enhance financial knowledge among the public especially for the preparation of the national general academic program, spearheaded by the NBC and the other two line ministries as mentioned above.

Key to the success of this initiative is the drafting and authoring of financial literacy curricula into the school textbooks and arming teachers to disseminate the correct information on managing one’s finances, whether it is the first 100 khr note or the first us dollar note.

The level of financial literacy varies according to education and income levels as irrespective of whether one of rich or poor, one can be just as ignorant about financial issues as less-educated, lower-income consumers.

Hence the birth of the National Financial Literacy Programme since the Organization for Economic Co-operation and Develo-pment has already established that financial literacy is a core life skill for participating in modern society and that children are growing up in an increasingly complex world where they will eventually need to take charge of their own financial future. Compounding the problems associated with financial illiteracy, it appears financial decision-making is also getting more onerous for consumers with the advent of technology. This makes it even more critical for the NBC, the Ministry of Education Youth and Sports and the Ministry of Women Affairs, to be the three main drivers of the financial literacy programme.

It adds that national surveys show that young adults have amongst the lowest levels of financial literacy. This is reflected by their general inability to choose the right financial products and often a lack of interest in undertaking sound financial planning.

Even from an early age, children need to develop the skills to help choose between different career and education options and manage any discretionary funds they may have, whether from allowances or part time jobs.

Having said that, now, let us consider the following:

How would you answer this question?

“If you lost your main source of income, how long could you continue to cover living expenses without borrowing any money or moving house?”

This is one of several core questions devised by the Organization for Economic Co-operation and Develo-pment to determine the level of a person’s financial literacy, which it defines as “a combination of awareness, knowledge, skill, attitude and behavior necessary to make sound financial decisions and ultimately achieve individual financial wellbeing”.

You can answer it in a number of ways, from “Less than a week” to “More than six months”. You can say “Don’t know” or even refuse to answer. It’s not pass-or-fail. Some questions are more pointed.

“Imagine that five brothers are given a gift of $1,000. If the brothers have to share the money equally, how much does each one get?”

“You lend $25 to a friend one evening and he gives you $25 back the next day. How much interest has he paid on this loan?”

The OECD first conducted the survey in the G20 nations in 2015. They did not do so well. Less than half the adults surveyed achieved the minimum target score. Over the past two years consultants with the Asia Develo-pment Bank Institute gave the questions to Cambodian and Vietnamese people and published their latest updated findings in January 2019: Cambodia came out last. “The financial literacy scores are only 11.8 and 12.5 in Cambodia and Vietnam, respectively, out of a total possible score of 21,” Peter Morgan and Long Trinh reported. “Of greater concern, perhaps, is the fact that the share of respondents who answered correctly five out of seven financial knowledge questions, which is considered to be the minimum target level, was very low. Based on our samples, only 17 percent of people in Cambodia…answered correctly five or more questions.”

In Cambodia, several strategies are being undertaken to increase financial literacy, many of them by the National Bank of Cambodia. The NBC launched a “Let’s Talk Money” campaign in 2015 to use videos and comic books to help educate young people about financial matters and last year the NBC teamed up with other relevant stakeholders such as VISA to do the same over mobile phones with an “NBC-Edu” app and by dialing 3-2-1.

The NBC has also been working with the Asian Development Bank, other organizations and the Ministry of Education, Youth and Sport to teach the subject through the national school curriculum.

“Financial education should be provided to all Cambodian students from the very young age to provide them with a foundation in order to access and use financial services securely and effectively in the future,” says NBC’s director general of central banking, H.E. Chea Serey. She says that that the first step in the project would be developing a national curriculum for schools to teach the subject and added that the NBCand the ministry, together with all stakeholders would work together to develop it.

Financial literacy as a school subject to increase students’ knowledge about money is being introduced nationwide in phases as part of the Cambodian School Curriculum Project, with the Ministry of Education collaborating with the National Bank of Cambodia (NBC), Asian Development Bank, Good Return and the World Education Cambodia.

Financial literacy must be a life-long agenda