The recalcitrant opposition’s repeated call on the military to partake in the regime change aims to divide and destabilize the country. It is necessary for the government to take strict measures to prevent the potential emergence of “watermelon” soldiers.

Security sector reform-which aims to address security problems and improve the effectiveness and efficiency of the security forces through comprehensive institutional reforms- is becoming even more critical for the Kingdom.

Security sector reform must be saliently, cautiously implemented. Some of the reform measures include reduction in ranks of security officers and symbolic generals, which must be carefully and cohesively carried out to minimize resentment, unhappiness and silent ‘reverse fortitude’ as well as to weed out possible agent provocateurs within the rank and files to ensure a professional, well-disciplined and well looked after security forces.

In the first reform process of the defense forces in the mid nineteen nineties, the number of generals in the Royal Cambodian Armed Forces (RCAF) had been drastically cut from 1,920 to about 200 but by 2006, the number had swelled to more than 700.

Although the army has changed it shape, demeanor and appearance to that of a well-equipped and trained unit, as can be seen by specialized units on display during official visits of foreign leaders to Cambodia or at the national events, discipline remains a problem.

In some cases, the crimes committed by those in uniform affect public trust in the security establishment. There were several reported cases that foreigners illegally used the car number plate under the military or police forces. The optics do not augur well for the morale and professionalism of the security forces.

Professionalism and support scheme need to be strengthened. Cambodia does not have a systematic mechanism to downsize the ranks of the security forces. Any attempts to reform the security sector face the risk of failure as seen in the past when demobilization exercises, which involved thousands of soldiers and millions of dollars, did not produce tangible results as expected.

A pilot programme for the demobilisation of 1,500 soldiers was introduced between May and July 2000, financed by the World Bank. This pilot programme offered payments of 360$ per demobilised combatant. The average cost per person was 1,500 dollars. However, the efficacy of such a progaramme is questionable. 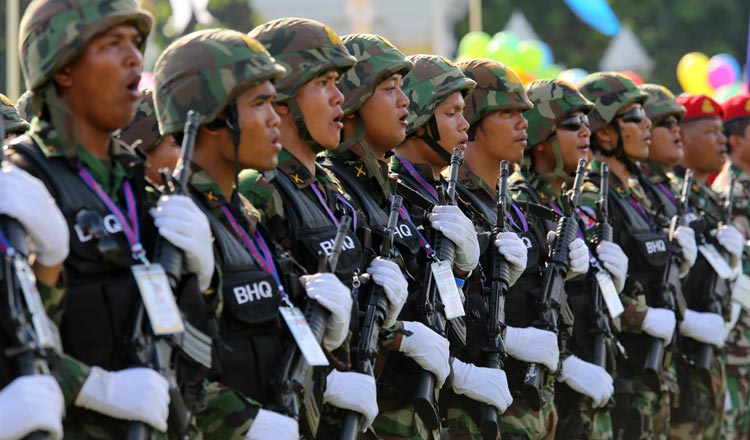 They were entitled to receive pensions, plots of land, and public houses under the demobilization and veteran’s scheme but did not go well due to various reasons including land grabbing. For more than a decade, the local authorities have not been able to effectively resolve the land grabbing issues.

This brings us back to the issue of the opposition leaders hiding in foreign countries who repeatedly call on the army to overthrow a legitimate government. It is a security concern.

The overseas opposition movement is manipulating the loopholes and weaknesses in the security apparatus for its pollical ambition to stir a military uprising against the government. And it is also its strategy to provoke the government into unnecessary reactions and sound bites.

Structural deficiencies, a lack of discipline and financial benefits, and uncoordinated civilian and parliamentary oversight over the security sector are the main reform agenda that the government should focus on.

Downsizing strategy has been one of the priority areas. In the first mandate, the ranks of military generals were reduced from thousands to about one hundred. Command and control structure within the armed forces could only be enhanced once the ranking system is properly structured and effective policy coordination is in place.

Security sector reform is expected to be implemented robustly in coming months and years in order to foremost maintain peace and stability and to counter potential threats to be imposed by the hostile overseas forces.

Strengthening professionalism, introducing meritocracy, promoting discipline, and developing incentive mechanism are the key areas of security sector reforms. The parliamentary oversight over the security forces should be encouraged.

International development partners should explore cooperation opportunities to coherently assist Cambodia to successfully implement security sector reform through the provision of technical expertise and financial support in order the strengthen the professionalism of the security forces.

Chinese base allegation is a war-mongering prophecy

Can Cambodia Balance China with the West?