Many parents see skateboarding as a dangerous sport, given the involvement of riding and performing tricks with a wooden board on four small wheels, not to mention the bad traffic and the high number of accidents in the country. However, an international NGO has been using skateboarding as a method to engage and empower children, especially the disabled and underprivileged. Taing Rinith goes to Skateistan Cambodia in Phnom Penh to document the organisation’s mission to build a better society through the innovative action sport.

Several times per week, Toeul Sokna, an 18-year-old high schooler, go to the Skateistan Cambodia, located in Factory Phnom Penh, a kilometer away from Monivong Bridge along National Road 2. Among those residing and working in the area, it is known as “a place which gives free skateboarding lessons”. Yet, Sokna no longer goes there to learn; instead, despite her young age, she goes there to teach.

On a Friday afternoon, Sokna is instructing a young girl on how to skate on a half-pipe, a structure resembling a cross-section of a swimming pool, topped by copings and decks. Sokna is holding her little student’s hand to make her feel safe while trying to keep her balance. The student looks nervous, but she is also clearly enjoying what she’s doing. Also on the 500-square meter skate park are other ten skateboarders, all under 18, training themselves in performing various tricks. 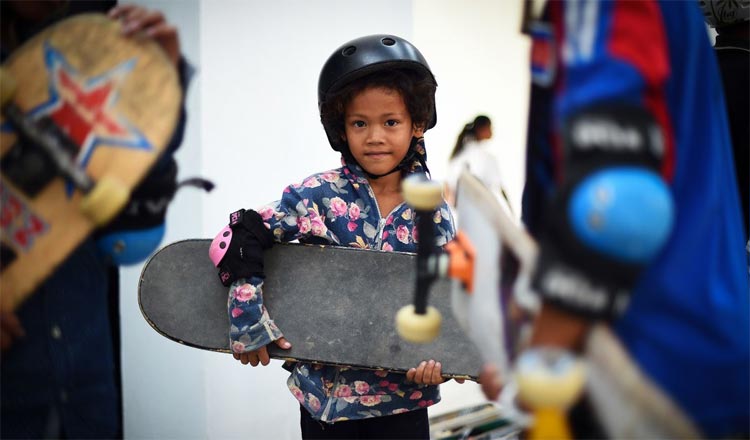 Skateboarding drew Toeul Sokna’s attention since she was only a little girl. Sokna first saw people riding and performing tricks with their skateboards for the first time during a family visit to a public park in Phnom Penh. The skateboarders’ agility and tricks, such as kick flip and Ollie, amazed Sokna, making her want to skateboard, too.

“I told my father that I wanted to skateboard too,” Sokna tells Good Times 2. “But, he said he would never allow it because I am a girl. Besides, he thought it was too dangerous for me.”

Yet, Sokna did not give up. She often went back there and asked the skateboarders there to let her try on their boards. On her first try, she fell in love with it.

About five years ago, Sokna was introduced to Skateistan Cambodia, which she knew at that time as an organisation which gives free skateboarding lessons to those who apply. Without much hesitation, she applied to be a student there, but she would not be accepted without her parents’ approval. Like Sokna had expected, her parents at first refused it, but they eventually gave in after a long persuasion.

For many of the students, learning to skate is not easy as they had expected because it requires hard work and strong commitment. While some of the students stopped coming for their lesson, Sokna did not give in, although she twisted her wrist a few times, and she had learned to do many tricks. However, these were not the only things Skateistan taught her. Sokna had also acquired many life skills from the NGO’s course outside of the skate park, such as good hygiene and effective communication.

“I was not impolite, but I used to be an ignorant, fun-loving girl who does not know how to talk nice to people,”Sokna says. “After years of being with Skeateistan, I am now a much different and more mature person.”

When Sokna reached the age of 17, it was time for her to graduate. But she chose to stay with the NGOs as an instructor, passing her skills to next generation of skateboarders.

Currently headquartered in Berlin, Germany, Skateistan set an objective of empowering children through skateboarding and education. Founded in 2009 and opening its first skate school in Kabul, Afghanistan, Skateistan launched its skate school in Cambodia in 2011. 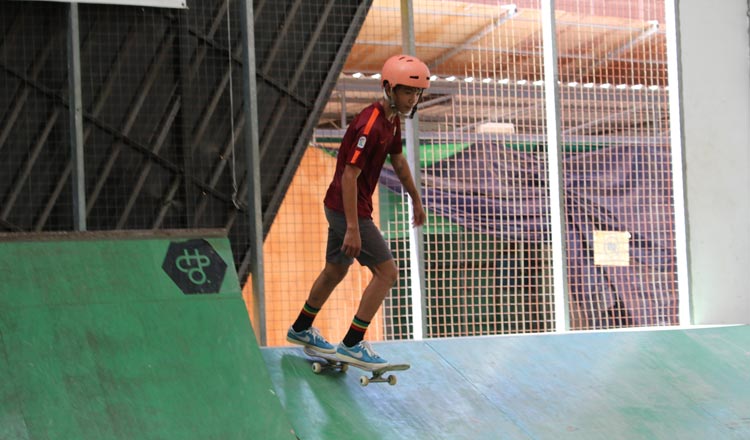 Its arrival in the Kingdom, according to its website, is to respond to Cambodian children and youth’s “limited access to quality education and fair employment, crime, violence, and discrimination, especially towards girls and youth living with disabilities.”

“Our objective involves drawing children and children’s attention to skateboarding and then put them into our education programme, giving them life skills which are essential for their growth,” says Khieu Chetra, general manager of Skateistan Cambodia.

“Skateboarding gives them confidence and chance to improve communication and teamwork while our educational programme’s modules teach them various skills, from how to protect themselves from abuses to everything around the world.”

Skateistan Cambodia gives children, whom they define as those under the age of 18, free skateboarding lesson for an hour per day and allows them to use their skateboards, which are quite expensive in Cambodia, and other equipment. However, they are also required to study in the classroom or read books in the NGO’s library. 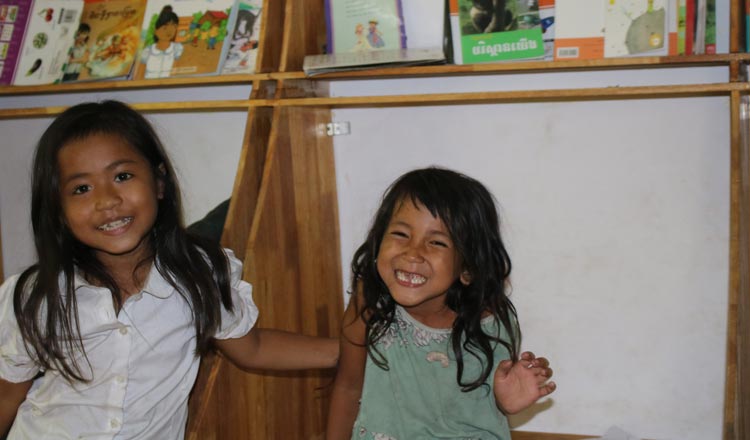 “The schedules are adjusted to the children’s timetables at public schools while we also have special classes, such as those for the girls or the disabled only,” Chetra adds.

“We have also held many events, such as skateboarding competitions, to spice up and to engage the parents into what their children have been doing.”

In 2013, Skateistan Cambodia was even visited by the legendary professional skateboarder Tony Hawk, who performed a few impressive stunts on its skate park.

Many of the children apply for the skateboarding lessons at Skateistan Cambodia are from underprivileged families, who look to escape their hard life by doing the action sport.

Thin and too short for her age, Srey Nich, 12, is a shy girl who does not want to talk to strangers, but she is not afraid of doing a kick flip or skate down a high deck. Although she falls flat sometimes, she always gets up and tries again.

“There is nothing to be afraid of,” Nich says during a break on the skate park. “It is so much fun.”

Similar to Srey Nich, the 15-year-old Sok Leap, the son of a poor construction worker, enjoys skateboarding so much that he almost forgets the time while doing it. Meanwhile, he also relies on the educational programmes provided by Skateistan as a substitute to general education since he dropped out of school two year ago at grade 5.

“Apart from skateboard, the teachers teach me a lot of things, even including how to wash my hands properly,” Leap says. “I also love reading books and painting in the library.”

However, Leap wishes he could return to school one day and study to become a teacher.

General Manager Chetra is planning its Back-to-School project, which will help the young dropouts to go back to school. Currently, the NGO, now having only a small staff of eight people, is looking for more specialists to help it expand its scope of work.

“I have never skated before, and now at 40, it is too late for me to start it, but I really enjoy watching the children skate bravely,” Chetra says.

“Of course, all sports, including skateboarding, incredibly benefit children and help them grow up to be healthy and become good citizens of the country.”