Home - THE ART OF WORDS

I saw synergy between people from the outside and young poets here. So this combination of creativity enables the existence of contemporary expression.

It is not very common in Cambodia to witness poetry events that go far beyond classical forms of writing and chanting. But earlier this week, a dozen of talented poets from different nations gathered at Ploy’s Café to unleash their voices through varied forms of poetry for the ‘Small Avenue’ hosted by Slap Paka Khmer (Khmer Collaborative Writers).

‘Small Avenue’ did not define the small space where it was held. It was – and is – a metaphor of the current society where strict cultures and practices are being imposed on women. It is also about the “limited” freedom of speech and the Hinayana that not too many people can achieve in one lifetime.

There were two sessions of the poetry night. The first session was Open Mic. A lot of poems from Cambodian, Filipino and French nationals were shared to the audience. Most of the poems depict the poets’ personal experiences as well as their perspective on social issues. Despite differences in languages and tones, all poems earned big and loud cheers from the big audience, who were poetry enthusiasts themselves.

But ‘Small Avenue’ did not only highlight the kind of poetry commonly heard in this present generation – those about love, dreams, goals and careers. Some poets stood up and recited critical poems from acclaimed poet and philosophical writer Khun Srun.

After the first session, audiences were introduced to a contemporary form of visual poetry. In this form, poems were shown alongside videos and voices of chanting. There were five poems displayed: The Turtle (by Yeng Chheangly), They’re Leaving (by So Phina), Children’s Play (by Tomyo Costa Ito), Raining in the Wrong Place (by Chin Meas) and Strobe Light ( by Yeng Chheangly).

Teri Yamada, co-founder of Nou Hach Literary Journal, said she personally noticed tremendous change in the literary scene in Cambodia. She revealed how conservative local writers were decades ago, and how they used the old forms of poetry. But with the present generation, new forms of poetry gained popularity.

“I saw synergy between people from the outside and young poets here. So this combination of creativity enables the existence of contemporary expression. I would like to call this as a soundscape which combines visual images and poetry,” Yamada shared.

When Teri arrived in Cambodia in 1996, the Kingdom seemed to have been stuck in its conservative traditions and practices.

“But people now are more active in promoting the literary scene, like this event which I had not witnessed back then. So I am hoping there will be more people who will participate and express their thoughts ways they prefer. Regardless of form, they can discover what can make them more creative. It doesn’t really matter if it’s free verse, videoscape or soundscape. Their choice.”

‘Small Avenue’ was made possible by the collaborative effort of Cambodian poet Yeng Chheangly, So Phina and Brazilian filmmaker Tomyo Costa Ito.

Even if Tomyo knows that creating videos to bridge the limits of poetry won’t be easy, he believes motion pictures will drive people to think more critically and openly.

“My attempt of producing this video is to see the kind of connection images and poems create towards the audience. I believe all the images produce meanings of its own. Like some parts of the film, it doesn’t actually represent the meaning of the poems but it would somehow urge people to picture other images,” shared Tomyo, who also admitted that he is still continuously discovering and learning the Khmer culture. 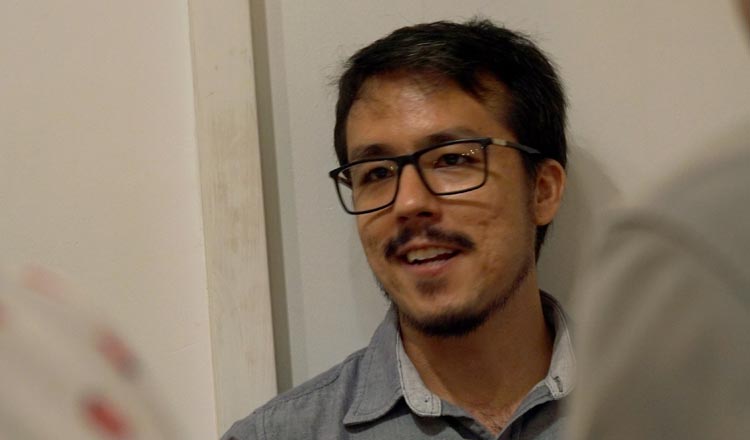 Khmer Collaborative Writers co-founder and a poet himself, Yeng Chheangly, explained that visual poetry is another form of showing the ideas of poets and in turn, stir curiosity among its viewers and listeners.

“This video does not set boundary of poems, yet it gives more images that give more sense to people. And at first we wanted all the five poems as one narrative, yet we finally decided to make it as a one-day event as the session started in the early morning with ‘Turtle’ and ended with ‘Strobe Light’,” said Chheangly.

Visual poetry – as new and strange as it may seem for most in the Kingdom – is aimed to open the hearts and minds of people to the ever evolving art of words.