Home - More pigs killed due to ASF in Ratanakkiri

More pigs killed due to ASF in Ratanakkiri

Agriculture department officials in Ratanakkiri province yesterday said more than 700 pigs in O’Chum district had died or were culled due to an outbreak of African Swine Fever.

The disease, which first struck hundreds of pigs in the province’s O’Yadav district in late March, spread to O’Chum district during the Khmer New Year period.

Soy Sona, provincial agriculture department director, yesterday said that authorities found that some pigs among more than 700 of the animals in O’Chum district had died from ASF, requiring all the others to be culled to prevent the disease from spreading.

“Our officials are monitoring the situation because there are no visible symptom of ASF and the disease can only be detected if sickened animals die,” he said.

Mr Sona noted that despite a ban on the movement of pigs or pork in the province, some people are still transporting pork or pork products to sell in other villages, some of which is used for feeding pigs.

“Because of the extremely hot weather, the pigs find it difficult to forage for food in the area, leading villagers to buy pork products to feed their animals,” he said. “We suspect that the animals fell sick after eating pork derived from infected animals.”

Mr Sona said that it was also possible that the pigs contracted ASF from wild pigs while foraging for food in the forests.

Romas Chvat, from O’Yadav district’s Pok Nhai commune, yesterday said his six pigs and those belonging to other villagers had suddenly died earlier this month.

“We do not know if our pigs died because of the extremely hot weather or if they were infected by ASF,” he said, adding that he had seen the authorities spraying disinfectants to prevent the spread of the disease in other communes but not his. 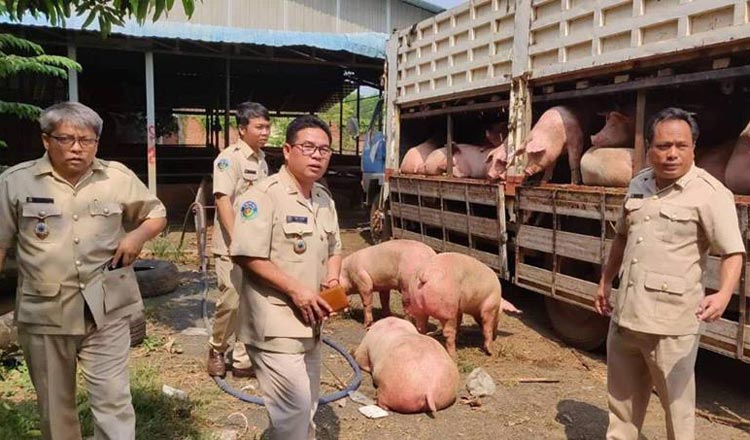 Mr Chvat urged the authorities to also disinfect his commune because the villagers depend on raising pigs to earn incomes.

On April 11, Ratanakkiri Governor Thorng Savun issued a province-wide ban on the transport of pigs, pork and pork products to prevent the spread of ASF.

“The authorities, especially those at the international border entry points, must not allow the movement of pigs, pork or pork products to or from the province until further notice,” he said.

According to a statement from the Agriculture Ministry and the Food and Agriculture Organization, ASF poses no risk to human health, but affects pigs and wild boars.

The statement noted that the virus can survive even after infected animals are killed and processed into meat products.

Currently, there is no effective vaccine or treatment for ASF, so when the pigs are infected, the only measure is to cull the infected animals.

Two jailed three years each over rape of minor