Tire sandals are recognised as innovative footwear and a fashion concept that promotes the concept of recycling. But, in Cambodia, a country overshadowed by an era of ruthless killing by the ultra-Maoist Khmer Rouge, it represents something very different – the symbol of great power held by the Democratic Kampuchea cadres and a flood of painful memories for ordinary Cambodians. Story by Taing Rinith.

On April 17, 1975, the Khmer Rouge marched into Phnom Penh and precipitated a forced mass eviction of city dwellers to the countryside. It was a mammoth forced march at gunpoint that claimed countless lives and led many to a life of forced labour, fear and disease. Death was either from a bullet to the head, beheading, blows from a rifle butt or a machete, or from malaria and dysentery.

Ka Sunbaunat, then a 21-year-old medical student, had to leave Phnom Penh with his family for the province of Kampong Chhnang.

A young man in his prime, Sunbaunat was ordered to work extra hard in the paddy field for the “collective”. His feet were always covered with cuts, bruises and ulcers because he did not have shoes to wear. His only pair of shoes from Phnom Penh was used to barter for food once his family’s stock was exhausted.

Not a single day did he not wish for a pair of sandals made from car tires, also known as Sbek Cherng Kan Lan, which were only worn by the Khmer Rouge cadres, who gave him orders. The sandals were at that time a symbol of power of the Democratic Kampuchean cadres, in addition to the pitch black clothes, Kroma scarves and fountain pens in their pockets.

“Of course, they protected your feet from rocks and thorns, but they would also give you the power back then. In where I lived, only Khmer Rouge cadres and a few respected ‘old people’ could wear them.”

When Sunbaunat recently heard about a young Cambodian man selling the same tire sandals in Phnom Penh, he was eager to contact him and order a few pairs. He could not have them when he was young, and therefore he wanted them now.

Last year, Roem Pheary, 28, quit his job as a journalist for a local media outlet to start his own tire sandal business. He had found a craftsman in Takeo who spealized in making them exactly the same as the ones used during Khmer Rouge era. However, born in the 1990s, Pheary at first did not know of their historical value.

“I thought it was a good business idea because the sandals are made by locals and they are also good for the environment,” Pheary says. 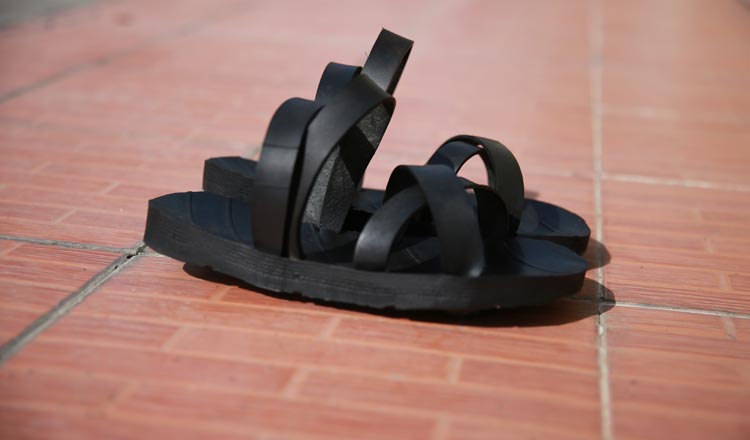 “But, then people were buying them because they are associated with Khmer Rouge. The buyers who are Khmer Rouge survivors say these sandals give them the feeling of nostalgia. So I started to focus on this concept as the centre of my business.”

However, not everyone appreciates the stories behind the footwear. When Pheary took his business online, many people started expressing hatred and anger towards what he was trying to sell because the sandals brought back painful memories as well as reminded them of their relatives and friends who died from forced labour, starvation and disease.

Sambo Manara, a prominent Cambodian historian, says Sbek Cherng Kan Lan is an influence from dep lop, a form of sandal in Vietnam made from recycled tires, also known among American soldiers as Ho Chi Minh sandals, and along with the khan ran scarf, were distinctive clothing of the Viet Cong soldiers.

“The tire sandals are a symbol of communism, resulting from a concept that everything should be simple and classless,” Manara says.

Under Khmer Rouge’s ruling, it was not strange to see abandoned cars with tires and engines missing. The tires were turned into sandals while the engines were melted and forged into daily tools such as spoons and plates, an act Manara calls, “the opposition against capitalism and class struggle.”

“It was ironical that the sandals somehow became a trend that distinguished classes during the time of the Khmer Rouge,” Manara says. 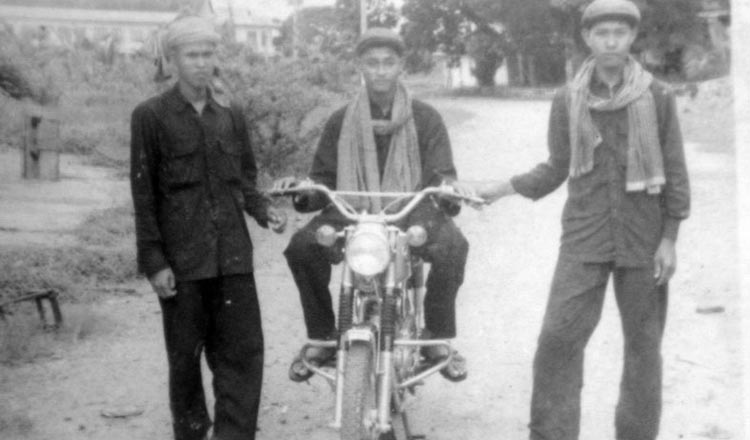 Manara himself received a pair of tire sandals from the leading cadres while working in a mobile unit in Battambang during Khmer Rouge regime. At that time, Manara says, he wore them with great pride.

“Having the sandals for us young people meant that we were contributing to Angka and its revolution,” he says. “I only wore my sandals to the Khmer Rouge’s ceremonies such as the celebration of the anniversary of their victory over Lon Nol’s government.”

“However, many others exchanged them for food or medicine. Undoubtedly, though these sandals were made from discarded used rubber tires they were in fact worth much more than an actual car.” 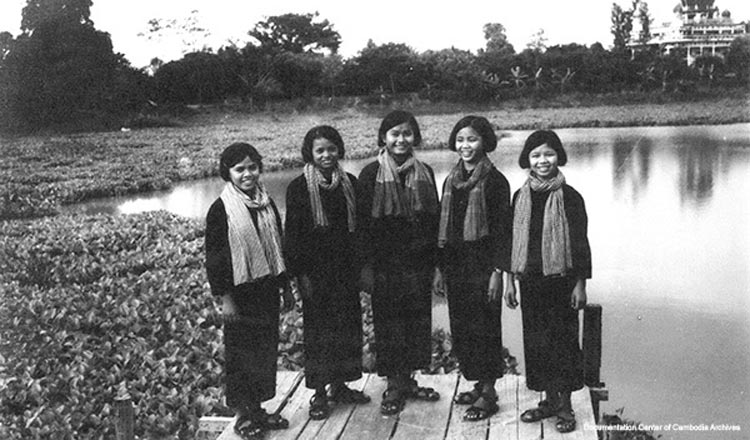 Pheary, the tire sandals seller, says he plans to display his products at the genocide museums such as Toul Sleng and Cheung Ek. On the other hand, Sunbaunat the scholar says he wants to invest in Pheary’s business so that the sandals could be sold or given to more people.

“I want to make a lot of these sandals and gave them to young people I know to allow them to understand life during the Khmer Rouge and to appreciate what they have right now,” he says. “Yes, they may be just sandals, but they are sandals with a history.”