What’s great about living in a big city such as Phnom Penh is the fact that you’ll never run out of choices – clothing, cafes, bars and clubs, natural parks, hotels and of course, food. We see big and small restaurants offering local and foreign delicacies sprouting just about anywhere. If you’re craving for a Japanese barbecue, you can easily spot some good shops in Boeng Keng Kang. If you’re aiming to get your favourite dumplings, you won’t have a hard time locating Chinese restaurants.

But two weeks ago, I had a different craving; something I have always wanted to eat but have never really tried. YES, FILIPINO FOOD! I was curious about what “Lutong Pinoy” (Filipino food) tastes and if it’s similar to what we have here in Cambodia.

I spotted a newly opened restaurant in Toul Tom Pong and finally decided to give in to my cravings.

D’ Garden Asian Cuisine and Restobar is an open-air restaurant that sits in the corner of Streets 430 and 470. Rows of tables and chairs are neatly arranged under the shade of a big mango tree, with several potted plants adding to its calm vibe. 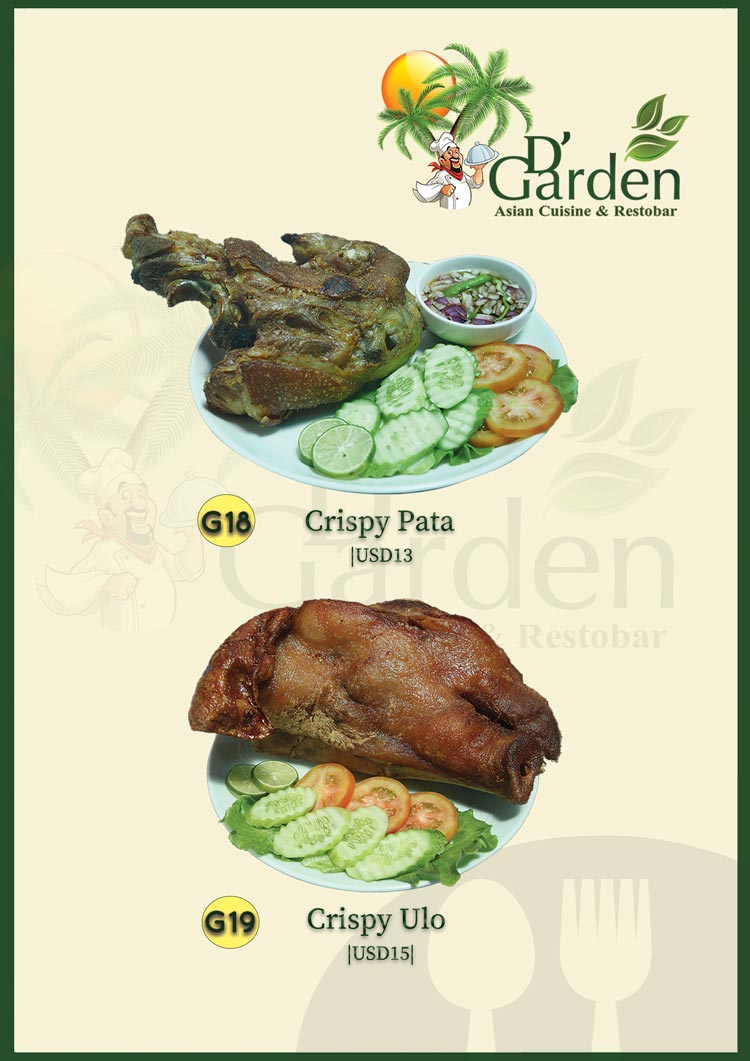 With the coziness of the place, the goodness of the food they served didn’t come as a surprise.

I was lucky to have tasted the Steamed Mackerel even before it was written in the restaurant’s menu. The fish came with tomatoes, green lettuce, cucumbers and a cup of hot steamed rice. The mackerel meat was so tender, sweet and rich in flavour. Because the meat is steamed in low temperature for an hour, it’s so tender that you can eat even the fish bone – I’m not kidding. 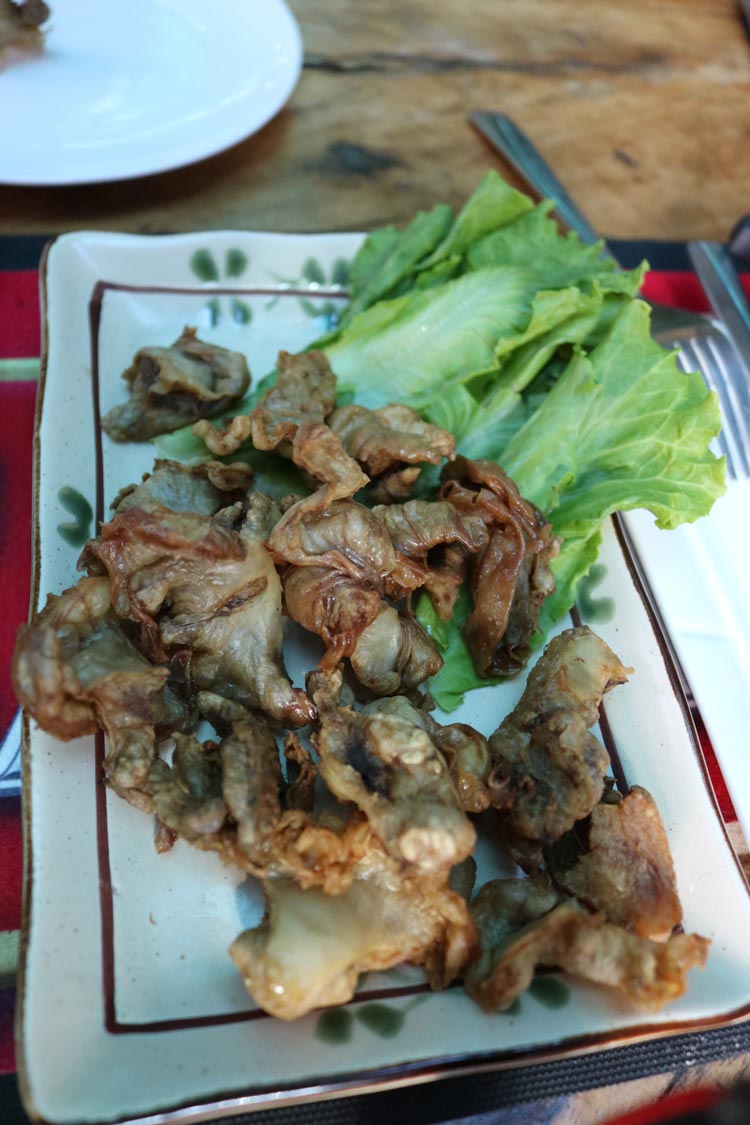 The Crispy Pata and the Crispy Ulo, meanwhile, were an unexpected delight. I’ve never eaten a pig’s leg and head before, but I didn’t hesitate when the two plates were given to me. These fabulous food consist of a large deep fried pig head, trotters and intestines, which, according to the cook, were cleaned properly and boiled before they were marinated with salt and pepper. They were cooked in medium temperature to ensure that the meat inside is well cooked.

The Crispy Pata and Crispy Ulo were served with soy-vinegar dip with lemon, garlic salt and pepper. The interesting formula of cooking made the meat so crispy and crunchy. 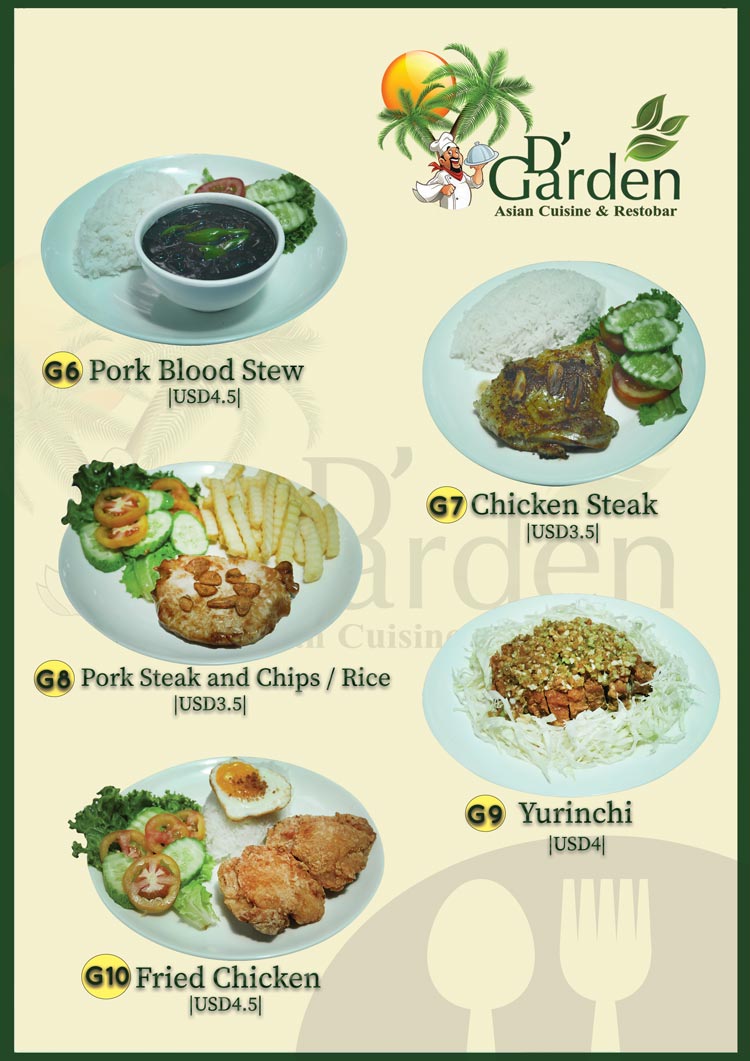 With these special offers, I was able to taste “Lutong Pinoy” without going to the Philippines. The Filipino hospitality was also very evident inside D’ Garden Asian Cuisine and Restobar as the owner and chef personally served my orders.

Another great thing about the restaurant – aside from its superbly delicious food – is its flexibility to cater to different customers. The restobar has an elegant mini bar that serves all types of drinks. It also has a billiard table and a dart board for those who want to play a little after a sumptuous dinner.

A day with a storyteller