Home - It all starts with the jams

It all starts with the jams

It’s a familiar enough story: girl meets country, girl falls in love with country, girl has musical experiences, girl has to leave because her internship has ended, girl vows to return to country. The coda: girl returns for another internship, and then all good things come to an end – or at least a pause. One of those musical experiences was the creation of Boogie Noir: French cellist Cecile Lacharme meets LA backstreets rock’n’roller Brian ‘Brin’ Wood to create an unusual but compelling sound.

The unlikely duo met in Siem Reap in 2017. Brin had already been in Cambodia for several years at that point. “I was living in Thailand. I came here as a tourist, to do a visa run,” he explains. “And then I was upset that I already had a return ticket. In six months I was living here.”

The much younger Cecile came via Singapore, where she was doing an internship as part of her cultural management studies. “I wanted something more Asian, because Singapore is really international, and really clean – too clean to be Asia,” she says. Her search for something more traditional brought her to Cambodian Living Arts. “I got an interview and I came to Siem Reap. I asked before if I should bring a cello from Singapore, if I could not find one [in Cambodia] – I had no idea. No, bring your cello, they said,” she laughs. 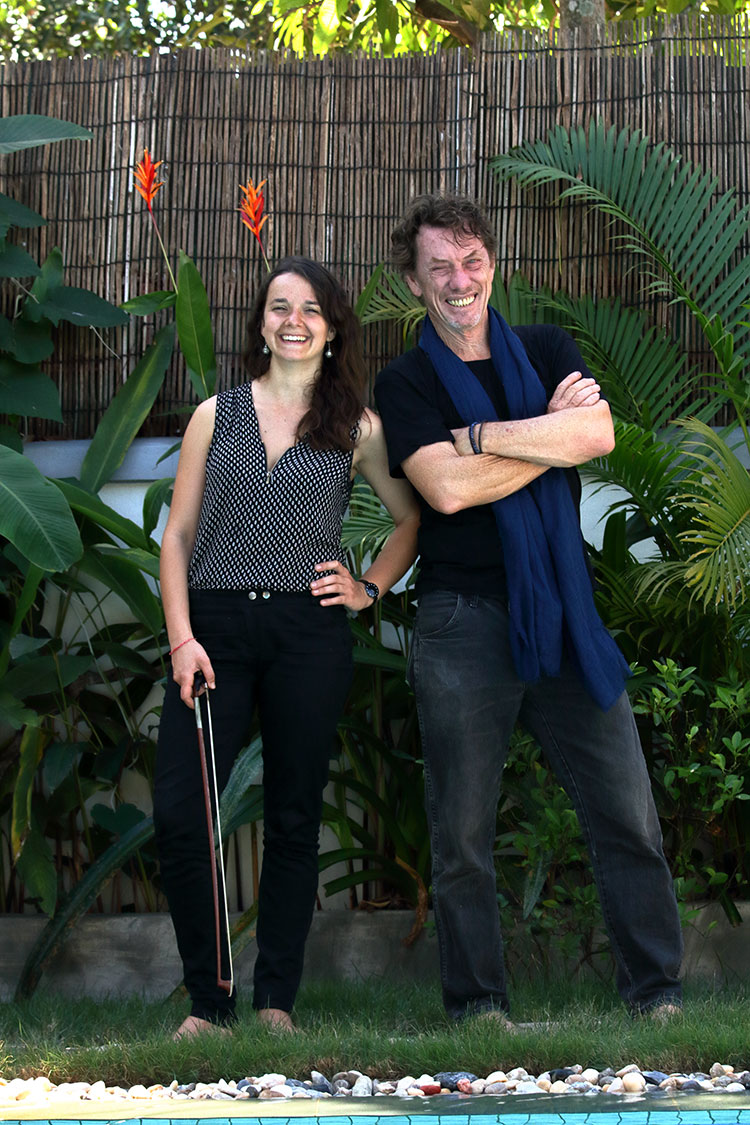 “When we met she said she’d only been here an hour,” Mr Brin recalls. “She came to The Laundry Bar where friends were playing, and we started talking. I asked her: what kind of artist are you? She said, oh, I play the cello. Did you bring one with you? And she said of course! And I went – wow. Anybody that travels with a cello, I mean, it ain’t no ukulele, baby.”

Jamming was the way forward. Ms Cecile had already rejected the idea of a professional classical music career path, finding jazz manouche improvisations on the banks of the Seine a much more satisfying approach. “You are a musician, you use your ears and you just adapt. And since I did it for two years in Paris, and then Singapore, I’m used to going to jam sessions. If there is room for a solo, I take a solo, and otherwise I just do drone notes, or sometimes crazy stuff, and adapt.”

For Mr Brin, the meeting sparked off a return to performance after two decades out of the scene. Inspired as a child by attending classical concerts with his grandmother, and then the advent of The Beatles, he made a life in music for many years.

“All through high school I had bands. I played until I was about 35, 36, and then I had five kids at home and a new baby on the way, I looked at my band, and the band was a mess. We were making it, but we were a wreck. So I looked around and said ‘I quit’. We were The Boogiemen, but I was the Boogieman, so I was the tip of the spear, taking the blame.” As for many barang ex-musicians arriving in Cambodia, a musical life may be conjured out of almost nothing. “I had sat in and jammed, but hadn’t done a proper anything in over 20 years. I met Cecile, and we jammed at The Harbour, and we had a great time – and we got hired that night.”

The chemistry worked immediately. “I’m listening a lot,” Ms Cecile says. “During the verses sometimes I play, or pick, like bass, or just play long notes, creating harmonies. And then some soloing. But we find our balance really easily, for sure. And the connection was really there from the beginning.”

After the Cambodian Living Arts internship ended, Ms Cecile returned to her studies in Nantes, but with a plan; she had already met and started performing with Siem Reap’s dazzling contemporary dance company. “I already talked to New Cambodian Artists: I want to come to work with you, because of what you do, you are striving for excellence, you try to give to Cambodia a culture of high quality contemporary art. And we improvised together, we worked together, and I could see it will happen. So I say I will be back in one year, don’t worry.”

Back she came. “When I came to Cambodia I understood I couldn’t just come for only one time. I completely fell in love with this country. And I met so many beautiful Khmer artists.” Now, at the completion of another successful sojourn, Ms Cecile will bid another temporary farewell to Siem Reap at the end of this month. “Maybe one day I will stay in Cambodia,” she says.

“They’re waiting for her in Nantes,” adds Mr Brin. And indeed there is already a gig booked for Boogie Noir in that city in June.

Boogie Noir will have a final Phnom Penh gig at Chinese House tomorrow, April 24, and in Siem Reap the following weekend at Experimental and The Harbour.

Japan struggles with English-language signs ahead of 2020 Olympics