Government advisor slams US over coup

Raoul Marc Jennar, diplomatic advisor to Foreign Affairs Minister Prak Sokhonn, yesterday slammed the United States for denying its alleged involvement in the ousting of then Prince Norodom Sihanouk as the Kingdom’s head of state and renewed a call for the cancelling of Cambodia’s $500 million war debt with the US accumulated during Marshal Lon Nol’s regime.

Mr Marc Jennar made the call during a press briefing at the ministry in Phnom Penh, where he said the US should cancel the debt because it was responsible for the deaths of Cambodians during the Vietnam War.

He noted that the US government can no longer deny its involvement in the ousting of Prince Sihanouk while he was in Moscow.

“We know very well that [the US] decided to find and provide ammunition to the Khmer Serey, a group based in South Vietnam and in Thailand who were fighting against Sihanouk,” Mr Marc Jennar said. “They [Khmer Serey] received money, arms and ammunition from the US.”

“The two attempts to overthrow Prince Sihanouk by Dap Chhuon, In Tam and Sam Sary was organised by the CIA station in Saigon,” he added. “They attempted to kill Sihanouk – and the boom was felt at the Royal Palace. It was organised by Sam Sary, father of Sam Rainsy.”

Mr Marc Jennar said the US lied about its involvement in the Cambodian civil war that ensued.

“They denied at the time and they still deny their involvement in the March 18, 1970 coup, even though we have a lot of proof,” he said.

Mr Marc Jennar noted that the ousting of Prince Sihanouk began with a large-scale anti-Vietnamese demonstration in Phnom Penh. He said some of the protestors were from South Vietnam, a US ally at the time.

“It’s clear that even though the order did not come from the White House, the intelligence community…and the American army at least in the Pacific were all in favour [to overthrow Sihanouk] for many years,” Mr Marc Jennar said. “There are no reasons to doubt about the responsibility of the US in the coup….We can say that if there was no coup, there would be no war and there would be no Khmer Rouge.”

However, in February the embassy denied that the US was ever involved in a coup in Cambodia, and instead accused China of supporting Pol Pot’s brutal Khmer Rouge regime.

“There is no substantiated evidence that the US was involved in a coup, which brought Lon Nol to power,” it said.

When asked about the embassy statement, Mr Marc Jennar said he was not surprised by the denial.

He said if there was no green light from the US government, the embassy in Cambodia will continue to deny the truth. 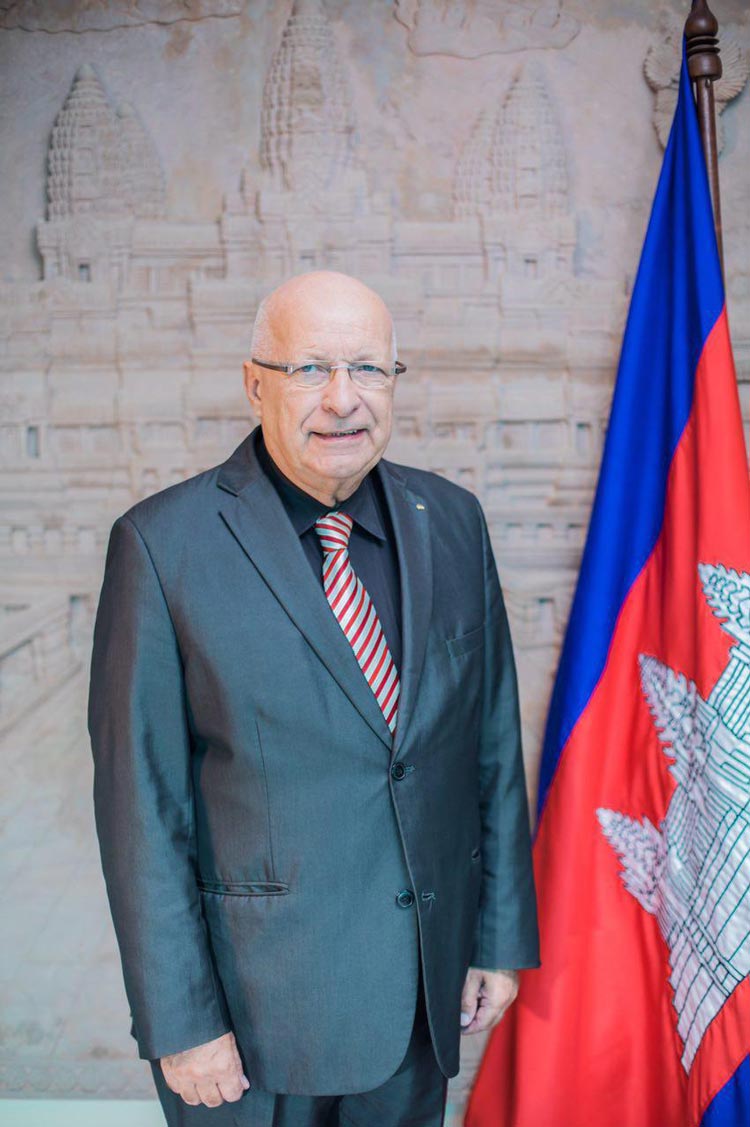 “They lie because they did not receive a green light to tell the truth from Washington,” Mr Marc Jennar said.

He then called on the US to cancel Cambodia’s $500 million war debt.

“It is shameful and immoral for the US,” Mr Marc Jennar said. “We know of their involvement in the coup. We know about their support for the Lon Nol government.”

“They destroyed the country – they poisoned people in Svay Rieng, Ratanakkiri, Mondulkiri and Prey Veng provinces with Agent Orange; it is shameful,” he added.

Regarding Cambodia’s relationship with China, Mr Marc Jennar said China is not becoming a dominating force in the Kingdom.

“Norodom Sihanouk used to say the country has no friends, only interests – that is the real world,” he said. “So don’t ask Cambodia to do more than others, don’t ask Cambodia to sign the statement against China when we’ve received so much from China. We have new roads, new railway and more equipment.”

Mr Marc Jennar added that Cambodia needs foreign investments because the government only thinks of sovereignty.

“We welcome investments – we welcome the cooperation from China, but it does not mean we put our land, our act in the same basket,” he said. “We would like to have more from Japan, South Korea, Europe and the US.”

Khmer Republic Party president Lon Rith, son of Marshal Nol, told Khmer Times that the removal of Prince Sihanouk was a parliamentary decision, not a coup.

“It was not [my father’s] decision, it was the decision of the National Assembly and the Cambodian people,” Mr Rith said. “They were no longer confident in Prince Sihanouk.”

On Friday, April 12, the Khmer Times published an article that does not reflect the content of the meeting held in my office with some journalists (“Government advisor slams US over coup”). This article expresses my personal opinion about the US involvement in the 1970 coup. This was not the purpose of the meeting where I spoke exclusively in my personal capacity. My intention was to share my personal impressions as I celebrate thirty years of engagement with Cambodia.

I arrived in Cambodia on April 12, 1989 and stayed there for six weeks. I met Samdech Hun Sen on April 19th for an interview of more than two hours.

During the meeting with journalists on April 11, I shared my impressions of my stay and my meeting with Mr. Hun Sen. I said the immense shame I felt when I came from a rich country in Europe and that this country supported the UN embargo and the presence of a Khmer Rouge ambassador, while my country inflicted great suffering on a people of survivors. I have explained at length that this shame has motivated my engagement with Cambodia for thirty years. None of this appears in the Khmer Times article.

I also described at length the very strong impression left on me by Mr. Hun Sen. I thought I would meet a Communist leader like those we knew at that time in Eastern Europe and I discovered a lucid man about the deadlocks of the state economy, a man pragmatic about the realities of international relations and the possibilities of to come out of the drama in which foreign interference had plunged the country. I described at length the personality of a man and his political vision I perceived. None of this appears in the Khmer Times article.

Answering a question, I also explained why the policy of the government seems to me most in line with the interests of the country and I recalled that Cambodia does not want to have any conflict with foreign countries, that it wishes to have the best relations with all the states of the world, including those of Europe and the USA, in spite of the temporary difficulties of the moment. I recalled the still relevant formula of the Sangkum era: “we want to have 1000 friends and no enemies”. None of this is reproduced in the Khmer Times article.

The article deals only with my personal opinion as historian on the events of March 18, 1970, following a question asked when the interview had already been ended. You will agree that this is a very short and very partial account of what I said. Which justifies the present clarification.