Home - All hail the ‘hearing hero’

All hail the ‘hearing hero’

A thousand miles away from home, Prof. Dato’ Dr. Lokman Saim had set up the Kingdom’s first and only hearing care center, with the sole aim of bettering the services for hearing-impaired Cambodians. Anith Adilah Othman sits with Dr. Lokman to learn more about the man behind the center, which offers a variety of services including ear check-up, hearing screening, consultations, audiometry, tympanometry and rehabilitation programmes.

In his extensive clinical career, the renowned ear, nose and throat (ENT) specialist has been involved in various projects worldwide, since delving into Otology (the study of hearing-related diseases, diagnosis and treatment) and Neuro-otology (the study of neurological disorders of the ear) at Harvard Medical School in 1994.

“In the early 1990s, there were not that many ENT surgeons specialising in ear surgery. My interest grew because I am fascinated by ear as an organ and the role it plays in hearing. And hearing is extremely vital in human development.

“Without it, humans can’t possibly communicate or develop speech. That was when I became very focused in ear surgery and hearing rehabilitation,” he told Good Times2 in an exclusive interview recently. 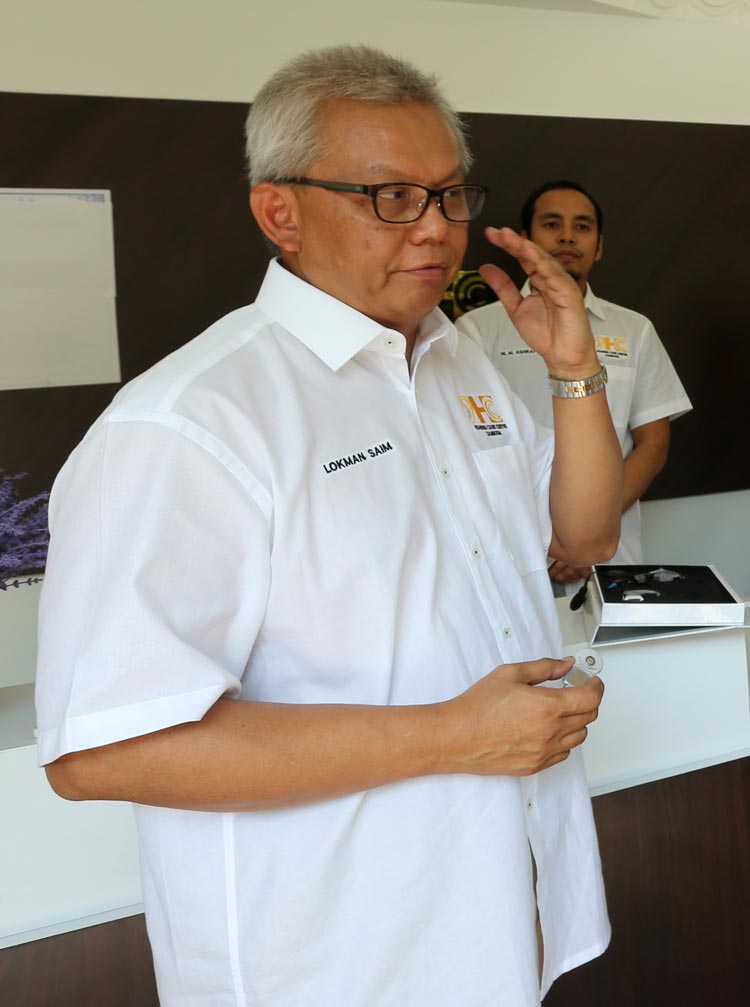 Upon his return to Malaysia a year later, he helped established the region’s first audiology and speech therapy training department at the University Kebangsaan Malaysia. Thanks to his contributions, the training programme gradually expanded to three other universities, leading Malaysia to have the highest number of audiologists and speech therapists in Southeast Asia.

Over the years, he has also had vast experience in teaching and training other surgeons across the world, including in Indonesia, Vietnam, Brunei, the Philippines and Pakistan.

“I guess my family has always comprised of teachers, like my parents and a handful of my aunts. Therefore, teaching has always been a part of me. I believe that we should educate and train the next generations so the overall progress of the field will be a continuous process,” he said.

While possessing a stellar portfolio as a clinician, Dr. Lokman is more than just your average surgeon. In fact, he calls himself a ‘three-in-one’ man. Aside from being an ear surgeon, he is also a researcher and the Vice Chancellor and Dean for the School of Medicine at one of Malaysia’s leading private university.

As a well-articulated man with calm demeanours, Dr. Lokman’s strong passion for the field of medicine is evident when he discusses his aspirations in length, especially for Cambodia.

“In Cambodia, the doctors have strong desire to catch up with the rest of the world, in terms of disease management. For instance, the ENT doctors here know about latest procedures involving cochlear implants but they lack hearing test facilities. Without such support service, you cannot possibly have a wholesome ENT practice. This is when the hearing care center comes into the picture,” he said.

If there is a word that could describe a conversation with Dr. Lokman, it would be ‘inspiring’. Therefore, it comes as no surprise when all five of his children also decided to dabble in the field of medicine.

His eldest daughter, Dr. Farah, is on her way to become an ENT surgeon, his second son, Dr. Lutfi is the man behind non-profit medical organisation Hospital Beyond Boundaries and is currently doing his doctorate at Harvard Medical School, his third and fourth daughters, Dr. Fatin and Dr. Farhana are about to undergo their internships while his youngest son Fairuz is pursuing dentistry at Universiti Kebangsaan Malaysia.

“My wife and I never did force them or imposed on them to get into the field, but somehow they grew interested and we are very supportive of that,” he said.

“The only thing my wife had always told them, jokingly of course, is to never follow her footsteps and become a pharmacist,” Dr. Lokman said, prompting laughters from his wife who was also present.

Having a similar interest, he admitted, has helped forged a stronger bond between himself and his family of seven.

“Somehow when everybody is in the same field, every family occasion feels different. Whether holidays, dinners or social functions, medicine-related topics would come up and none of us would feel alienated. People will say it is boring but if anything, it strengthens our bond,” he said, laughingly.

When asked about the most rewarding aspect of his career, his answer is simple: seeing his patients gaining the sense of hearing and being able to develop speech again.

“Many a times I fly in, meet the patient pre-operation, perform a three-hour surgery, check on them at the post-operation ward and then fly back home. I don’t get to see them anymore until, say, my next visit to the hospital or during conferences where we discuss positive surgery outcomes.

“There was once I saw a child who is able to speak and hear very well and the medical team told me it was a result of a surgery I performed 5 years ago. It is one of the most rewarding feelings ever,” he said.

Should I stay or should I go?