Mr Chanthol, who is also vice chairman of the National Road Safety Committee, made the call during a meeting on road safety at the Interior Ministry in Phnom Penh.

Mr Chanthol said the municipal public works and transport department found that the majority of tuk-tuk and rickshaw drivers in the capital lack training on traffic laws and a driver’s license.

“Among about 20,000 drivers in Phnom Penh, 98 percent of them were driving without a license,” he said. “The law says they must have a license.”

“I asked for permission from Interior Minister Sar Kheng to allow the ministry’s general department of public works to work with the municipal public works and transport department to conduct special training,” Mr Chanthol added. “We will give the drivers three months to attend training before they acquire a driver’s license.”

Mr Chanthol said any driver who refuses or attends the training half-heartedly must face legal action. 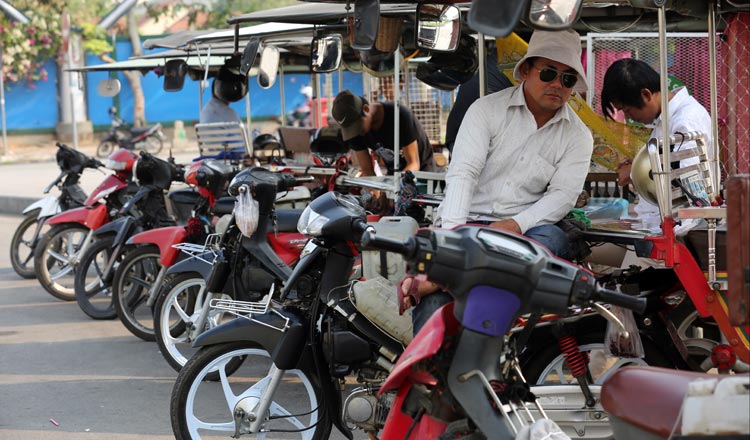 “We will help to train them and they can take a driver’s license exam within three months,” he said. “If they fail to do so, then we would take legal action because right now they are causing traffic jams in the city by not knowing when to heed traffic signs.”

Mr Kheng yesterday expressed his support by calling on the authorities to pay close attention to what causes traffic accidents.

“I am interested in the issue and we are committed to successfully do this job,” he said. “Minister Sun Chanthol has highlighted the issue and I wish to support what he said.”

Mr Kheng additionally urged his officials to conduct a drug test on those who have obtained a license to ensure that there are no addicts driving tuk-tuks and rickshaws.

He noted that sub-national authorities should gather motorists twice a month in order to disseminate traffic laws and educate the drivers.

“As we are strengthening traffic law enforcement, I call on our traffic police officers to please avoid taking bribes from people,” Mr Kheng said.

He added that the Education Ministry should also help to disseminate traffic laws through lessons taught in schools and private companies such as garment factories.

“The Education Ministry should also consider contributing time to teach people about traffic laws in schools,” Mr Kheng said. “Hours should be increased to 30 per year because we currently only do 15 hours.”

Some drivers on streets in Phnom Penh yesterday said that they support the government’s initiative to make the roads safer.

Sin Bech, a driver for raid-hailing app PassApp, said yesterday that he wants to be trained, but does not have the time.

“I am supportive of this idea, but I need to consider this because it will take a lot of time,” Mr Bech said.

“I will register to be trained after Khmer New Year,” Mr Sokha said. “I think it’s great because currently we only learn about traffic laws from our friends.”

“After the training, we will no longer be afraid of police stopping us because we would have a license then,” he added.

According to a National Road Safety Committee report yesterday, 1,076 traffic accidents occurred across the Kingdom during the first three months of this year. It noted that the accidents resulted in 513 deaths and 1,592 people injured.

“In Phnom Penh, 91 people died, while 39 died in Kampong Speu province and 32 died in Preah Sihanouk province,” the report said. “If compared to the same period last year, then the number of accidents has increased 31 percent.”

It noted that accidents occurred primarily because of road rule violations, recklessness and drunk driving.