After weeks of intense competition, Miss Universe Cambodia 2019 finally found its rightful winner, the woman who will bear the country’s flag and compete for the crown in the world’s most prestigious international beauty pageant this year, writes Taing Rinith.

The NABA Theatre at Naga 2, was filled with hundreds of people on March 31. Holding up big photos and numbers of their favourite candidates, spectators were all excited and ecstatic to cheer. It was the Grand Coronation of Miss Universe Cambodia 2019, that one night when one of the 25 beautiful ladies brought home the crown and started her once-in-a-lifetime journey to be our flag-bearer in the Miss Universe 2019 pageant.

The evening started with an Apsara dance, followed by an electrifying performance by all the candidates along with Rern Nat, the previous year’s winner. They were dancing to ‘The Beauty of Cambodia’, a song especially composed for the event, and sang by Meas Soksorphea, one of the country’s top artists.

The next three hours of the event was dominated by modelling competitions. The candidates had to catwalk on the stage, showing off their natural beauty and grace, in different frocks, including evening gown and traditional robes. The competition also involved the candidates proving their knowledge by answering difficult open-ended questions within limited time. At the final hour, only five finalists survived the tough competition.

And just before the clock struck 12, the crowd inside NABA Theatre erupted in cheers as hosts announced the four runners-up and the new Miss Universe Cambodia – all of whom will be representing the Kingdom in different international pageants in the coming months.

The top two candidates – Somnang Alyna, an 18-year-old candidate from Phnom Penh, and Thoung Mala from Kandal province – held hands as they nervously waited for the final announcement. 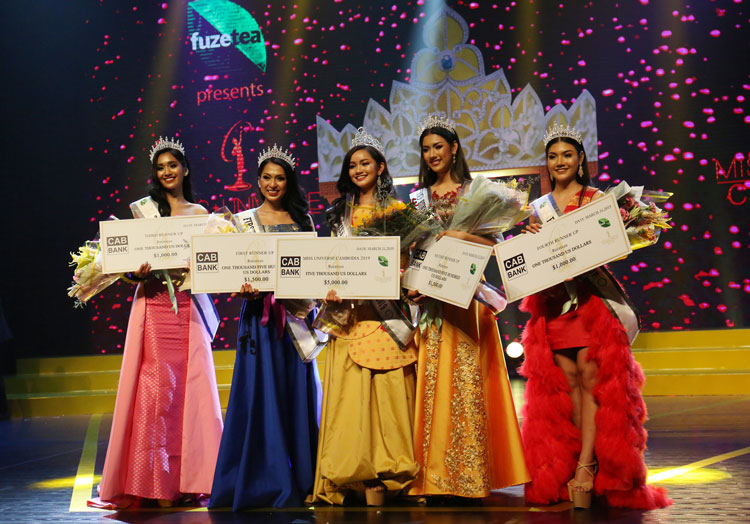 Ms Alyna hugged first runner-up Thoung Mala before she broke down in tears on the center stage.

The crowd gave loud cheers and chants to the newly crowned queen. Ms Alyna has triumphantly completed her journey of beauty, glamour and brains – in the national level. But the moment Miss Universe Cambodia 2018 Rern Nat put the silver crown on Ms Alyna’s head, the latter officially started another journey – much bigger and much tougher this time.

Ms Alyana will be representing the Kingdom of Cambodia in the 68th Miss Universe pageant in South Korea this year. She will be the third woman to do so after Ms Sotheary By and Ms Rern Nat.

Will she be the first ever Khmer woman to bring home the Miss Universe sash and crown?