In Banan district, hundreds of farmers are struggling to survive as their crops are being destroyed due to a lack of water. Desperate, they are calling on the government to come to their aid as the Ministry of Rural Development today celebrates World Water Day.

Banan district, Battambang province – Has Sarath stands on a bank of a pond in Slap Pang village here that villagers used to utilise as one of their main sources of water.

The pond, which was dug by a Japanese organisation years ago, is now almost dry.

“There is a serious shortage of water this year, there has been no rain since the end of October,” Mr Sarath says. “This pond is almost dry and the water is not enough to sustain villagers because of the extremely hot weather.”

The 63-year-old farmer says weather conditions this year are much hotter than previous years, and rice crops are almost completely damaged.

“This year is more difficult than last year, there is no rain. It causes damage to rice crops,” Mr Sarath says. “We tried to pump water into the canal near the village, but we can’t manage it.”

“Because of this, one hectare of crops cannot even yield one sack of rice,” he adds. “For some people, their six hectares of rice fields were completely damaged. It’s too hot – the soil cracks and cattle cannot find grass to eat. We are facing more difficulties this year.”

Mr Sarath says his two sons had to find work in Thailand in order to help support the family.

He is now calling on the government for assistance.

“I would like to ask the government to help farmers in the agriculture sector here,” Mr Sarath says. “We want them to help develop the water canal system for us.”

Tim Ty, a 21-year-old villager from Ta Kream commune, is using a tractor to transport 20 buckets of water for his family.

Mr Ty says villagers need to travel four to five kilometres away from where they live in order to retrieve water from a pond.

“I have to travel to retrieve water for daily use every three to four days because the canal near our house has completely dried,” he says. “We do not have money to dig a well. We have to depend on transporting water from the pond, but the pond is now almost dry, too.”

“I would like to ask the authorities to please help by digging more ponds. This one has been used by too many villages,” Mr Ty says. “Or please provide water pumps for villagers because people here are poor and do not have enough money to dig a well.”

In order to help conserve water, the government in January issued a statement appealing to farmers to refrain from planting rice during the dry season this year.

Dy Chamroeun, a 28-year-old vendor from Banan district’s Snoeng commune, says that despite the appeal by the government, some farmers are still planting rice.

“Some people still cultivate rice during the dry season, but most become damaged,” Ms Chamroeun says. “Others who cultivate rice three times a year make it difficult for those who are already lacking water for use.”

“My relatives in Moung Russei district do not have enough water to use,” she adds. “Sometimes they have to take water from another area, which is very difficult.”

Ms Chamroeun says the closest source of water is located near the Kamping Puoy reservoir, but despite having this source, villagers do not have enough to water their crops.

“Now we have a clean water network to use, but when it’s hot, we do not know whether there will be enough water for us to use,” she says. “I am deeply concerned about this.”

Mr Yeap says villagers are forced to buy water at $10 per 300 litres.

“We can use the water for about five days, we can use it for up to a week if we are careful with the usage,” he says.

Long Phalkun, director of the provincial water resources and meteorology department, says the ministry and local authorities have been trying their best to solve the problem.

“In general, we have provided solutions by bringing water to areas with shortages through our existing irrigation systems by using machines to dig and expand waterways. If the water is not reachable, then we will use pumps to retrieve water,” Mr Phalkun says.

He says for areas far away from a source of water or for those which do not have one, authorities will transport water to those in need.

“According to the ministry’s forecast, Cambodia will face extremely hot weather in April and May,” Mr Phalkun says. “We have already prepared pumps, machines and trucks to be deployed to areas in need of water.”

According to a statement by the Water Resources and Meteorology Ministry published on March 12, El Nino will continue to affect parts of Cambodia.

The statement says Cambodia will experience temperatures as high as 38 degrees Celsius.

“But in April and May, the weather will be extremely hot, and sometimes it will reach 40-42 degrees Celsius, especially in the northwestern lowlands and the northern plains,” it says.

It notes that rainy season is expected to start in the third week of May, but with little rainfall. Average to moderate level of rain is only expected in the beginning of June.

The month of March has seen occasional rainfall in Phnom Penh and in other parts of the country.

Regarding the shortage of water for daily use, Prime Minister Hun Sen on Monday called on ministry and local officials to continue to address the problem, despite the occasional rain in the past few days.

“There’s been not much rain, so I would like to appeal to people to conserve water in order to resolve the water shortages,” Mr Hun Sen said.

“So this year, the authorities will need to dig wells rather than transport water from long distances,” he added. “Although wells accessing groundwater will need to be deep, it is a good way to access water.”

Mr Hun Sen said water trucks should only be deployed to those who cannot dig wells.

“We have to work hard to solve this problem. There are some places with no groundwater for a well, so we have to transport water to those places,” he said. “If there is groundwater then we have to dig a well.”

Mr Hun Sen noted that farmers in affected areas should refrain from cultivating rice until the rain season arrives.

Keo Vy, spokesman for the National Committee for Disaster Management, says the shortage of water from January until Sunday destroyed 30,000 hectares of rice crops in several provinces, including Battambang.

In 2016, the Kingdom experienced a drought due to a lack of water, prompting the government at the time to distribute water to people.

“Overall, the lack of water for daily use this year is not as bad as 2016 because this year the shortage of water is only occurring in some areas,” he says. “We timely intervene in those areas.” 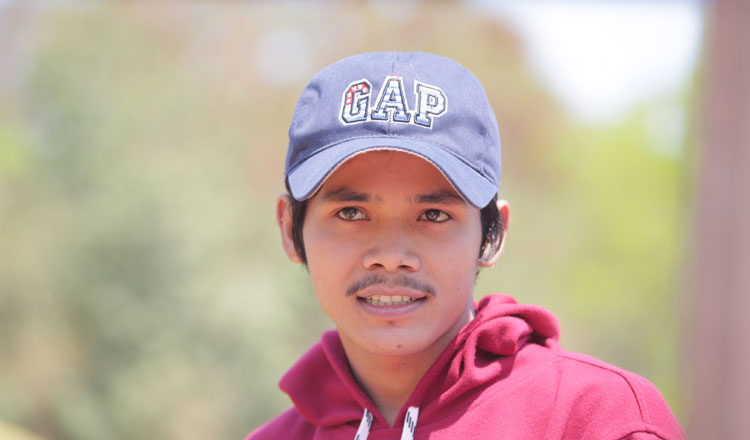 “The lack of water for daily use for people is a common concern,” Mr Samrin says. “There needs to be a joint resolution by the National Assembly, the government and local authorities.”

“In a worst case scenario, water quality can also become problematic, affecting farmers’ health, mainly through waterborne disease like diarrhea,” he says. “Also, farmers might face prolonged dry spells or consecutive no-rain days during the rainy season. This will mean there would be direct impact on plant growth, affecting its productivity.”

“Small reservoirs or natural ponds are always very helpful for local farmers to mitigate drought impacts, especially water shortage,” he adds. “They should be encouraged to build a small reservoir in their local area to store rain water before the end of each rainy season for the next dry season.”

Back in Ta Kream commune, Mr Sarath says he is afraid the pond used by villagers will run out of water by April due to a lack of rain.

“If this pond becomes dry, we won’t know where to find water to use because there is no well here – nor other sources of water,” he says. “We only ask that the government, local authorities and organisations pay more attention to helping people in areas affected by water shortages.”

Cambodian-Japanese Friendship bridge to be re-opened next month

Drug-using officers to be fired