This year marks the 39th year in which the Riel currency was reintroduced in Cambodia. Since its reintroduction, Cambodia has witnessed many significant changes, including a strong, new technology advancement, as well as young entrepreneurship.

One of the major milestones happened in 2008 was the introduction of digital services – which influenced various sectors, including the way people exchanged money. This meant that cash movement was about to change – instead of handing the cash to anyone, there was an option of sending the money to an individual via mobile phone without the need for a long bus journey or individual travelling to a destination.

The very first company to herald this change was Wing (Cambodia) Limited Specialised Bank. Wing was established with the aim of converting the way people exchange either Riel or USD currency in a very convenient and affordable way via the vast footprint of its agents nationwide.

This major transformation meant that the movement of the Riel currency was digitized, mainly given to high percentage of mobile phone penetration, rapid expansion of the telco network, and the continuous deployment of the national backbone network in the country. Wing has been instrumental in contributing to the Cambodian economy by formalizing the way of sending the Riel currency, from a traditional to a digital manner. These numbers are expecting to grow year on year.

In 2018, almost 50% of Wing’s transactions were carried out in Riel currency – a 40% growth over the previous year.

The inspiration behind providing options of mobile payment in Riel did not stop here – Wing always prioritizes the Riel currency as the major point in each and every of our local communications. Whether it is the service fee, the receipt issued for utilities payment, purchase at one of the 30,000 merchants nationwide via WingPay, or receiving international remittance from over 200+ countries, Wing makes sure the customers can choose to pay for those services in Riel currency. 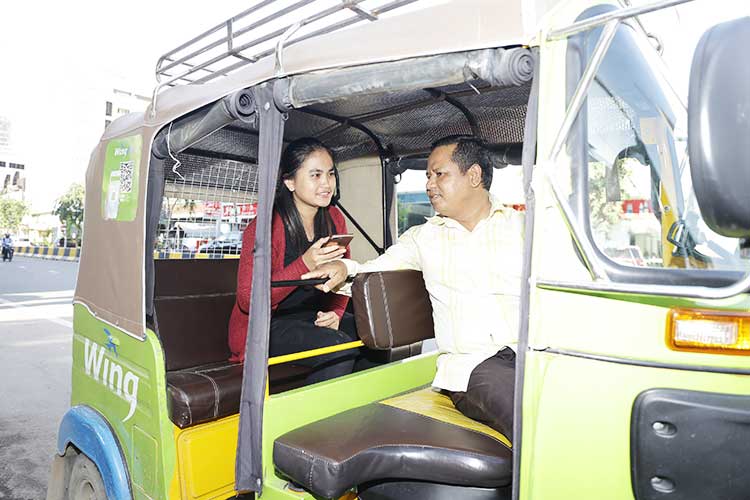 The Riel currency is also within Wing’s DNA – the bank makes sure customers, 75% of whom are unbanked, get access to financial services, through the availability of the Riel currency within the Wing Money Mobile app.

Currently, every fourth Wing customer selects the Riel currency account, ranging from Tuk Tuk drivers, small business owners, factory workers, and many others. These groups of people have been fundamental in contributing to strengthening the Riel currency digitally via using the Wing platform for their business or day to day living. It is due to this support and adoption that Wing’s total Riel transaction values continue increasing.

In addition, Wing has helped thousands of local entrepreneurs, who have been facing challenges in preparing the small Riel changes for the customers who flock into their businesses. With WingPay merchant account in Riel currency, Wing customers will receive the payment in real-time, without having to worry about fake currency, preparing small changes, or counting cash daily at the end of business hour.

With a WingPay merchant account in Riel currency, customers of Wing have instant access to digital reports of their income, providing a more convenient way of managing their finances – all of these can be tracked via Wing Money app, available also in Riel currency.

These are just some of many examples on how Wing is building an ecosystem of cashless payments with the focus on the Riel currency. An increase of Wing accounts as well as transactions in Riel have provided a clear message that there are many opportunities to promote the usage of the Riel currency in a way that is well suited to the vision of digital economy and cashless society, expecting to be achieved by 2023 as claimed by the Royal Government of Cambodia.

Wing would also like to take this opportunity to congratulate the National Bank of Cambodia on the 39th Anniversary of the introduction of the Riel. As a leading mobile financial services provider, as well as the award winner for the best digital innovation organisation of the year 2019, Wing will always ensure that all our customers from a student, a worker, an entrepreneur, or a large corporate organization will be able to send money, pay for goods and services and provide a payment system to customers in Riel, while ensuring that Cambodians keep experiencing the most creative and innovative products & services meant for the improvement of their daily lives.

Surging ahead with Riel