The Labour Ministry has taken action against a brick factory in Kandal province after a nine-year-old labourer lost her arm as she was operating a brick-making machine.

In a statement on Monday, the Labour Ministry said upon hearing about the incident, ministry officials from the inspection department, along with National Social Security Fund and Kandal provincial labour officials, were deployed to inspect the site of the accident and take action against the factory.

“We fined the brick factory through Article 369 of the Labour Law and filed a complaint against its owner for using child labour,” it said, noting that NSSF officials helped the victim by providing medical treatment and physical rehabilitation.

“The ministry wants to remind those in the industry to know that they must comply with a directive issued in December 2007 regarding labour conditions and living standards within brick factories,” the statement added. “Employing a child under the age of 12 is illegal. Employing anyone under 18 without proper facilities is illegal.”

Ath Thorn, president of the Cambodian Labour Confederation, yesterday said he supports the ministry’s action against the brick factory.

Mr Thorn said the ministry should inspect all brick factories to ensure that children are not employed. 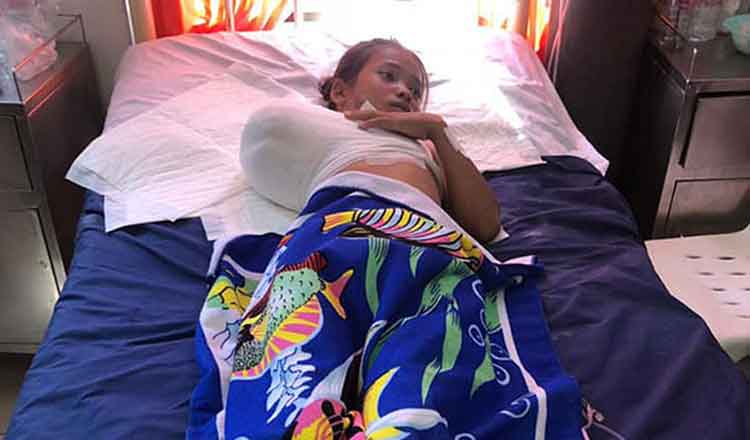 “I think it’s a good move made by the ministry, but I want to add that their officials still need to inspect companies and other brick factories to ensure that children are not at risk,” he said, noting that in the past, the ministry was not as attentive as today. “Previously, the ministry seemed like it did not pay much attention to those who are in the brick, construction and agriculture sectors.

Provincial police chief Major General Eav Chamroeun, who visited the victim in hospital, said her family was given about $1,500. He said the victim lost her right arm as she was making bricks on Saturday morning.

In June, Prime Minister Hun Sen told government officials to prevent the violation of children’s rights. He told officials that they should continue to raise awareness on child labour and actively discourage the practice in all economic sectors.

A Licadho report in 2016 said many children working in the brick manufacturing industry do so to help their parents, who are poor and often in debt bondage with brick factory owners.

The report said the practices of debt bondage and child labour “are closely related and together are responsible for trapping multiple generations of families in a repeating cycle of poverty and servitude”.