The United States says Cambodia should consider becoming a signatory to the Cape Town Convention, an international treaty that experts say will open access to the latest aviation technology and expand the international networks of local airlines.

Seeking to tout the benefits of joining the treaty, the US Embassy on Friday held the seminar ‘Aviation and the Cape Town Convention’ in Phnom Penh.

The event brought together representatives of global leaders in aviation – including Boeing, General Electric, Sikorsky Aircraft, Aircastle, Rossch, and CFM International – as well Cambodian officials and representative of the local aviation industry.

One of the objectives of the conference was to introduce US aviation companies to top players in the local aviation sector and facilitate business connections, according to Michael Newbill, charge d’affaires at the US Embassy.

Mr Newbill said the country has reached a stage of development that calls for more modern aviation infrastructure and services. Without that infrastructure in place, the country will not be able to support the rapid growth in air traffic it is now experiencing, he added.

“The key point I want to emphasise is that the adoption of the convention could allow Cambodia’s aviation companies to lease or buy airplanes and helicopters at a lower cost. This is something that could strengthen the sector as well as enable those companies to acquire some of the latest aviation technologies on the market,” he said.

“This would not only benefit the aviation sector, but also the tourism sector. It would be a win for Cambodia and a win for the people who want to visit this wonderful country.

“The purpose of this press conference today is to explain the medium and long-term economic benefits that the Cape Town Convention can bring – not just to this country but to the region and definitely to the public,” he added.

The Aircraft Protocol to the Cape Town Convention is an international framework for the formation, registration (through an international registry), protection and enforcement of certain international interests in airframes, aircraft engines, and helicopters. 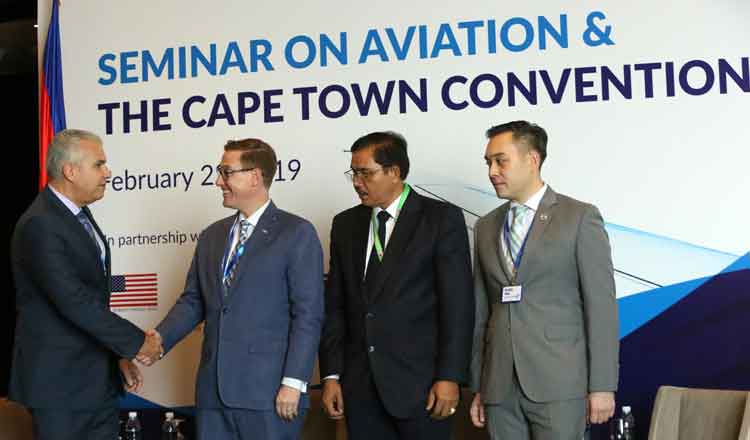 The convention is designed to overcome the problem of obtaining secure and readily enforceable rights in aircraft objects, which by their nature have no fixed location.

Paul Ng, chairman of the Cape Town Convention National Contact Group for Southeast Asia, said five Asean member states have already ratified the treaty – Vietnam, Myanmar, Malaysia Indonesia, and Singapore – and added that they are now in the process of helping other countries in the region ratify the agreement.

“If you look at Indonesia and Vietnam you can see that some of the airlines have benefited tremendously from the ratification of Cape Town.

“The conference today plays an important role to educate and convince the industry here that the government and the private sector should spend time and effort considering Cape Town because it is good for everyone – not just for the aviation industry but also for the public,” he added.

Sinn Chanserey Vutha, spokesman for the State Secretariat of Civil Aviation (SSCA), said the Kingdom is now considering becoming a member of the Cape Town Convention.

“The Cape Town Convention is very important, particularly for countries like Cambodia that are growing very fast. Some of its benefits include being able to lease aircraft at lower prices and a better line of communication with global players in the industry,” he said.

However, there are a number of roadblocks to membership. Mr Chanserey Vutha said the Kingdom lacks technical experts that can help revise the law so that it complies with the convention.

“Cambodia needs at least two years to prepare itself to join the convention,” he said.

As of 2018, the agreement has been ratified by 77 states – including China, Bhutan, Fiji, Australia, and India – as well as the European Union.