Home - Bringing back the lost villages

Bringing back the lost villages

During her childhood, Sao Sreymao hardly noticed her artistic talent because she usually received poor grades in art subjects. It is not that her paintings were bad; she just could not force herself to follow the specific topics given by her teachers. When one of them asked her to draw a picture of a standing dog, she drew a sitting one. At another time, she drew a picture of slices of a papaya when the teacher assigned her to draw an unsliced one.

In 1999, a few months after dropping out of school at Grade 7 due to her family’s financial hardship, Sreymao enrolled in the first-batch of a painting training programme provided by Phare Ponleu Selpak in Battambang, but she did that only because she did not know what to do with her life. Some lecturers even described her as “untalented” because she never learned to put aside her emotions in her works.

She used to think that her life was not filled with any great passion until she started engaging in activities upholding environment protection.

In 2007-2008, as one of the staff of Angkor Center for Conservation of Biodiversity (ACCB), Sreymao worked on environmental education with several communities in Koh Ro-Ngeav, Kratie province, known as the largest island on Cambodia’s Mekong. Back then, she had to live with the local villagers and before long fell in love with their way of living.

Sreymao says she found peace and serenity with the simple life of the people on Koh Ro-Ngeav, especially on how they interacted with one another and their ecosystems. She also loved the way they built their dwellings with local materials and cook what Mother Nature provided them.

“They are not rich, but they shared what they had, and they lived happily with their nature,” Sreymao says. “I remember they caught fish as big as my thigh with just a bamboo rod.”

In 2017, when Sreymao returned to the local villages after nearly a decade of being apart, she witnessed the disappearance of the loving community. The villages which were once full of life became deserted. Most of the elders she knew had passed away while most adults had to move to nearby provinces or neighbouring country for job opportunities in large plantation or factories, leaving their children in their parents’ care. 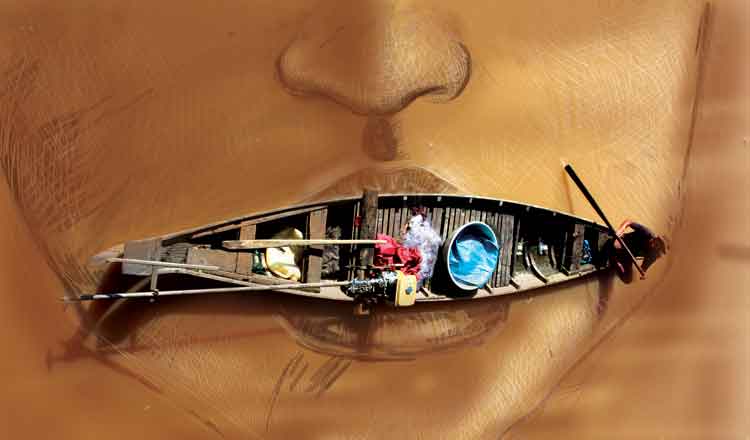 “I asked around about the cause, and they told me that was because they could no longer catch as many fish as before,” Sreymao says. “I did some research and found that the root cause is the deterioration of the entire ecosystem.”

While climate change and overfishing for commercial purposes were responsible for the depletion of the fishing stocks, the entire village in Srekor was totally submerged after the newly constructed, downstream Lower Sesan 2 Dam closed its gates a few months earlier. Approximately 5000 people, including many indigenous Punong, who lived by the banks of Sesan River for generations, were forced to relocate.

“I wanted to bring back the village and all the lost memories, but there is no way I can,” Sreymao says. “Then I decided that at least I had to express my sadness through my paintings.”

Under the support of Dam Dos Grant of Cambodian Living Art, Sreymao spent one year to establish a collection of artworks which she calls “Under the Water”, in memory of the submerged Srekor Village. The collection contains photographs of the villages by the river banks overlaid with sketches of “once supposed to be lively scenes”. 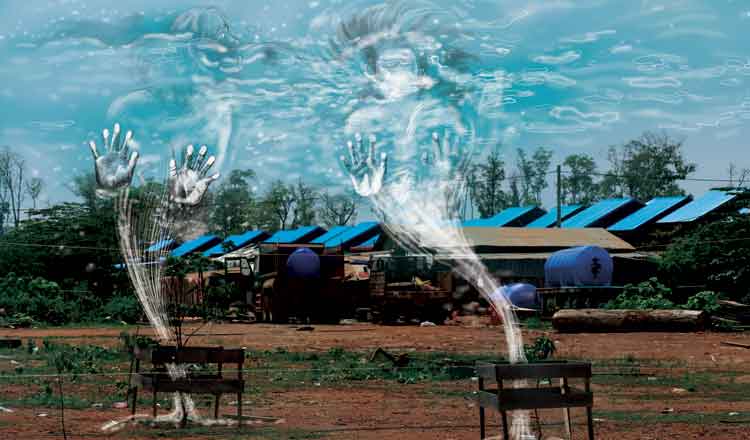 The contrasting white drawings at once erase the photographic images of the present while recalling the past. The pictures seem to yearn for a continuity of time and life that have been disrupted, while also offering an imagined possibility of one. In addition, “Under the Water” also includes a new installation work: a cluster of small houses and human sculptures made of candle wax on a sheet of reflecting mirror.

“The pictures reflect my happy memories while living Koh Ro-Ngeav while the installation implies the fact that the requirement of energy has led to a disappearance of an entire village,” Seymao adds.

“That is how art should be, I believe. For me, an artist should use his or her work to express his or her feeling and experience in an ambiguous way instead of sticking to a patron’s order.”

“Under the Water” was exhibited twice: first at Sar Sar Project from October to December in 2018, as Sreymao’s first solo, and second at Siem Reap’s MIRAGE Contemporary Art Space, which ended on Tuesday. At the opening of both exhibitions, the artist’s installations were burned down with fire, suggesting a contradictory consequence of the energy source. As it was melting down, the candle wax created a picture of the River which had both given life to the villagers and taken their village away.

Serey Siv, the director of the MIRAGE, describes “Under the Water” as “unusual because of the mixed media she uses” and looks forward to working with her in future projects.

“In each picture, you can see a different depiction of the water, making us think about (the repercussions) of the broken dam.” 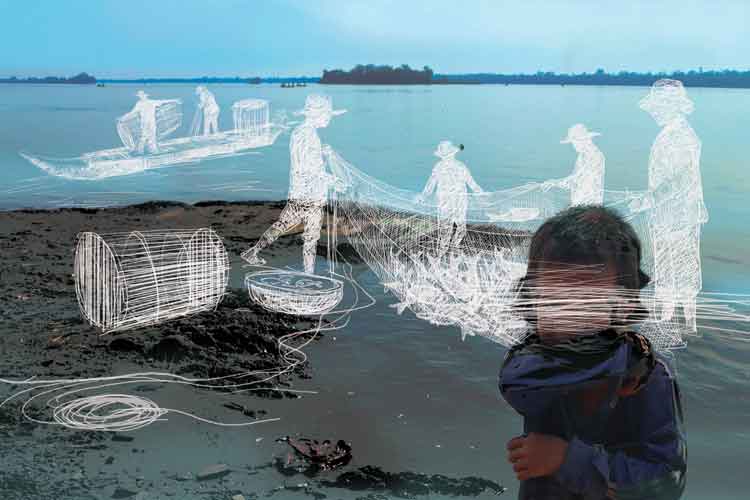 Sreymao, the artist, says she wishes her artworks would draw public attention to the environmental issues, which have considerable impact not only on people’s livelihood but also on culture and tradition.

“Usually, people do not know how priceless a thing can be until they lose it forever.”

In Focus: Small-scale fisheries in Asia