To provide a wider and bigger avenue for Cambodian youths to show and prove their knowledge and skills in STEM, the Honda Foundation led a research competition on Ecological Technology among students who have the capabilities to design projects that deal with environmental concerns such as farming.

After an extensive and stiff competition, four young Cambodians were awarded on February 16 for their exemplary research outputs on sustainable development of the environment in the Kingdom. The foundation handed the Y-E-S Awards to Ly Buntheng, Song Vergenylundy, Sok Sothearath and Sok Somalay. 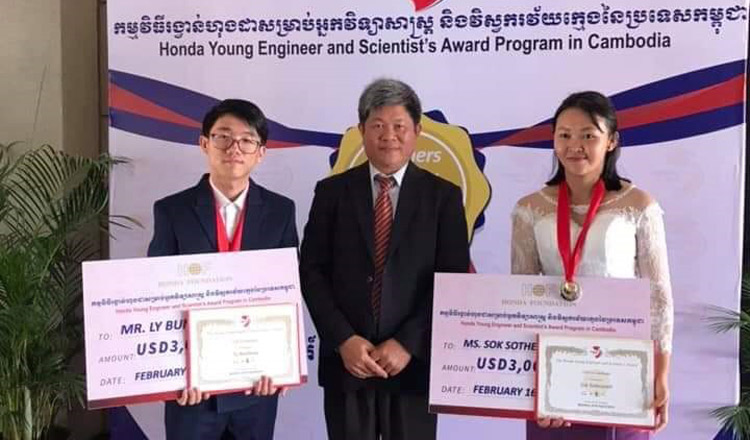 The programme hopes to promote dissemination of eco-technology among the young generation and at the same time to strengthen interaction and exchange between Japanese youths and young Cambodians who are expected to lead science, technology and industry in their respective countries. Another very unique characteristic of the system is that its details are matched to the receiving country’s needs and circumstances; it is set up to be flexible to each country’s needs.

In Y-E-S Awards, students undergo many level of processes which challenge them to face many academic hurdles head on and to embrace the different facets of science.

Sok Sothearath, 23-year-old student of Royal University of Agriculture and one of this year’s winner in the research competition, shared with Youth Today her inspiration behind her research.

“A lecturer in my school encouraged and assisted me to create a great output. That has been my greatest source of inspiration to overcome all the challenges in the competition. Plus, seeing Cambodian farmers go through tough times in agriculture is also my motivating factor. I want to create my own solution to the agricultural problems in Cambodia and teach farmers some ways to make their work easier.”

Song Vergenylundy, another winner of Y-E-S, also expressed his enthusiasm in science and technology when he received his award.

“I have learned a lot from this research competition. The learnings allowed me to understand more about the field of science and technology in a deeper context and this competition also gave me the opportunity to show my research findings to the public. I strongly hope that this will contribute a lot in our society,” said the Institute of Technology of Cambodia student.

Vergenylundy further noted that he aims to inspire the next generation of Cambodians to be more determined and persevered in reaching their goals, especially if they are working on contributing something significant to the society.

“I have failed many times before I reached this moment. I stand here in front of you today because I didn’t give up. So to all my fellow junior students who have come to give us support and congratulate us in our success here, I strongly hope that you will also have the courage to follow your dreams. Believe in yourself and don’t give up. There will be times when you’ll underestimate your capacity which will lead to missed opportunities. You should give it a try first and if you fail, learn from it because if you’re waiting until you feel talented enough to make it, you’ll never make it.”

Sothearath, Vergenylundy and the other two Y-E-S Awards winners will now have the chance to apply for the second programme, “Y-E-S AWARD PLUS”, which will grant them a non-restricted additional fund of USD10, 000 for their postgraduate studies including master’s or doctoral courses at universities in Japan for more than one year.

The research outputs of the awardees will be given to their respective universities for the next generation and other students to read and do more research on.