Home - The Night of the Gun

The Night of the Gun

I came across David Carr in a documentary film called “Page One: Inside the New York Times”, concerning journalism and the future of one of the most beloved newspaper agencies, The New York Times. Despite his blunt no-bullshit personality, Carr was a sweetheart. He was funny, charming, humble, and exceptionally intelligent.

When he was in his 30s, David Carr dealt with severe addictions to drugs (mainly cocaine) and alcoholism. His excessive dependency to substance abuse had caused him unimaginable destructive relationships in social, romantic, familial, and professional circles.

On occasions, he considered himself a loser, a destruction to human kind. I, on the other hand, find his struggle with drug and alcohol addiction and his past behaviours to be ridiculously endearing. Moreover, he did manage to pull through hell and became a powerfully inspiring journalist, single parent of twin girls (later on another daughter), and loving family man.

Being addicted to any substance abuse is tough. Carr’s addiction took over most parts of his life. He was so out of control to a point where he actually pointed a gun to his buddy’s head. That’s how the title of the book got to be, “The Night of the Gun”. 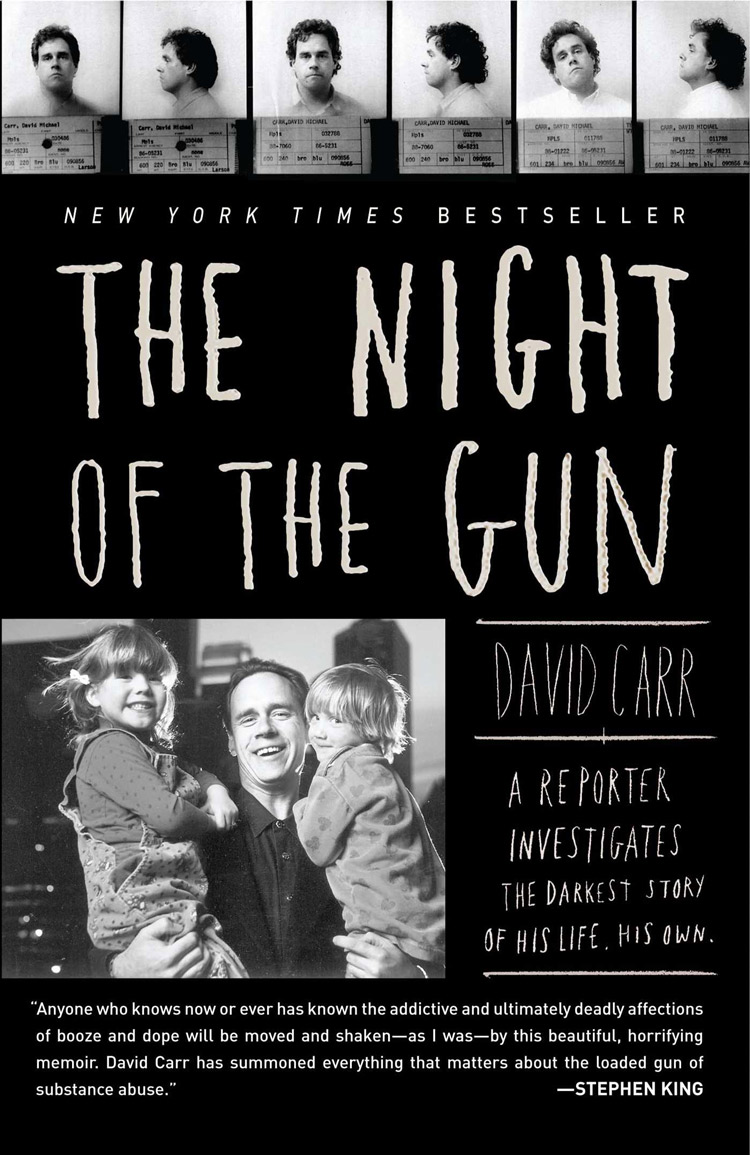 For years, he thought the incident was the other way around, that it was his buddy who was pointing the gun to his head. Either way, the incident left Carr with so much guilt. He started his journey searching for the truth by seeking people who crossed path with him during his heavy drug use. Like a good journalist he was, Carr spent three years collecting reports and fact-checking using video-tapes and his past legal and medical records.

I admire his decision and style of writing. First off, it’s never easy trying to dig out one’s own past especially when one goes through what Carr went through as an addict. Moreover, addiction can severely ruin one’s memory and sense of reality, using journalism technique to fact-check is a really wise choice to gather as much truth as possible.

After 14 years of sobriety, Carr went back to finding excessive comfort with alcohol. It started with leftover drinks in his kitchen to hiding alcoholic beverages in his bag. The relapse was severe to a point of a couple more arrests. Despite his helpless addiction, Carr was able to produce remarkable journalistic pieces and submitted them on time.

Despite his blunt personality, Carr delivered a rather soft tone to his writing when he described the people in his life, no matter how frustrating it may seem to do so in certain situations.

After some unsuccessful attempts to get sober, Carr finally pulled through but then got diagnosed with lung cancer in his 30s, and survived through a couple more decades before he collapsed in The New York Times newsroom in 2015.