Home - Brouhaha over imaginary naval base

Brouhaha over imaginary naval base

According to the Constitution, Cambodia has three-NO foreign policies: no foreign interference, no treaty alliance, and no foreign military bases. Cambodia’s foreign policy has been consistent and firm with regards to its independence, sovereignty and neutrality.

In response to the rumour created and spread first by a report by C4ADS, a supposedly nonprofit organisation dedicated to providing data-driven analysis and evidence-based reporting on global conflict and transnational security issues, the Cambodian government has clarified many times, both in verbal and written forms, that there would be no foreign military bases allowed in Cambodia. Yet it seems like “pouring water onto the head of a duck” when it comes to explaining the case to the US because the key word here is “evidence based”. The United States has many sophisticated satellites which could easily pick up any signs of a construction of a naval base, let alone a commercial port.

It has become so nonsensical and utterly idiotic when Dan Coats, Director of National Intelligence of the United States, said on January 29 that Cambodia would amend its constitution to allow a Chinese military base to be erected in its territory. This is completely a baseless conclusion by the US intelligence agency.

The question is why the US has not been convinced by Cambodia and keeps spreading such rumour. There are four main motives for the US behaviour.

First, the US is taking measures to counterbalance the fast-growing Chinese influence in the Kingdom, including providing support to the opposition movement and some civil society organisations to destabilise and delegitimise the current government. The US perceives that Cambodia has lost its independent and neutral foreign policy and has become a client state of China.

Second, the US aims to harm the image and role of Cambodia within Asean. By naming, accusing and shaming Cambodia as a perceived client state of China, the US could sideline or marginalise Cambodia within Asean. For instance, some strategic allies of the United States in Southeast Asia have accused Cambodia of being too inclined to China with regard to disputes in the South China Sea.

Third, the US aims to create strategic distrust between Cambodia and its two big neighbours, Thailand and Vietnam, which still have some outstanding border issues with Cambodia. Vietnam in particular has raised concerns over the rumour and Prime Minister Hun Sen has directly clarified Cambodia’s position to Vietnamese leaders several times

Fourth, the United States aims to destabilise Cambodia by instigating anti-China nationalism, together with the opposition movement led by Sam Rainsy and his clique. This is a dangerous move as any attempts to fuel anti-China nationalism in Cambodia, similar to what happened to Vietnam in 2014, will derail people-to-people ties between the two countries, which in turn will lead to anti-China protests across the country.

The fact of the matter remains the same. The project is yet to be finished and the plan to have a deep-water seaport to possibly accommodate container ships is simply another infrastructure project which could fit China’s Belt and Road Initiative (BRI). There is nothing wrong for a sovereign state to develop mega infrastructure as an economic rationale. 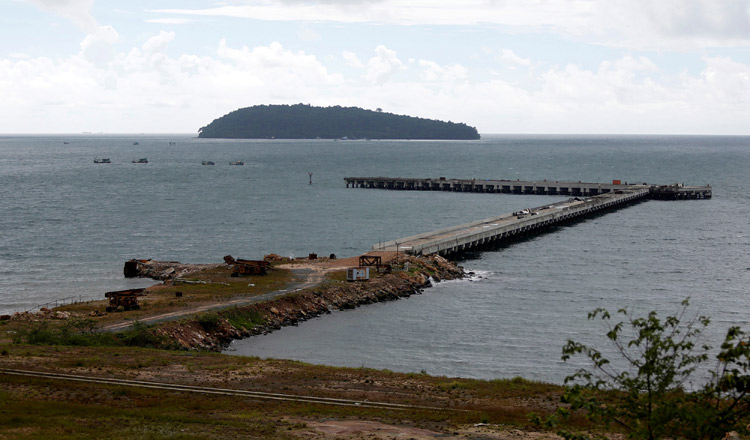 Deep seaports could also help boost Cambodia’s weak maritime capabilities in helping the development of maritime interests, including offshore energy fields where there are stake holders from Asian and Western companies.

With all these said, now, what should Cambodia do to prevent such bad intentions from a superpower?

First, it needs to strengthen unity within the party, state and society. Foreign interference works when different political factions in Cambodia invite foreign powers to intervene under the skewed banner of democracy and human rights. Cambodia remains vulnerable to foreign intervention and instability.

Second, it needs to strengthen a command and control structure within the armed forces. Loyalty to the state is of paramount importance at this moment. Foreign powers normally use a two-pronged approach to topple a legitimate government: stirring people’s protests and convincing military leaders to support the “people’s movement”. Given past instances, there is a genuine fear of this in Cambodia.

Third, it must take all measures to strengthen public trust in the government through delivering concrete reform results. It is high time for Prime Minister Hun Sen to root out bad elements within the governance system. Nepotism and corruption are the main root causes of regime collapse.

Fourth, it should invest more effort in public diplomacy and media engagement. Public perception matters in national security issues and maintaining social stability. The political situation can be improved if people have a broad and objective understanding of the issues they are facing. Hence the government must be more transparent in order to make the public understand its policy and intention.

Cambodia is now in serious confrontation with the US. The bilateral relationship is at the lowest point since the resumption of diplomatic ties in early 1990s. This is due to the US’s arrogance and ignorance. The US looks at international politics in Southeast Asia from a Cold War perspective. There is no such thing as win-win cooperation or solutions in the US’s foreign policy playbook, especially under the transactional politics being played out by Donald Trump’s administration.

Cambodia is at a critical turning point. If the Cambodian people and politicians alike are not united under the banner of the Constitution and the Monarchy, the country will face instability and crisis. Cambodia must rely on itself to protect its sovereignty and independence, while deepening comprehensive strategic partnerships with Asian partners and Asean.

Confronting the US is like “hitting the egg against the wall”. However, Cambodian people must remember that nothing is more valuable than peace, independence, sovereignty, and self-determination. Cambodians need to stand up together against foreign intervention and make the country’s socio-economic foundation strong and resilient.

Post-EBA: It is time to build economic resilience