The World Wildlife Fund has called on police to conduct a thorough investigation into who shot and injured park ranger Cheng Chanty during a patrol of the Sre Pok protected area in Mondulkiri province last week.

WWF Cambodia and the provincial environment department issued a statement on Wednesday expressing sympathy for Mr Chanty, adding that police must arrest the perpetrators responsible for the shooting.

“WWF remains committed to working closely with the government in order to ensure rangers are equipped with the knowledge and skills to stay safe while doing their jobs,” WWF country director Seng Teak said in the statement. “We will continue to support the protection of Cambodia’s natural resources.”

“This unfortunate incident is one example of how illegal wildlife and logging activities have tragic impacts on biodiversity and people. They must immediately be stopped,” he added. “We are alarmed by the violence of the crime committed against brave law enforcement officials who were fulfilling their duty and mission. We urge the authorities to take necessary actions to bring the criminals to justice.”

The incident happened at about 3.30am on Tuesday when Mr Chanty and five other rangers encountered a group of six poachers during a patrol. A firefight broke out and Mr Chanty was shot in the left thigh. The rangers retreated and rushed the victim to hospital.

Mr Chanty is currently receiving treatment in a hospital in Phnom Penh.

Mr Chanty, who was lucky the bullet did not hit his bone, is expected to be discharged in about four days and will have to recover at home for one month before returning to work. 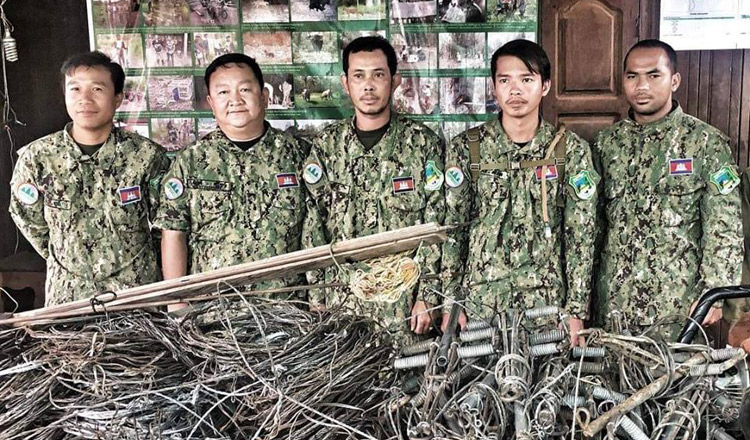 Environment Ministry spokesman Neth Pheaktra said the ministry will cooperate with police to investigate the shooting.

“A working group was established to cooperate with provincial authorities during their investigation,” Mr Pheaktra said. “Our rangers play a key role in the conservation of forests and wildlife, but they are at risk of running into poachers and illegal loggers.”

“We are extremely concerned about what happened,” he added. “This case will continue to be investigated and the criminals will soon be brought to justice.”

In February last year, a military officer, a park ranger and a Wildlife Conservation Society staffer were shot dead during a patrol in the same province.

Three other suspects – Chheang Vannith, Lay Savy and Torn Theara – were charged with forestry crimes. All six are now in pretrial detention.

Last year, the court said the case was still under investigation and a trial date has not been set.

Major General Lor Sokha, chief of Mondukiri provincial police, could not be reached for comment.