Home - What is Chinese New Year without a Lion Dance?

What is Chinese New Year without a Lion Dance?

They have no high poles for them to dance on. There is not a large space for them to roll around. None of them speak even one Chinese word. Yet, Lokta Svar Lion Dance Association is going through blood, sweat and tears to indulge their passion for this Chinese traditional dance, known in Cambodia as ‘mong say’. It’s customarily performed during Chinese New Year and is said to chase away evil spirits and bring happiness, longevity and good luck. Taing Rinith goes to their lion-awakening ritual and sees the group’s fervour for this foreign art.

On Sunday last week, at least a hundred people were gathered at a medium-size shophouse in a small neighbourhood of Chak Angre Krom. Everyone in the area knows that this dwelling is the headquarters of the Lokta Svar Lion Dance, and these people were there to celebrate their annual “Open the Lions’ Eyes” ritual.

In front of the shrine of Lokta Svar, a Chinese neak ta, or divine spirit believed to be Sun Wukong, the Monkey King from the Chinese classic “Journey to the West”, lay a pair of Nán shī or Southern lions, controlled by four dancers. Just before them was 32-year-old Tol Raksmey, the president of the association, dressed in a gold robe and a gold cape topped with two long tails. 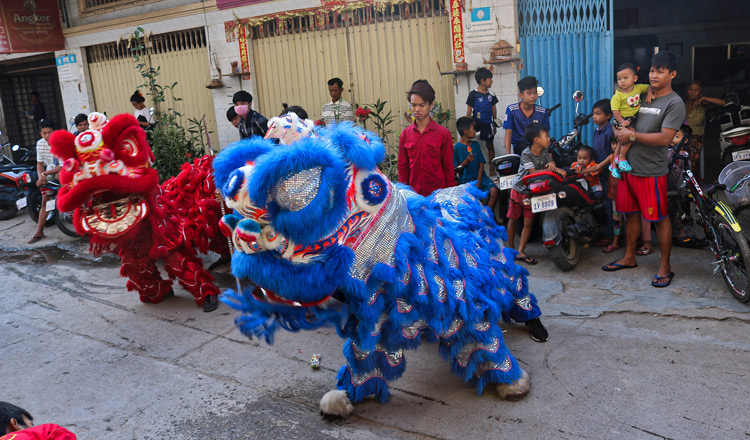 As the drums started beating, Raksmey began shuddering and scratching himself like a monkey, an action implying that his body was possessed by Lokta Svar. At the same time, the two lions started moving their heads around, stomping their feet. With all haste, Rakmey grabbed a short sword and slashed his tongue, and then used the blood to make some strokes on the lions’ eyes, in their mouths, behind their ears and on their backs with a writing brush.

“I do not feel the pain,” said Raksmey after the ritual, a short period of unconsciousness and a few drinks. “Lok Ta Svar was inside me to bless our new lions so that they will bring good luck to the people who asked them to dance at their houses or shops.”

After the blessing from the other four Chinese neak ta mediums, who along with Louta Svar are known as the Five Generals of Phnom Penh, the two lions gave a performance to the residents in the neighbourhood. The dancers showed their athletic skills by making their lions walk on two feet, roll and jump around on the ground, and play and fight with one another. Some of the children tried to touch the dancing lions, while others got scared and cried.

Song Nhy, a 67-year-old retiree who was in the audience, said she has been a keen fan of the Lion Dance, thanks to its demonstration of athleticism and anthropomorphism, or the attribution of human traits into the lions.

“When I was a kid, I also watched the Lion Dance performed by Chinese or Vietnamese men,” she told Good Times2.

“Our neighbourhood’s troupe give the same level of performance like the Chinese and Vietnamese people did in Cambodia during the 60s and 70s, but our dancers are all Khmer.”

When the Lion Dance or mong say came to Cambodia, however, is unknown. What people know is that the art came with the Chinese immigrants who have entered Cambodia throughout history and has passed from one generation to another by Chinese Cambodians.

It has been almost 15 years since Raksmey left the Lion Dance troupe of Chak Angre Chinese Monastery and started his own troupe, just after he had realised that he was “chosen by Lokta Svar to be his medium”. He said the lion dance has been his passion and lifelong devotion since he was a young boy, despite not being of Chinese or Vietnamese descent.

“I started learning to perform the Lion Dance when I was about 10 years old from a Chinese coach,” Raksmey shared. “A few years later, when I knew enough to coach others, I began to dream about a mong say troupe made up of only Cambodian dancers.”

Rakmey has made his dancers jump through hoops, with a harsh and strict training schedule, but their numbers have been gradually increasing. Currently, Lokta Svar Lion Dance Association has about 30 dancers, all young men in their late teens and early 20s.

Sixteen-year-old Meas Oudom, one of the dancers, said he wants to make a name as a Cambodian Lion Dance master, and he is ready to work hard to overcome all kind of challenges to fulfill his dream.

“My family said that what I am doing is pointless and a childish fantasy, but I feel it is a must for people to follow their passion,” he said. “If those in other countries can do it, we can also do it here.” 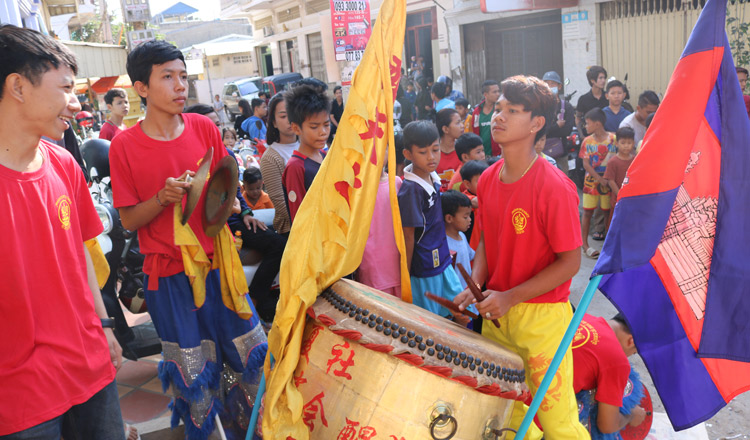 Thay Karona, 18, another dancer from Raksmey’s association, dreams of competing and winning in the Genting World Lion Dance Championships, a title currently held by winner Kun Seng Keng from Malaysia, which hosts the competition every two years.

“It may sound a bit unrealistic for now, but I want to prove that we Cambodians cannot only be excellent at our traditional art but also all kinds of art in general,” Karona said. “However, things may change in the future, and it is also possible that I may give this up one day.”

Oudom and Karona’s dreams seem to be far-fetched right now as their association is in short of cash and resources to expand itself. Currently, they only have six lion costumes, which were bought from Malaysia and costs around $800 each. The association also does not have their own grounds for training.

All the income from performances during the Chinese New Year and at some joyful occasions outside of the festival, such as the opening ceremonies of businesses, go to the association’s fund. The dancers are usually paid with the ang-pau (red-packet) envelopes from the clients out of generosity, which means the dancers have to depend on other jobs to survive – not to mention they have to compete with large troupes run by the Chinese and Vietnamese.

However, as the Chinese New Year approaches, Raksmey speculates that his association will gain a larger share of the seasonal demand, with the recent huge increase of Chinese people and business in Cambodia due to the country’s booming economy. More money, he added, would allow him to find a proper place for his association and his students to train.

“Some people criticise me for supporting a foreign art when I am Cambodian. But I feel that passion should not be limited by nationalism,” Raksmey said. “Also, in this modern age of globalisation, nations affect one another, and art is not an exception.”

“As long as people like it, we should keep doing it.”