In a speech commemorating the 20th anniversary of the Royal Cambodian Army yesterday, Prime Minister Hun Sen said he was personally targeted by his political opponents in the mid-1990s during two attempts to oust him from power.

The RCA held a parade of thousands of troops and a wide array of weapons and heavy armour to mark the anniversary.

Mr Hun Sen was joined by RCA commander Lieutenant General Hun Manet, who addressed his troops prior to the Premier.

Mr Hun Sen arrived at 8am to attend a Buddhist ceremony before inspecting the troops.

In his speech, Mr Hun Sen said when he first began his career as Prime Minister, his opponents attempted to seize power from him twice: once via house arrest and another during an attempted coup d’état.

He said that in June 1993, he was placed under house arrest shortly after the United Nations Transitional Authority in Cambodia organised the Kingdom’s first election after the signing of the Paris Peace Accords in 1991.

“On June 2, 1993, His Excellency Pol Saroeun was detained at a house; then I was detained because I had gotten careless when I was travelling,” he said. “I was put in house arrest. I told the people who were detaining me to avoid bloodshed. I told them that I would transfer power.”

“This was all because of those who did not acknowledge the result of the election. Their way of solving things was to detain Prime Minister Hun Sen, who was the best strategist who came from the Cambodian People’s Party,” Mr Hun Sen added. “I told them that in order to avoid bloodshed, I would resign by 6pm that day and the existence of the State of Kampuchea’s National Assembly would then become reality – ‘please vote to elect a new Prime Minister’.”

“When they arrived, I told them of my intention to resign. Tea Banh and Ke Kim Yan reacted strongly and said there would be bloodshed if I resigned,” he said. “The attempt to destroy the 1993 election result was unsuccessful because of their help.”

“That is why I still urge for the recognition of the election results, even if the UNTAC election was dirty, we still had to recognise the results,” Mr Hun Sen said, thanking Mr Banh and Mr Kim Yan who were in attendance. “It was my own stubbornness that got me detained.”

The first national election was in May 1993 and it resulted in Funcinpec winning 58 out of 120 National Assembly seats, while the CPP received 51. The rest of the seats went to the Buddhist Liberal Democratic and Molinaka parties.

“In July 1994, there was a coup attempt – and also an attempt to detain me again. It was all reflective of their desire to destroy what we had achieved,” he said. “Prince Norodom Ranariddh wanted to have me arrested and detained in Prey Veng province.”

The factional fighting resulted in the ousting of Prince Ranariddh and dozens of people were killed. Mr Hun Sen yesterday called for the end of all attempts to overthrow him from power.

“I want to say this again. Do not let another coup occur like the one that occurred in the 1970s that resulted in the ousting of Prince Norodom Sihanouk,” he said. “This was my secret, this was why I had to strengthen our forces and why I had to have a firm hold on decision-making.”

Mr Hun Sen noted that the army will eliminate any attempt at a colour revolution.

“Please work hard to prevent terrorism, and destroy those who back the colour revolution because those people are attempting to topple a legally-elected government,” he said. “The armed forces have the right to defend the state, so the word neutral cannot be used when it comes to dealing with rebels in cities and rebels in forests.” 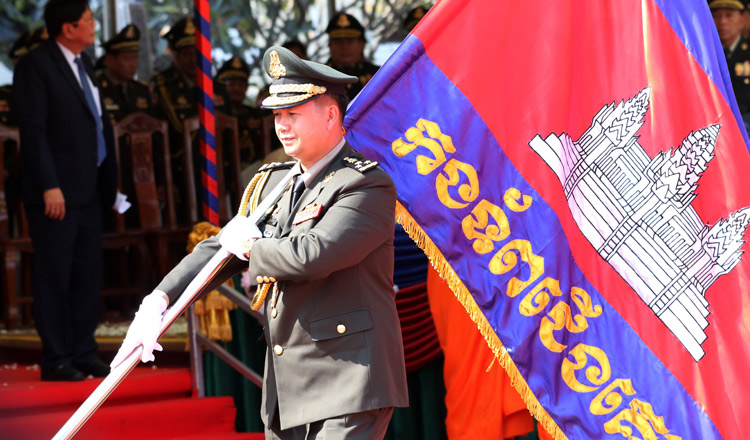 “We must destroy them immediately without waiting for an order because they are attempting to grab power in a democratic system,” Mr Hun Sen added. “The army can only be neutral when dealing with politics. It is better for four or five people to die rather than the death of thousands, or hundreds of thousands or millions of people. I will not hesitate to destroy forces attempting to topple the government.”

“This case happened a long time ago – it’s been about 25 years,” Mr Sothearith said. “The political situation has changed since then, we have peace now.”

RCA Commander Lt Gen Manet said in his speech that the army was first formed on November 9, 1953. However, the army would only begin to become what it is today on January 24, 1999.

“Through the duty of defending nation, king and religion, the RCA has faced many tests,” Lt Gen Manet said. “But we were still able to build and develop our nation and maintain the peace and security of our motherland and people.”

“We are committed to eliminating any conspiracies attempting to destroy peace through the creation of a colour revolution in Cambodia,” he added. “We are absolutely against external interference into Cambodia’s internal affairs.”

Cheats chucked back to China